Wow. You all are johnny on the spot with your watch findings/ideas! My grandma texted me first thing this morning and said she was putting money in the mail for Eli to get a Polar Express watch, which is beyond nice. That boy is one loved Polar Express fan. I will keep you updated I know you are on the edge of your seat.

Finding a Polar Express watch has been the highlight of our week here in the Tree house.

At the beginning of last week Annie started coming down with some sort of cold.  I thought for sure she was teething. She had a runny nose and was very cranky. While I was sure it was teething I didn't want to take any chances so I wore her on my back while I taught kid's church on Sunday. No need to infect the other kids in the nursery if she was contagious. 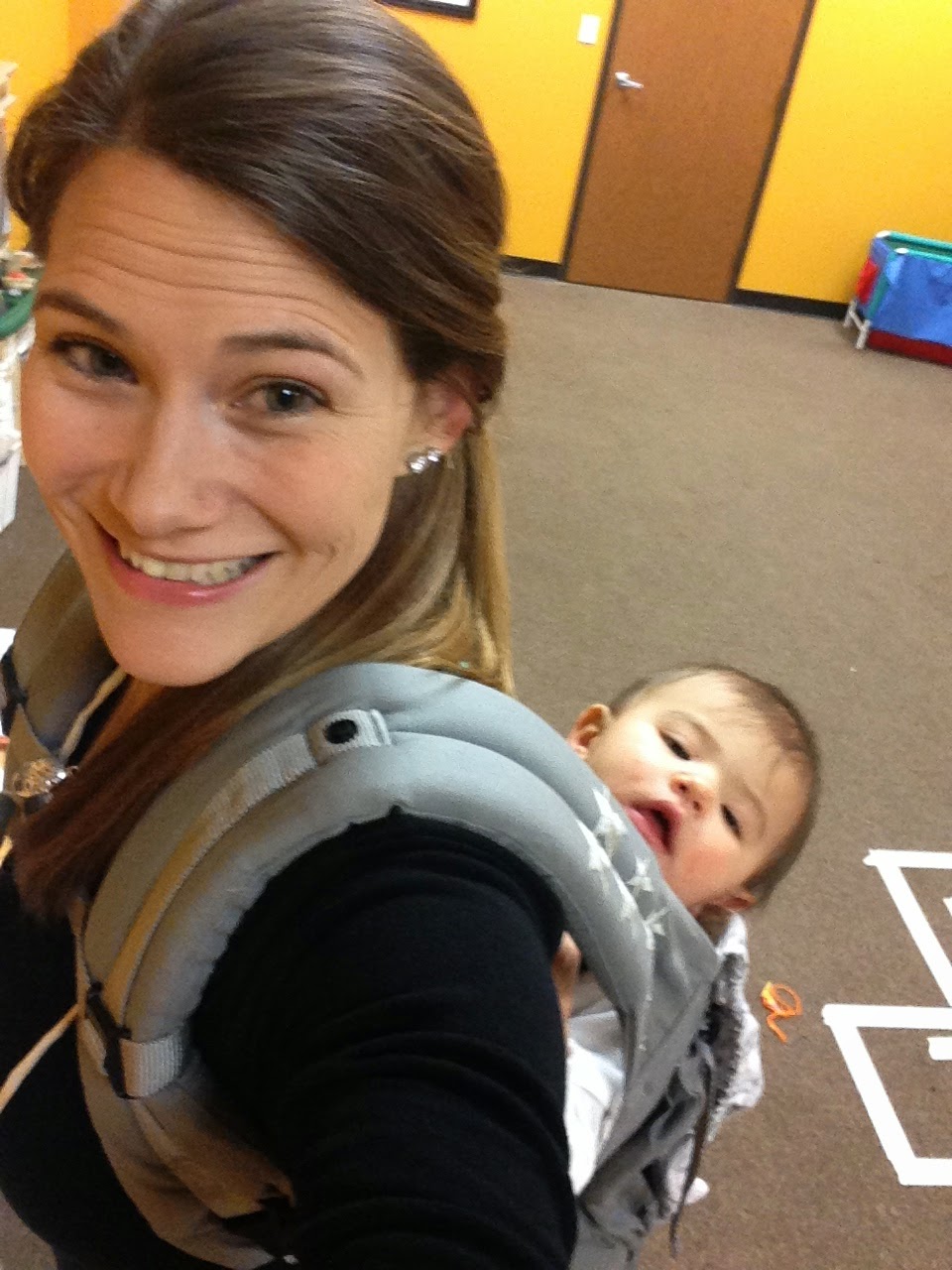 I'm glad I didn't put her in the nursery because later that day she started coughing and by Monday morning it was evident that it wasn't just teething and she needed to go to the doctor. I made an afternoon appointment and we headed to the doctor's office.

Oh before I talk about her doctor appointment I should explain that three days a week I wake up at 5:30 to go to boot-camp. There are nights were I don't go to sleep until 12:30 or 1:00 and usually wake up around 3:00 to feed Annie. So basically I'm not getting a ton of sleep but I've always been able to function on little sleep. Also on the days when I go to boot-camp I shower, this is important to remember for the next part of my story.

During Annie's doctor appointment I informed the doctor that she was still nursing every three hours, I wanted to know if this was normal at almost 11 months of age. He asked me "does she do this during the night also?", to which I replied "YES". I thought he was going to give me some wise advice or cure for getting her to quit, but instead he very matter of factly said "wow no wonder you look so exhausted."

I thought I was doing good on this Monday. I mean I was dressed and had actually showered. I flipping blow dried my hair for goodness sakes. Apparently these things do not mask the look of exhaustion.

We carried on with our appointment and I left with the self-prescription of getting more rest, OBVIOUSLY.

Fast forward two days to Wednesday and I'm at Eli's school. I picked him up from his classroom and then we headed to the water fountain where we always go because apparently drinking out of a germ infested water fountain is the thrill of Eli's day. As Eli was drinking a friend walked up and we started talking. It was probably a minute to two minutes total. I turned around to get Eli to leave and he was gone.

There wasn't a child in sight. I tried not to panic at first because really what good would that do, but after searching everywhere around us and going in the bathrooms (including walking in on a man at the urinal, sorry sir) I was about to panic. There was no sight of Eli.

My friend and I began going up and down the hall, looking into classrooms, wondering if he had gone back into his classroom for something. My friend ran out into the parking lot and just when I thought I was going to cry she came walking up the stairs with Eli.

She found him at the other end of the parking lot with another mom who was trying to help him find his mom. The whole ordeal was about three minutes but it was a terrifying three minutes. When I asked him why he went out there he said he thought I would come later. We had a LONG talk about that one.

Now we are at Thursday. Our morning was normal and Annie went down for her 9:30 morning nap like normal. However she slept longer than normal which seemed a bit odd. Around noon I went in to check on her and found her just lying on her tummy looking straight ahead. This is not normal for her, she usually screams to get out of her crib the second she wakes up. I scooped her up and immediately knew that she had a fever. I took her temp and sure enough it was 102+. Worried that maybe she had the flu I made another doctor's appointment.

So back to the land of germs and sickness we went. That place gives me the heebie jeebies during winter, so many people hacking and looking like they are on their death bed. Not where I want to be.

We met with the doctor and I explained Annie's symptoms and blah blah. He tested her for the flu which she didn't have and he started typing something on his computer. Then he looked at me AND SAID...

"mom you look tired are you tired?"

I can't even make this up. Apparently I am a walking HOT MESS and my pediatrician is the only person with enough guts to give it to me straight.

I just said "yes I'm tired". I really wanted to explain about the sick baby, and child wandering in the parking lot, and how awesome I am for going to boot-camp, and how I stay up late watching Netflix because I'm dumb and blah blah. But I just smiled and made a mental note to tell everybody in my life they are LIARS when I ask them if I look tired.

Actually I've never asked anybody if I look tired, but now I know. I look exhausted.

For the record I love our pedi, and I'm pretty sure he was just trying to make conversation, but now that I've been told twice in one week that I look exhausted I plan on getting more rest next week.

And possibly new makeup. Or actually I'll just start wearing makeup again. Regardless next time we go to the doctor I'm going to make sure I look bright eyed and busy tailed!