After some debating back and forth I decided to combine Eli and Annie's birthday parties and just do a joint party.

Their birthdays are only nine days apart so it just kind of makes sense. Well at least it does this first year when neither one has a big opinion about their birthday. Annie of course doesn't care. And Eli just wants a birthday that has a Polar Express cake and his best friends there.

So joint party it is. A combination of trains and girly things with a little Polar Express thrown in without the Christmas part. Piece of cake.

Oh also while trying to spend as little money as possible. Easy peasy.

And in case you are wondering there aren't many ideas on Pinterest for a train/pink girly/first birthday/fourth birthday/polar express/no Christmas though party. It's sort of like a shot in the dark.

Which is probably better that way. Pinterest is a scary place. A black hole of a scary place. You go looking for a fun train game and pretty soon you are crying in the corner because you don't have 5K to put towards a child's birthday party.

And then you come back to reality. Simple. Simple it is. Christmas trains and girly things in March. Simple.

But at the end of the day it's all about celebrating their little lives. One year behind them, one year ahead of them.

I went upstairs tonight to look at each child sleeping peacefully, I usually go up there before I go to bed just to look at them, pray over them, and pray that Annie stays asleep longer than two more hours. Some prayers are just left unanswered.

Tonight while looking at Eli it hit me, he's not a baby anymore. I'm not sure what it was. Maybe the way he was lying, or the way his hair was flat on his head instead of sticking up all around like it sometimes does, but I realized my baby is becoming a big boy.

And really, maybe he already is a big boy, but to me he will always be my baby. The baby that made me a mom. I studied him while he slept. Looking at his hands wondering what work they would one day do, who he would become, what traits of his personality will stick around and what traits will he outgrow.

It was just a quick moment, I didn't linger long, but still a reminder that with each passing day he's a little bit older. Something I'm thankful for while still trying to hold onto the baby parts of him.

Then just last week Annie has realized she enjoys walking more than crawling. She has been taking steps for awhile but until a few days ago she crawled more than she walked. Now she has started walking more than crawling. And I can't believe it. Because it feels like she was just born yesterday. So I watch her walking and wonder where those feet will take her in life. Where will they carry her and how far will they go? The selfish part of me hopes not too far from home, but time will tell.

So as I'm planning this birthday party that could end up a jumbled disaster I'm going to remember that it's celebrating my babies and they don't care what that looks like. Well that's a little bit of a lie because Eli has told me more than 10 times that he NEEEEEEDS a polar express cake.

I asked Luke if he would wear this outfit for the party, he said he would think about it. 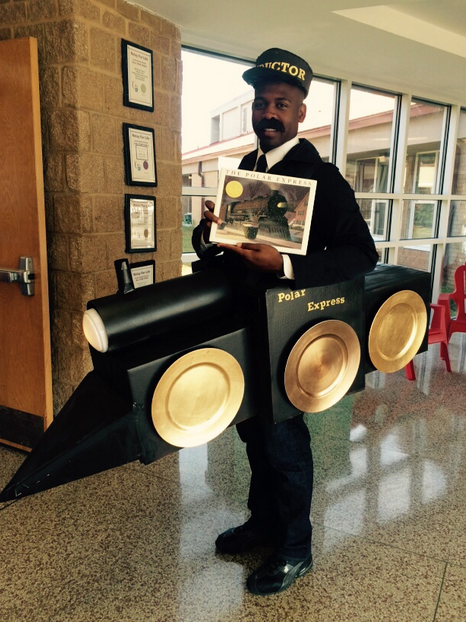 I seriously think it's so cool.