Now that our sweet Anniston has been here for three weeks I decided now would be a good time to record her entrance into the world.

Anniston was born on Tuesday March 18th at 8:42 in the morning. she weighed 6 lbs 3 ounces and was 17 inches long.

But before I get into the details of her arrival I first need to go back to the beginning of the story, well not the beginning but rather the middle at sixteen weeks when I found out I had placenta previa, a condition in which the placenta is low lying blocking the birth canal, and if it remained low the entire pregnancy then a c section would be necessary.

When we found out I had this condition I was told that it almost always corrects itself, almost being the key word. I met with a specialist every month to check to see if it had corrected itself and every month we found out it hadn't.

I had my last appointment in February where it was ultimately decided that my placenta was not going to move and we needed to schedule a c-section. To be extra cautious I had to go to the hospital twice a week to get non-stress tests to make sure I wasn't having contractions, because we couldn't take the risk of my body going into labor on it's own.

Each time I went to the doctor or the hospital for the NST I was always reminded that if I started bleeding I needed to get to the hospital immediately. Talk about putting fear in a girl. I spent a lot of time checking for blood always worried that I was going to start bleeding. My condition was only partial previa instead of a full previa but there was still a risk I would bleed.

On Tuesday morning the 18th when I woke I stayed in bed and just laid there going through everything I needed to do that day and the rest of the week in anticipation of my c section the next Tuesday the 25th.  I had thank you cards to finish, a nursery to put together, hair to get cut and colored and numerous other errands to complete. It was going to be a busy week. Luke's parents had spent the night at our house the night before and I was making a list mentally of everything they could help with in preparation of Anniston.

As I was lying there in bed I felt something that did not feel normal at all, I jumped out of bed pulled back the sheets and saw blood where I had just been. I looked down and realized I was bleeding, pretty badly.

Luke was in the bathroom getting ready for work and I yelled "Luke I'm bleeding, a lot", he very calmly said 'lets go now", I put on my flip flops and we got in his truck and took off for the hospital, so thankful that his parents were at our house to stay with Eli.

I had so many different emotions going through me on the way to the hospital, first I was full of fear, my doctors and nurses had been very serious about how quickly I needed to get to the hospital if I saw any blood at all, and here I was bleeding a lot, I had lots of "what if's" going through my head.

I was also completely annoyed with myself. Here I was 37 weeks and I didn't have a nursery even remotely put together, no new clothes washed for the baby, I hadn't packed a hospital bag and I had a huge list of to-do's that needed to be completed before she came. Why did I procrstinate and not get those things done sooner?

But through all of that I felt peace.When we got in the truck Luke prayed over me and the situation and we knew God was in control, it was scary but I also felt peace.

After we got to the hospital it was a whirlwind. We were rushed up to the labor and delivery wing where I was happy to see a couple of familiar nurse faces (because of all my (very very expensive) NST's I had done).

I immediately got in a room and they got to work prepping me for my c-section. I had one person on one side reading me paperwork so I could sign it, another putting in my IV and then the anesthesiologist on the other side explaining his process.

It was all moving quickly and I felt very safe in their hands. While I was being prepared for my c-section I still had my to do list running through my head, I looked down and realized I never gotten my much needed pedicure, and as I was being wheeled into the operating room I yelled at Luke to cancel our bible study that night. It seemed so crazy that we had all sort of plans for the day, yet instead of all of that we were about to meet our baby girl.

The c-section went by pretty quickly, after they gave me the numbing shot Luke was able to come back in the room and sit by my head, I then met the doctor on call who was very nice and calm and made me feel ok about everything.

He started the procedure and shortly after beginning he exclaimed that he could see a head of hair in there, and then Luke said "there she is!" and I heard our baby girl cry, and naturally I cried also.

It was 7:15 when I woke up that morning, 7:49 when we got to the hospital and 8:42 when Anniston was born. I never in a million years would have guessed that in less than two hours from the time I woke up I would hear my baby girl's scream. It was crazy and amazing and surreal and miraculous.

I caught a glimpse of my baby girl as she was getting cleaned up and they were doing all that newborn baby stuff to her. I was so worried about her weight being three weeks early but she looked (and sounded) healthy and strong.

Luke kept going back and forth between me and Annie and eventually went with Annie to the nursery. She was having trouble with her temp so they took her to the warmers.

I got all stitched up and then I was wheeled to my room. I don't remember a lot about that morning after my operation. I was so tired which I think was a combination of the meds and also just the craziness of the morning. But I do remember when I was being wheeled to my room hearing a voice say "MOMMY!!"

They wheeled me past the waiting room where Eli was with Luke's parents and he was able to see me. In the moment I wasn't sure if it was Eli or some other random kid (I was slightly out of it) but Luke later confirmed it was Eli.

We had called my parents on the way to the hospital and they immediately left to come to the hospital, and my grandparents came also. Annie wasn't able to come to my room until around one but the hours before that passed quickly with our family in the room visiting and going over the whirlwind morning and me in and out of sleep.

Anniston was finally brought to my room and I got to hold her for the very first time. It was one of the best feelings of my life. The day began with panic and fear and several hours later all was ok and I was holding my sweet healthy Anniston Grace. It was amazing.

Eli really didn't have much interest in seeing Annie, he was much more concerned about watching a show on the phone. He was also a little scared of me when I was in the bed hooked up to machines, I'm sure it was weird for him. 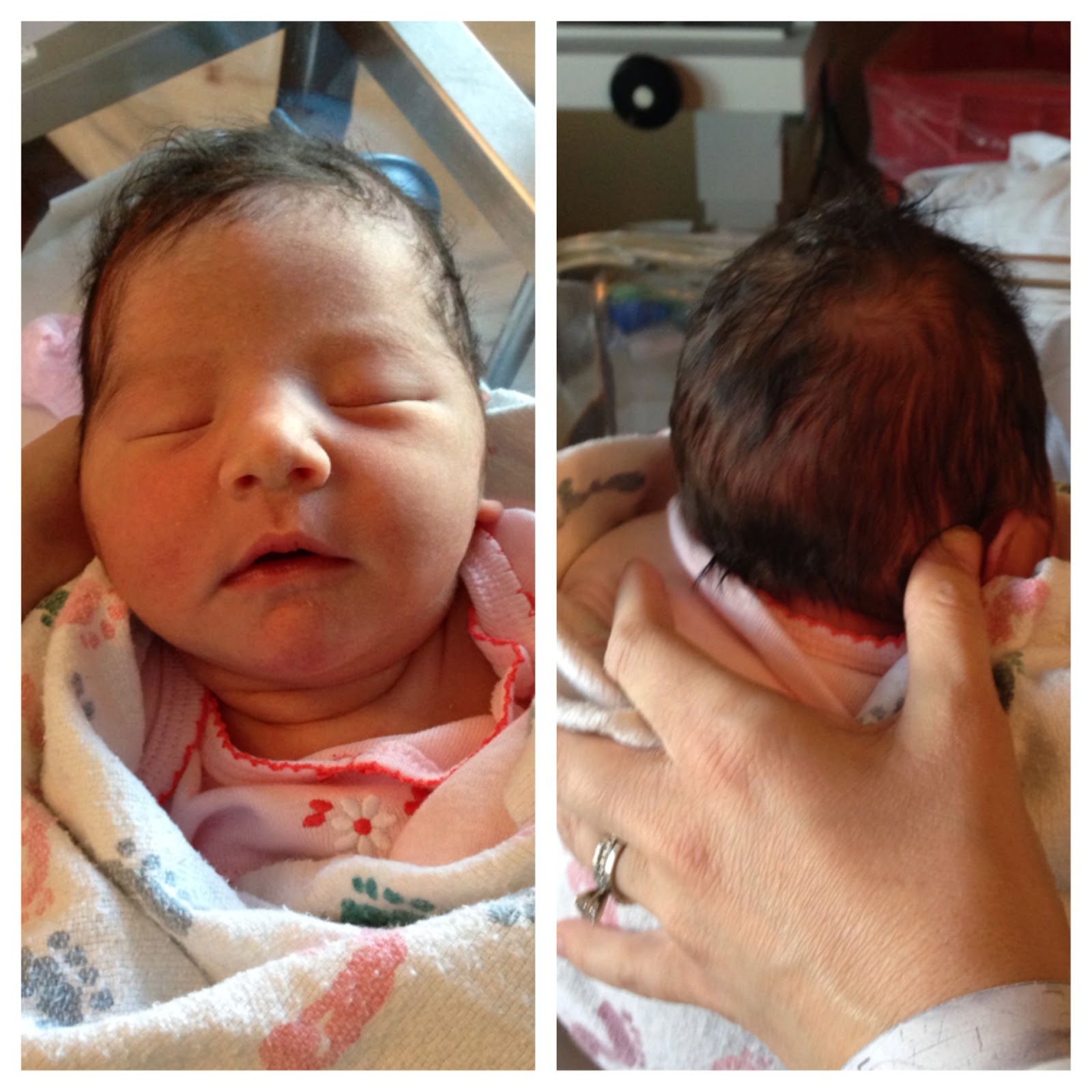 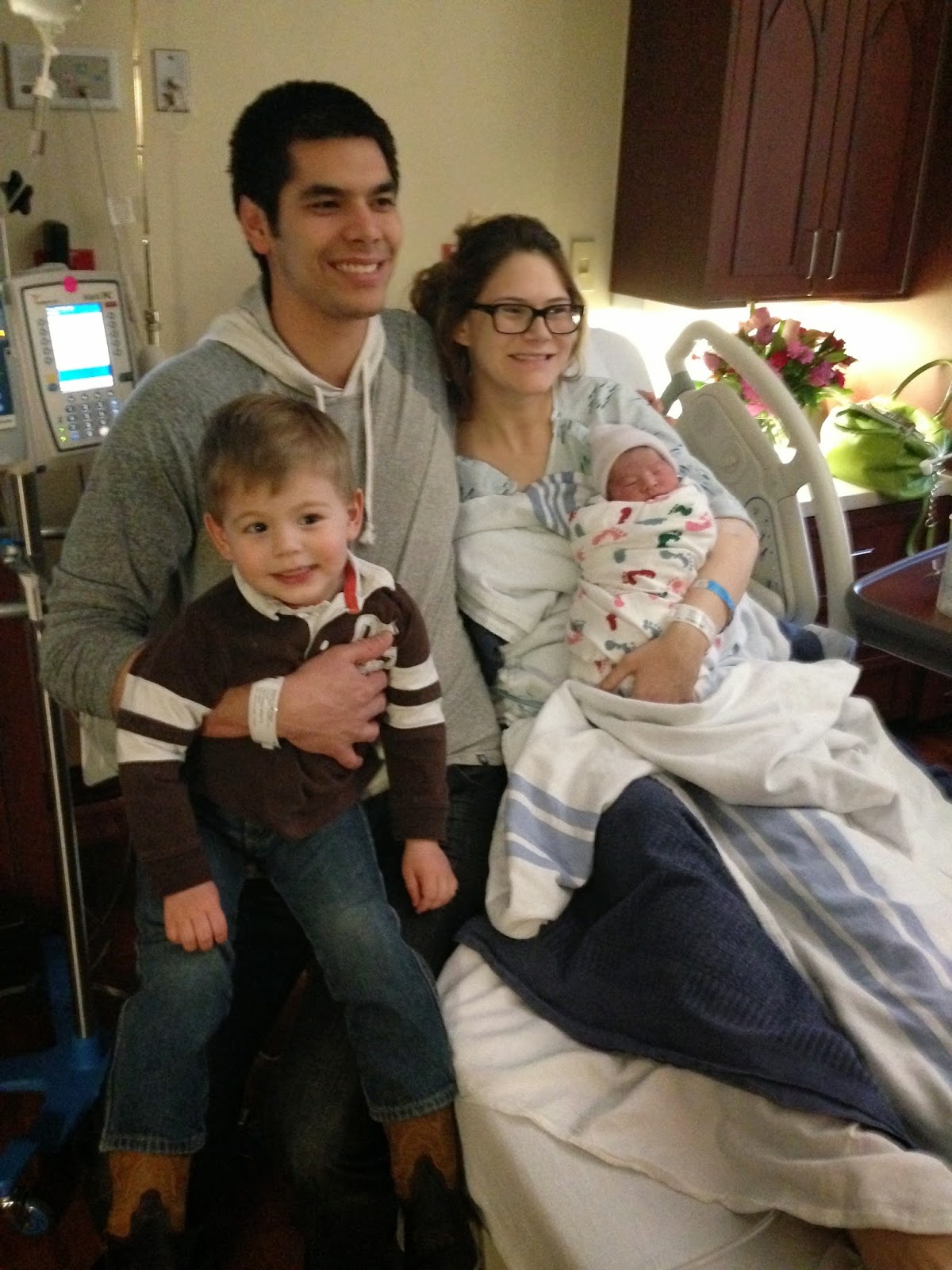 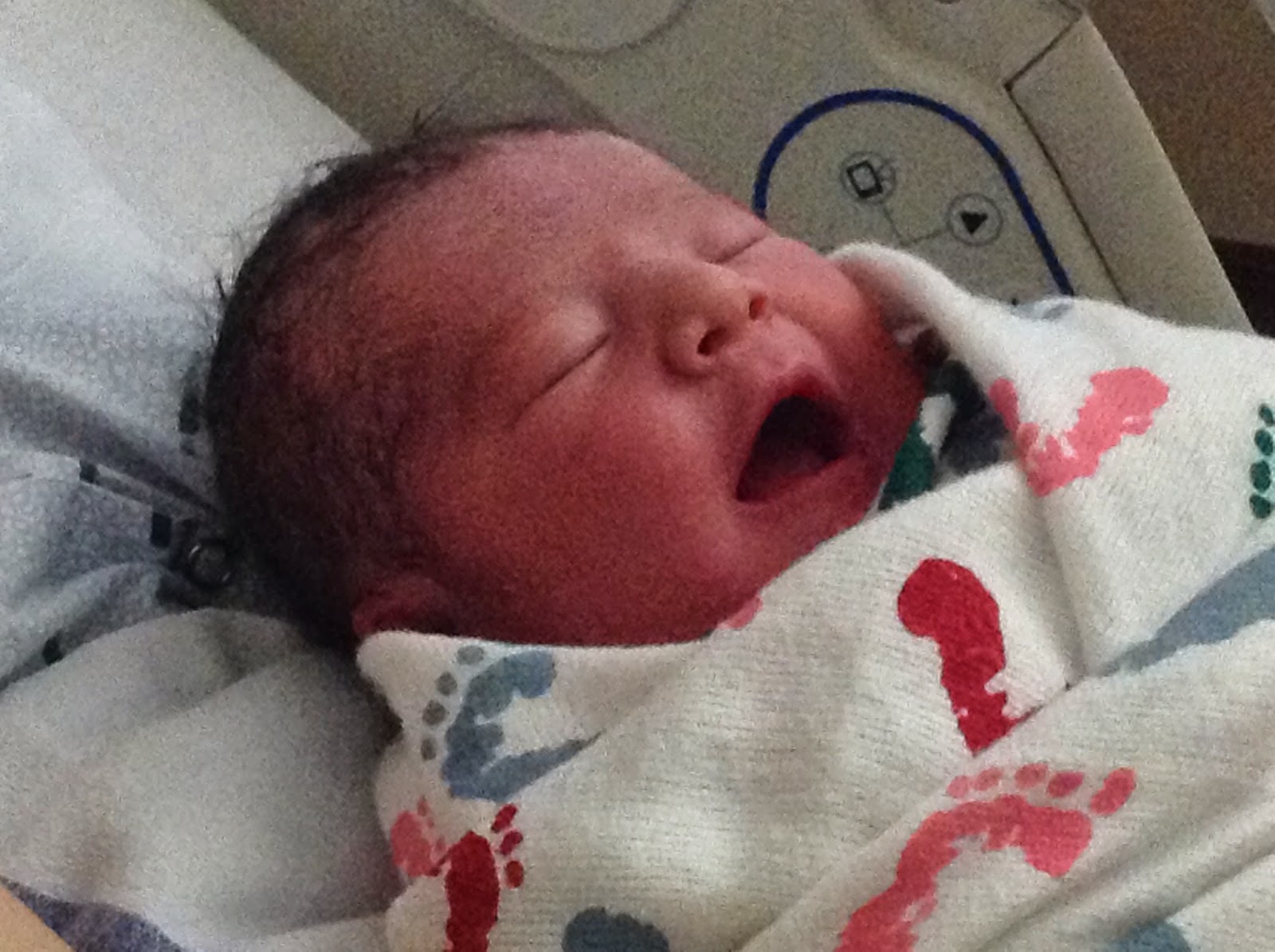 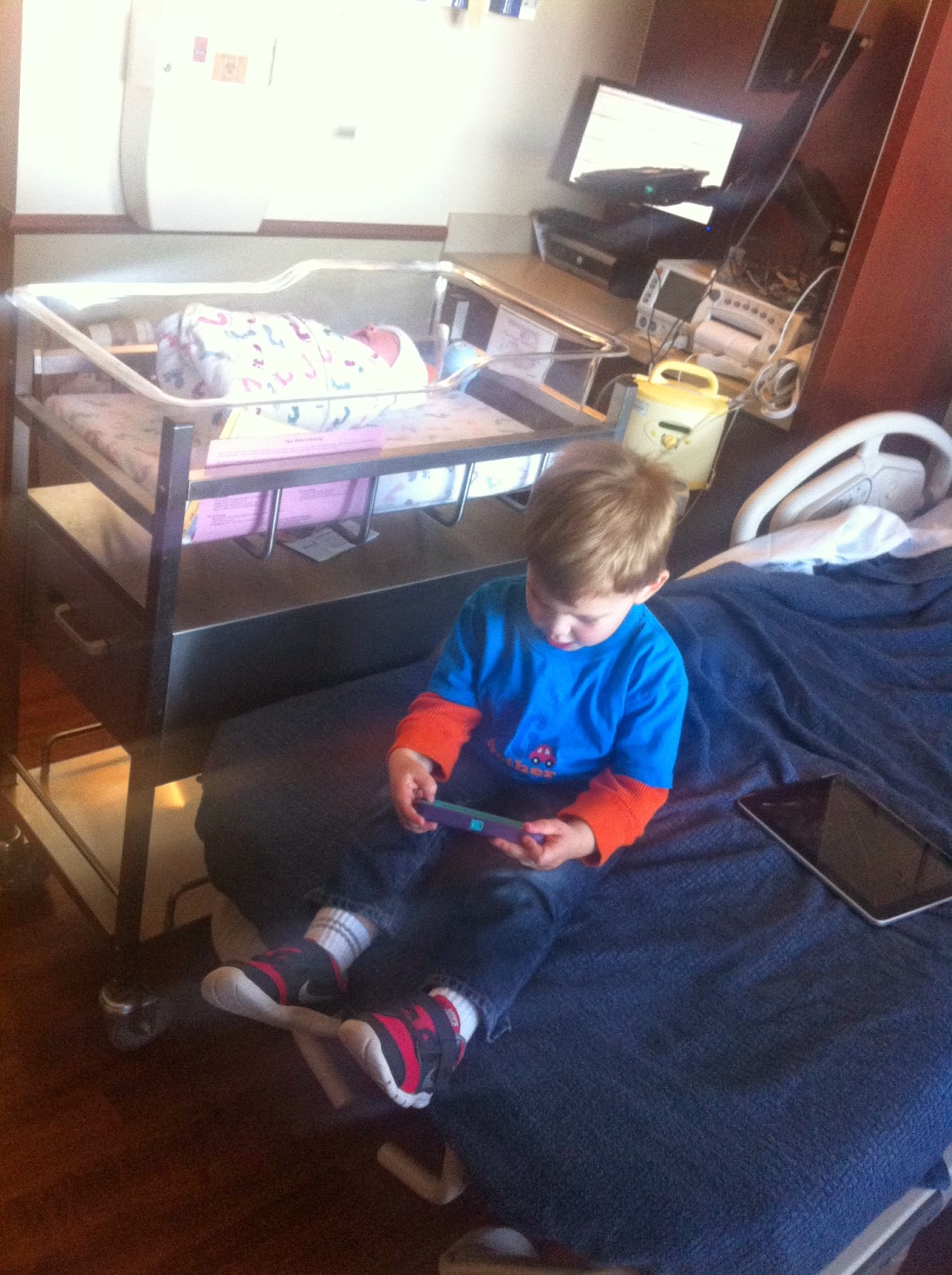 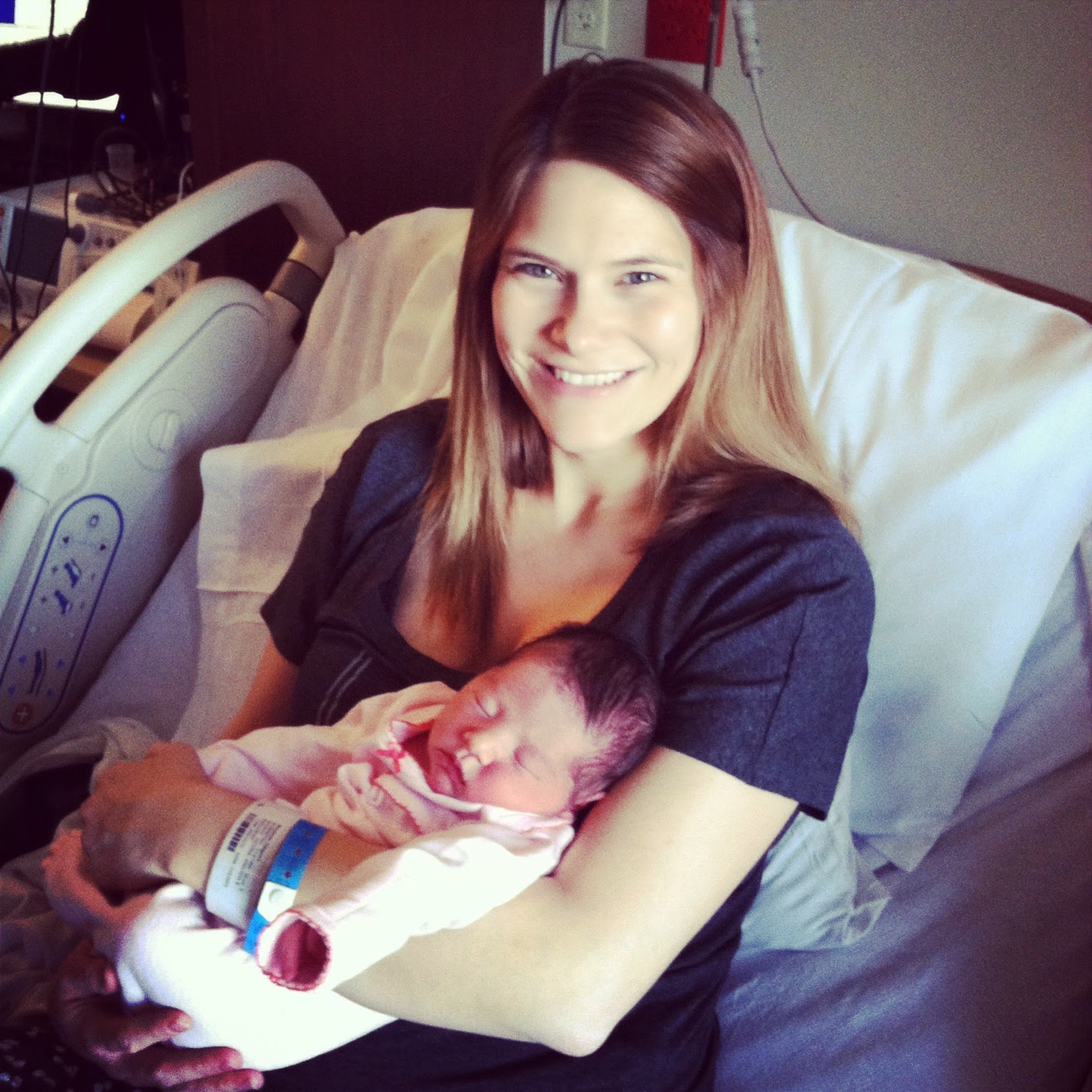 Luke and I stayed in the hospital before two days and enjoyed time with our second newborn baby. I loved my hospital stay as much as I did the first time around. Although it was much ore painful this time (due to my c-section).

We have been adjusting to our new life as a family of four these past three weeks and so far it has been a smooth adjustment so far. I'm so thankful for Annie's safe arrival and for all our doctors and nurses, they did an amazing job.