The Train Ride that Never Ends

During the holiday season I like to fully submerge myself in all things Christmas.

If I'm watching a movie it needs to be a Christmas movie.  Christmas music is the only thing you will hear in my car from the end of Thanksgiving till the day after Christmas. And if I'm going to Starbucks I only want a peppermint mocha. Yes I am aware they serve them all year long but they just taste so much more magical during Christmas.It's ALL thing Crhstiams ALL December.

Then once Christmas is over I'm done with it all. I don't want to see a Christmas movie or hear a song and I won't touch a peppermint mocha. Its all a mental thing, but I just don't like that stuff come December 26th. I even try and take my tree down as soon as possible. It was fun while it lasted but by the day after Christmas I'm ready to move on.

Well rewind back to the beginning of December. When the holiday season rolled around  I couldn't wait to introduce Eli to several Christmas movies that I thought he would enjoy. It was the first week of the month and I turned on Netflix and decided to show him Polar Express. I had never seen it myself but I've read the book and being that it is about a train I figured he would enjoy it. 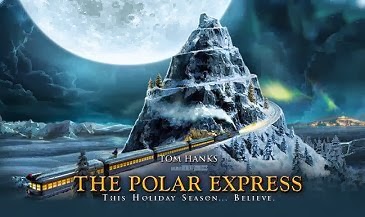 If only I could turn back time. If only. I never would have introduced that movie. I would have moved on with life

Since that fateful day that Eli first viewed Polar Express we have watched that movie countless times. I'm thinking it has to be somewhere around 100 times that the movie has tortured me. Forget Curious George and Super Why and all his past loves. Polar Express is the only thing he ever asks for. ALL THE TIME.

I even made the mistake of putting the soundtrack on my phone. It was in a moment of mom desperation when Eli was crying to watch Polar Express in the car and instead of putting up with the crying knowing it would pass I got desperate and downloaded the soundtrack to my phone.

I know every single word to that soundtrack.

Let's not forget the fact that I do not like Christmas after Christmas. I would even venture to say that it gives me the heebie jeebies.  So the fact that I partake in listening to Polar Express multiple times a day is the complete picture of a selfless mom. I am dying inside a little bit each time I sing Christmas songs in the car, all in the name of Eli's love of Polar Express.

And each time Eli watches the movie it's an experience. He isn't just sitting there staring at the TV, he's up acting out each scene, or signing along with each song (his favorite is the Hot Chocolate song) or he's yelling at the boy to get on the train.

If you aren't familiar with Polar Express (you lucky dog) there is a scene where the boy almost doesn't get on the train to the North Pole and every single time Eli watches it it's almost too much for his little heart to handle. I caught his reaction once:


Although I truly am sick of the movie and the songs I could listen to Eli sing the songs all day long. Have you ever heard a two year old belt out a Josh Groban song? It's a strange mix of pure sweetness and a little bit of creepiness. Eli knows every word to Believe and sings it with passion.

I do hope we move on from this phase soon - I miss the man in the yellow hat and George and all his crazy antics, however I know I will probably miss watching Eli dance to Hot Chocolate once the phase is over.  Perhaps I could get him to watch it in moderation.

In the meantime Merry Christmas from the Tree household. Apparently it's Christmas here all year long.