When I was working Monday was not my most favorite day. Now that I'm staying at home with Eli Monday has become a day I look forward to.

I wouldn't go as far to say that it's my favorite day of the week, but I enjoy our Mondays. It's a good day to get ready for the week, get the house cleaned up from the weekend and prepared for the week.

Today was no exception, Eli and I spent the morning in our PJ's while he played and entertained me with singing Jingle Bells approximately 500 times. It's such a sweet sound, and I try not to get annoyed with the 400th round of it and remember that one day I will wish for that sweet voice to sing to me, which makes me sound like a crazy mom. What's new?

I got Eli down for an early nap because later in the day we were going to the university where I worked (and graduated from) so Eli could join a group of other kids to film a scene for a holiday video.

As any mom of a toddler boy might understand I was a tad nervous about Eli's video debut. Sitting still for 2 seconds isn't exactly a common thing for him, and his "scene" called for him to sit on the floor and listen to a book - which I'm sure he does at school, but as we all know everything changes once mama is around.

However I am proud to say he did well for the most part. It helped that there were older kids there for him to watch, and that there was a reward of a cookie at the end of good behavior. There was only one incident of him rolling around on the floor while all the other kids sat cross cross applesauce like perfect little children.

Eli looked so cute for his onscreen debut. When I put him in this button up shirt he said "oh my shirt looks like dad's shirt, I look so awesome". Clearly Luke wears a lot of button up shirts. 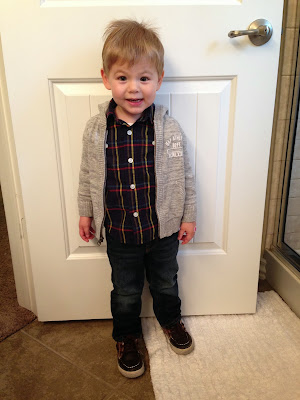 After dinner, because Eli and I were already dressed for the day I decided to take advantage of no PJ's and head to the mall to visit Santa. Plus after waiting in line over an hour last year Luke and I vowed to go during the week to avoid the Santa crazies.

We wanted to move quick because we didn't want to be gone all night and wanted to get home in time for a decent bed time, so we loaded up in Luke's truck and headed towards the mall.

Luke dropped me and Eli off at the door, because if I have to walk very far in anything less than 50 degrees I get grumpy. I got Eli out of his car seat and went in the mall to wait on Luke. This was when I realized that Eli was wearing one shoe. Not two. ONE. 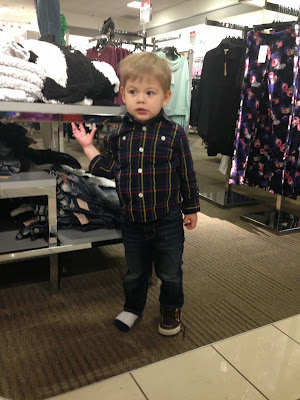 This was just another reminder that motherhood is a humbling experience. How did I forget to make sure my child had on TWO SHOES? Seems like a pretty simple task.

Luke got in the mall and we both laughed a lot at the fact that our child had on one shoe. Then we went and bought the first pair of shoes I found in his size.

THEN we headed to see Santa. I had told Eli earlier that we were going to see Santa and he said "nooooo I don't like that guy" so I was a tad nervous about how he might react when he saw the bearded fellow, but as soon as he saw him sitting there in his NON SANTA COSTUME his face lit up.

By the way, the whole non-santa costume thing is a whole other post which I'm sure I've blogged at some point, but I love this Santa so I stay loyal despite the fact that he's rockin a "workshop outfit" is that even a real thing?

I'm proud to say we waited in line about 5 minutes which was just enough time and much better than last year. And then we got a perfect picture, it was great! 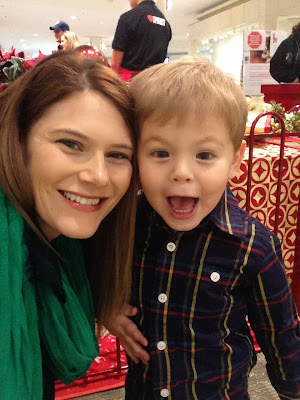 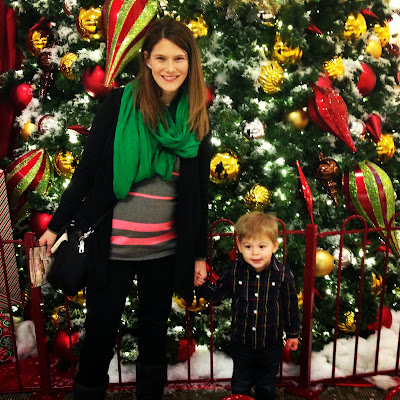 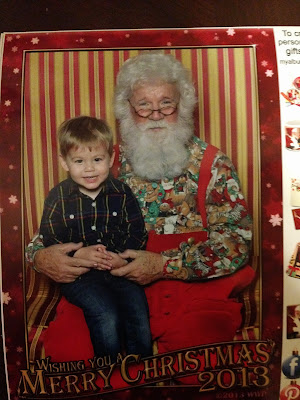 Visiting Santa is one of those Christmas traditions I look forward to every year. I have Eli's past Santa pics framed, it's so fun (and tear inducing) to watch him grow on Santa's lap through the years.