(linking up on Faith's blog today)


I have already talked about how far behind I am this Christmas season. And I think we can all agree that it's not my fault but the fact that Thanksgiving was a whole week later than  usual.

I mean, whose terrible idea was that?

Anyways, the other night I sat down to address all my Christmas cards and realized I was missing an entire stack of envelopes.

I thought at first that the printing company jipped me and didn't send me all the envelopes and then the more I thought about it I remembered taking them with me somewhere to address.

But I didn't know where I took them or what happened to them after that point.

Pregnancy brain is real and alive.

So now I have a huge stack of cards with no envelopes. And yes I could go buy more 5x7 envelopes but let's be honest, the chances of me doing that before Christmas are slim to none.

I've resorted to more economical means and have started handing out Christmas cards left and right. Chances are if you make contact with me in the next 24 hours I will just hand you a card. Acquaintance or not.

I was able to get some cards out before I lost the envelopes but a lot of people I sent cards to last year won't get one this year and for that apologize. I hope you can carry on with your year.

Now, after the longest intro into a Christmas Card EVER.....here is our 2013 Christmas card: 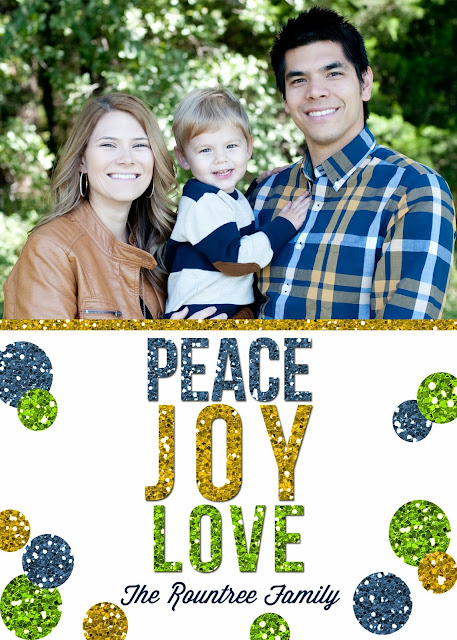 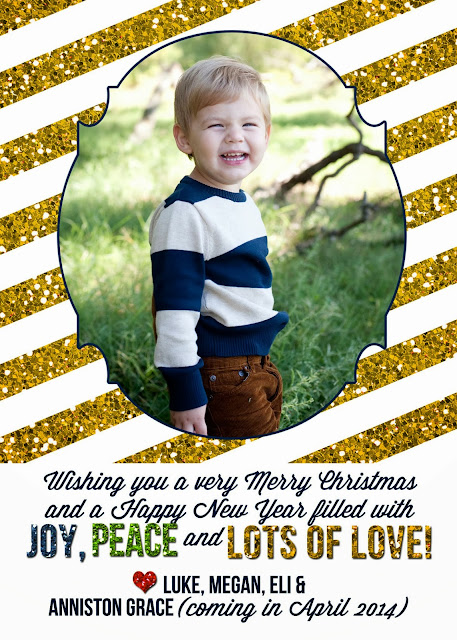 I love it SO much! It is probably my most favorite card ever, although I'm sure I say that every single year.

I knew I wasnted something with gold in it, and a bit of sparkly stuff is always fun. Sarah designed them for me and I know she says she isn't a mind reader but I'm pretty sure she is because she always captures exactly what I have in mind.

On a whim I decided to share baby girl's name on the card, and it wasn't until I had already ordered them that I really took a second to think about it and realized that putting it on the Chrsitmas card meant it was pretty much SET IN STONE (slightly joking there). So basically I knocked out two bird's with one stone. Naming my child and ordering Christmas cards. Priorities.

So there is our 2013 card in all it's glory. And if I see you in Target I will hand you a card. Merry Christmas!