We've had a fun weekend, well I guess just Friday and Saturday.

Friday Eli and I met up with Sarah and her kiddos and we went to a children's museum. I had never been to this museum before but I always wanted to go. I'm so glad we went, it was pretty small, which was actually great because we could sit and talk and still see the kiddos running around.

Eli and Manny have fun together, sometimes they fight (we are still working on sharing) but for the most part their playtime together runs smoothly. 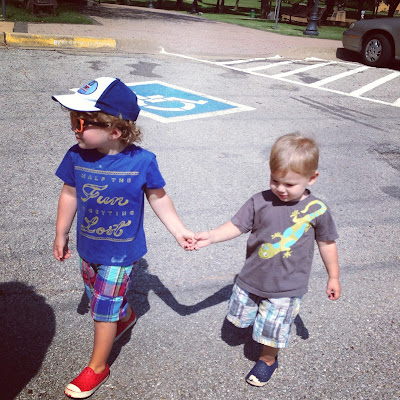 Earlier in the day on Friday when I was driving noticed that the fire-station was doing carseat checks. I decided to stop and get Eli's seat checked, partly because I wanted to get it checked and partly because I knew he would want to see the fire trucks at the station.

When I pulled into the fire station it was like a swat team of male car seat checkers flocked my car. (and yes I totally acted like I was texting while I took this pic, the key to a secret pic is to make sure your phone is on silent so they don't hear the "click", not that I've made that mistake before) 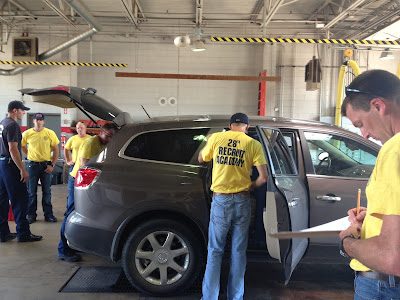 The firemen were so nice and answered all my questions and gave me some good tips. I was so glad I stopped by. 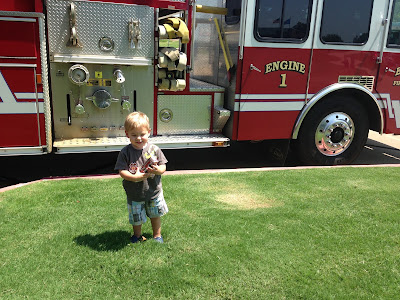 I love Friday nights when we don't have any plans and I feel like it's been awhile since we've had a Friday with no plans (it probably hasn't been long but it just feels that way). We had no plans Friday so we decided to eat out and hang at home. I was craving Greek food so we went to a local Greek Restaurant to get our food to take back home.

I had the best Gyro and homemade hummus EVER. I wish I had some right now. I will be going back there soon. SOON.

Saturday we went to Dunkin Donuts which is a BAD habit we've started. Luke and I started going there because we love their coffee and then one day we made the mistake of getting those little chocolate donut holes.

I didn't want to eat any because I've already had some this week so I told Luke to order 1 donut hole. One. He ordered one dozen. Perfect.

Then we went to the mall because it was tax free weekend and we decided it would be good to fight the masses for some $4 sunglasses.

When we met up with Sarah and Manny on Friday Manny was wearing orange sunglasses and Eli asked for orange sunglasses about 20 times after that. I really thought it was adorable because it has been the first thing he has actually asked for (besides chocolate donuts of course)

We are going to the beach soon so he needed sunglasses anyways. I went to Target and couldn't find any but knew I could probably find a pair at the mall. Cue us going to the mall only to realize it was tax free weekend and every pre-teen and I'd rather be anywhere but here parent was there. We didn't stay long.

Just long enough to make sure Eli got his cool sunglasses. 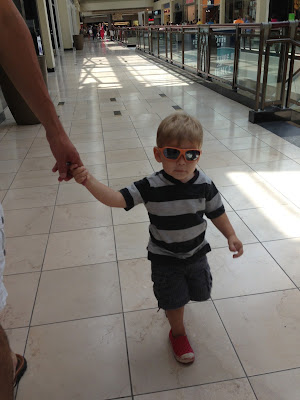 After the mall we met Sarah and her family and some of their friends for brunch to celebrate Sarah's husband's birthday. It was so fun and the kiddos did awesome, that's always a plus! 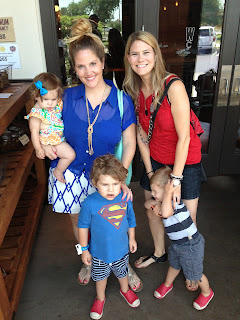 I know technically the weekend isn't over yet but we did so much on Friday and Saturday I wanted to go ahead and write about it.