I recently downloaded Spotify on my phone which means I now have the music world at my fingertips.

Although, it's a far stretch to say I have the music world at my fingertips because I only use about 2% of that music world - and it's all boy bands all the time on my spotify.

Do you know how long it's been since I've popped in a boy band album and jammed down like nobody was watching?

As I've been listening to my favorite boy band songs lately and forgetting that my windows are in fact see through and people could be watching me sing at the top of my lungs... I've had a lot of conflicting feelings rising up inside of me. One day they bubbled over and I shared with Luke my concern.

We were driving in the car, and I told him my inner conflict and how I always felt torn because I loved the Backstreet Boys songs the most, but I thought Justin was the hottest out of all the boy bands so I was so confused....did that make Backstreet Boys or 'Nsync my favorite band??

Luke told me that this wasn't the first time I had shared this "problem" with him (I honestly don't even remember telling him before) and he was embarrassed to be married to me.

Well that was a little harsh for something that I feel such STRONG CONVICTIONS about.

I can remember one day in my former life of a TRL watching, eating macaroni and cheese on the couch  after school teenager,  that it was official, I was going to be a Backstreet Boys fan. Done.

I enjoyed their songs the most, and really that's what boy bands are all about right? Their artistic talent?

And then Bye Bye Bye happened. The song, the dance, the music video. Everything about it was perfection. This scene stands out in my mind: 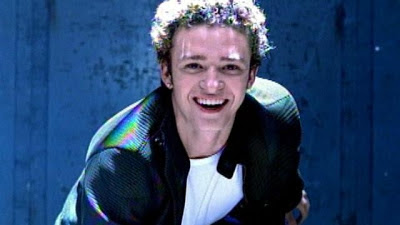 I mean, what is a 16 year old girl with a torn boy band heart supposed to do with that?

I converted to a full blown Nsync person. We're talking Nsync planner, Nsync posters, furiously recording any and ALL Nsycnc appearances on the TV.

But deep inside it didn't feel right. Yes JT had my heart with those curly blonde-dyed locks, but the Backstreet Boys ballads struck a deeper nerve.

Also, I see a theme in my life. I tend to obsess, OBSESS over trivial, meaningless things while more important things (ahem, grades, college applications ETC) are being put on the back burner. This could be a talent or a curse. Carry on.

Years went by, I went to college, got married, Nsync and BSB broke up and then JT straightened his hair. Everything was different.

It wasn't until this past month when I invested in Spotify that the conflicted feelings came flooding back.

And now, in my 29th year of life, I am confident in saying that BSB is my favorite boy band of all time. I have been continuously listening to their greatest hits and nothing compares. Have you listened to Drowning lately? Maybe the best boy band ballad of all time. I still sneak in a little Bye Bye Bye here and there but I can listen to the full album of BSB over and over.

I do realize at the age of 29 I have bigger issues to worry about, but some issues just need to be settled.

And I can officially say all the loose ends of my boy band dilemma have been tied up.

Now I can go on and worry about more pressing matters, like is One Tree Hill or Friday Night Lights the best show of all time?