Thursday, our fourth day in New York City was such a fun day for me.

Before I get into why it was so fun you have to know my "backstory". Well not my life backstory but the story behind my love of Good Morning America.

I love, love, love Good Morning America, or "GMA" as us loyals call it. I started watching it in college and something about it just attached itself to me. I watched it every morning while I was getting ready for work and continued to watch it every single morning until this past year when I had to sacrifice my TV time for my toddler who wants to watch his morning shows.

I'm just kidding my toddler doesn't watch TV, he's over in the kitchen writing music or building a architectural masterpiece with legos.

Anyways I LOVE Good Morning America. I stuck with them when everyone was a Today show fan and remained committed through all the anchor changes. It's my morning show.  It's possible I take TV a little too seriously.

So I knew without a doubt I would want to go to GMA when we were in NYC, the only problem was that you have to get up early.

And who the heck wants to get up early on vacation? Maybe an older generation of people, but not someone who has a child who gets up around 6:30. No thank you.

But for my beloved GMA I decided it was worth it. I just decided I wouldn't shower or do my hair. Which was a STUPID thing to decide to do when you could potentially be on TV.

That was a bit of foreshadowing.

Luke and I woke up early and headed over to the GMA studio. There wasn't a big crowd when we got there. It was fun watching the producers and interns and other people who seemed important run around outside and get things ready. It was so neat just to watch the behind the scenes action since I've watched it on the other side of the screen for so long. 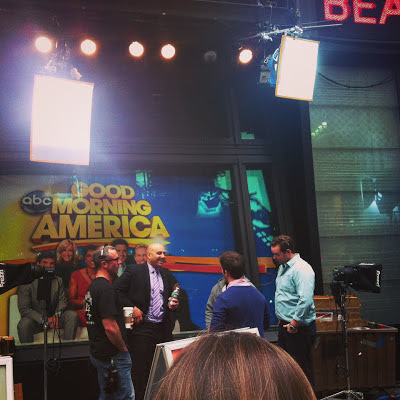 Once the show started filming they would have about 10 seconds where they would want us to yell and clap while the camera ran by us. My sister took this picture from home where she was watching us: 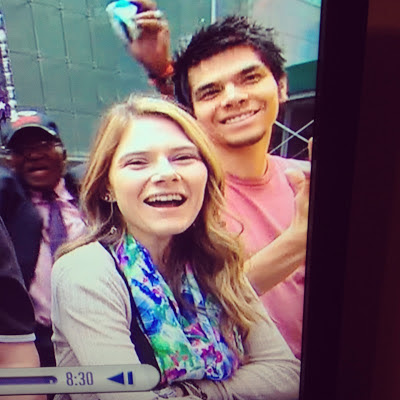 (don't judge the "yesterday" hair, I'm not a girl who can wash my hair every other day)

While we were standing outside this young intern came up to us and asked if we would want to go inside. Umm are you kidding me? THIS WAS MY DREAM COME TRUE (I have small dreams)

I was on cloud nine while inside. It seemed so much smaller inside and there were huge lights and cameras everywhere.  I spent my whole time looking around probably looking like a small town girl who never left the farm. 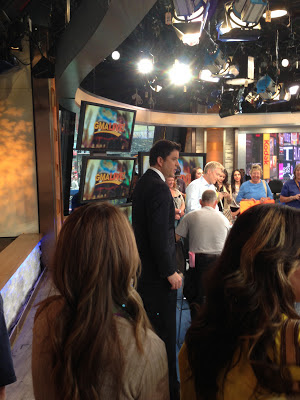 I have loved Josh Elliot since the first day he started, He's just so charming. (thats him there with the suit on) Luke took this pic of me watching Josh and kept telling me to ask Josh for a picture. He supports my anchorman crush.

It was so exciting to see Robin Roberts. She has always been my favorite anchor and I admire her so much.  She was incredibly sweet and talkative. 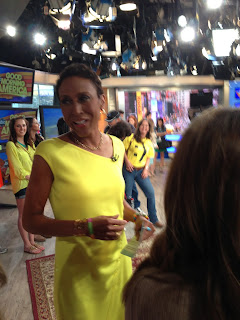 Jewel was the performer of the day so we got to stand behind her and watch her sing. I've never been a big Jewel fan but it was cool being there while she sang! However I did not support her outfit of choice. 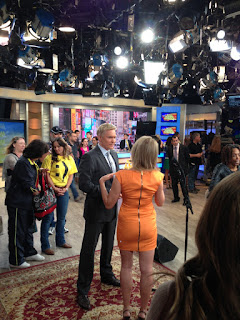 Here we are intently watching Jewel... 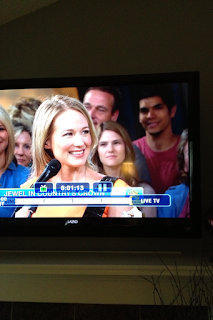 My parents recorded the show and I watched it when I got home and I was SO EMBARRASSED. While we were watching Jewel I didn't know where I was supposed to look? Was I supposed to stare at her back? It just felt weird. So I spent a lot of the time looking all around and then...it happens. I look at the girl next to me and it LOOKS LIKE I give her a once over look. You know like I was sizing her up?? I look like a totally insecure snob. I was embarrassed. Really I was trying to just do something with my eyes, but on camera I spend a good 15 seconds just STARING at the girl next to me.

After our Good Morning America moment in the spotlight we went and found some food and explored the city some more. 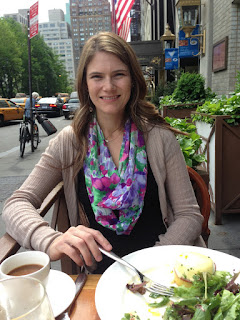 Later that night we went and stood in line at Wicked to try and get some front row tickets for only $30 but there were like 200 people in line and only 13 tickets. Needless to say we didn't win.

So we found the only Mexican food in Times Square, enjoyed some chips and queso and walked around some more (yes we walked a lot). 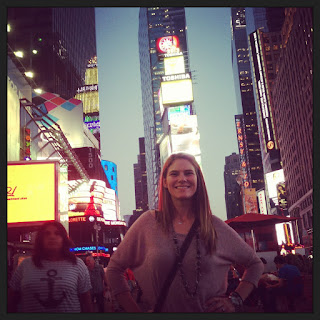 We decided to go back to the hotel and relax so we stopped at Magnolia Bakery (which was highly suggested) and got some cupcakes and headed back to the room. 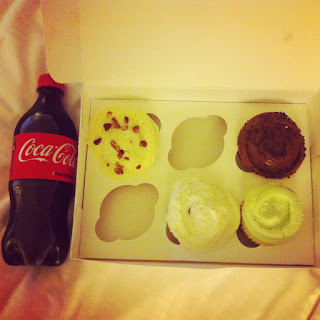 When we got back to the room we had a present waiting for us (like we did every night) to prepare us for the next day!! 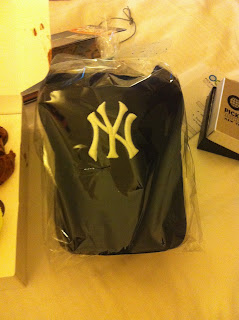