When Luke and I decided to move into a rent house after our house sold we were told that the rent house would be ready in a couple of days.

Thankfully my grandparents were kind enough to offer their cabin for our temporary stay for those few days while the rent house was being remodeled.

Well I'm not sure offer is the correct word to use because I called my grandparents and asked if we could use their cabin, knowing that they couldn't say no knowing that their great-grand baby boy would be homeless.

The problem is, we packed some bags, and got the bare necessities ready to live in the cabin for a couple of days.

THAT WAS THREE WEEKS AGO.

I'm not anxious or anything.

The problem is not the cabin, or the fact that we are living in the country about 30 miles away from our town where everything we do/use is located that's not the problem.

The problem is that we had our minds set on a couple of days so we never got settled. If we had known we would be here almost a month we would have bought groceries, and packed more than 8 sets of clothes, and mentally we would have made this home.

But instead we've been on the edge of our seat everyday thinking in the next couple of days we would be moving, only to find it got pushed back. Again.

And so we wait. Feeling unsettled, just waiting.

While we wait, I feel like we are turning into country, cabin people.

First of all, I go to Sonic every single day. I'm not proud of this and I'm afraid I'm going to have to buy all new pants once we move but it's the ONLY restaruant in town and its about two minutes away.

I go there every morning to get coffee and I have developed a love for their coffee I might even like it more than Starbucks. 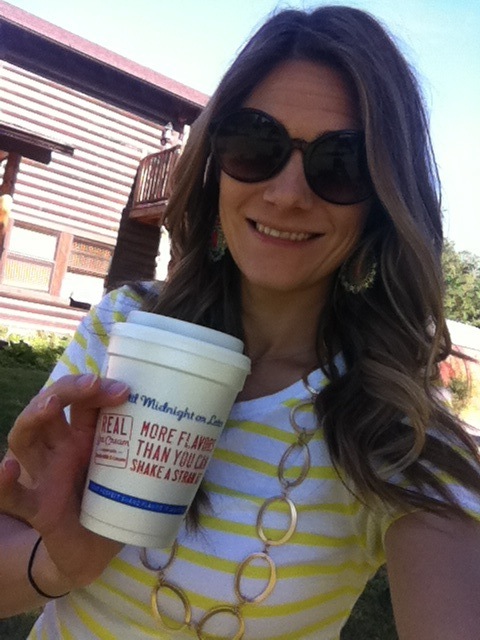 While all the trendy girls are posing with their starbucks this country girl has her Sonic!

I also go there every afternoon for happy hour. Hello vanilla Coke. You complete me.

Before we moved here Eli hated dogs. He was terrified of them and would run from them. Now? He considers dogs (wah-wahs) his very best friends. He knows all four dogs here by name and runs to see them everyday. 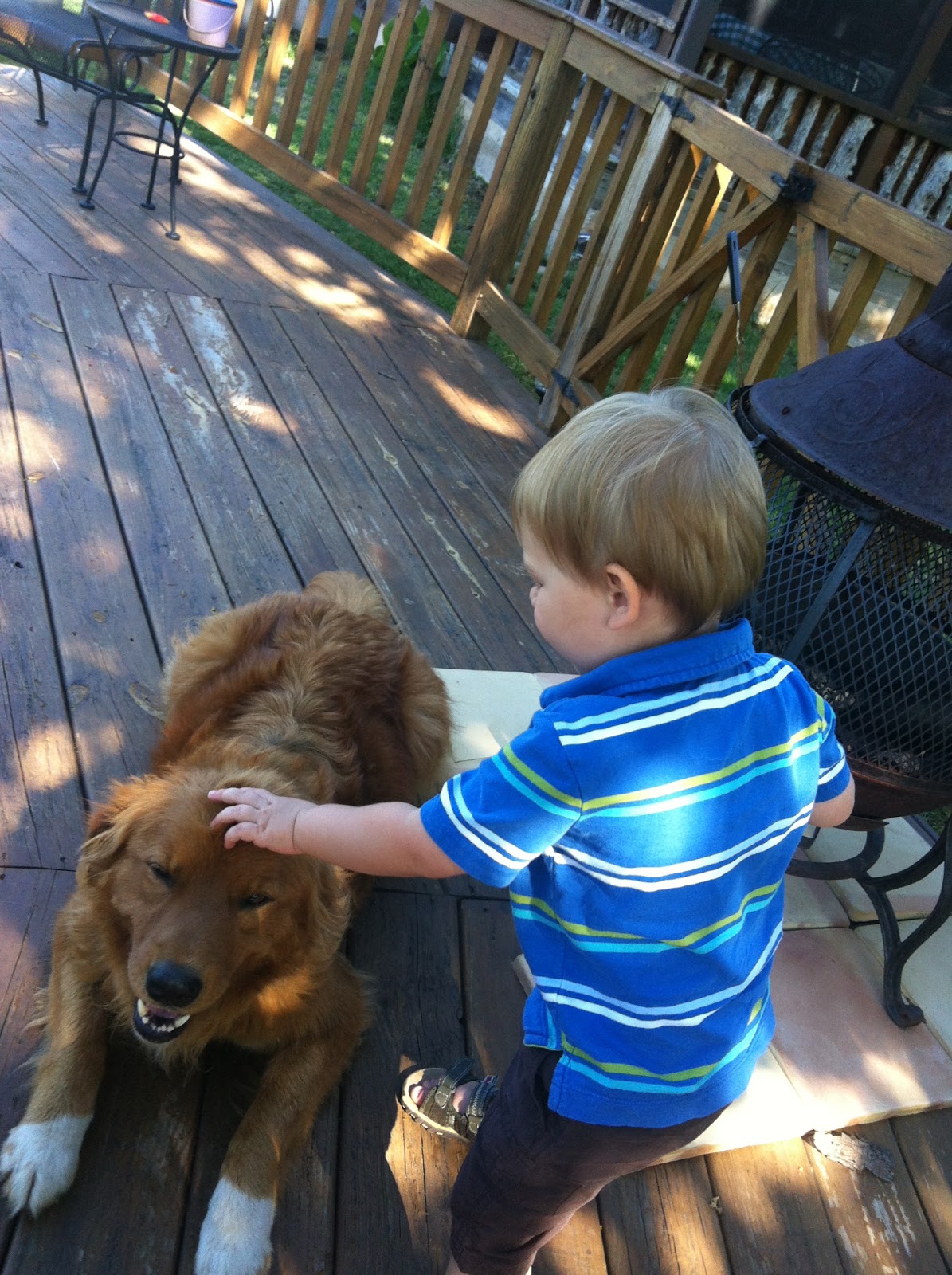 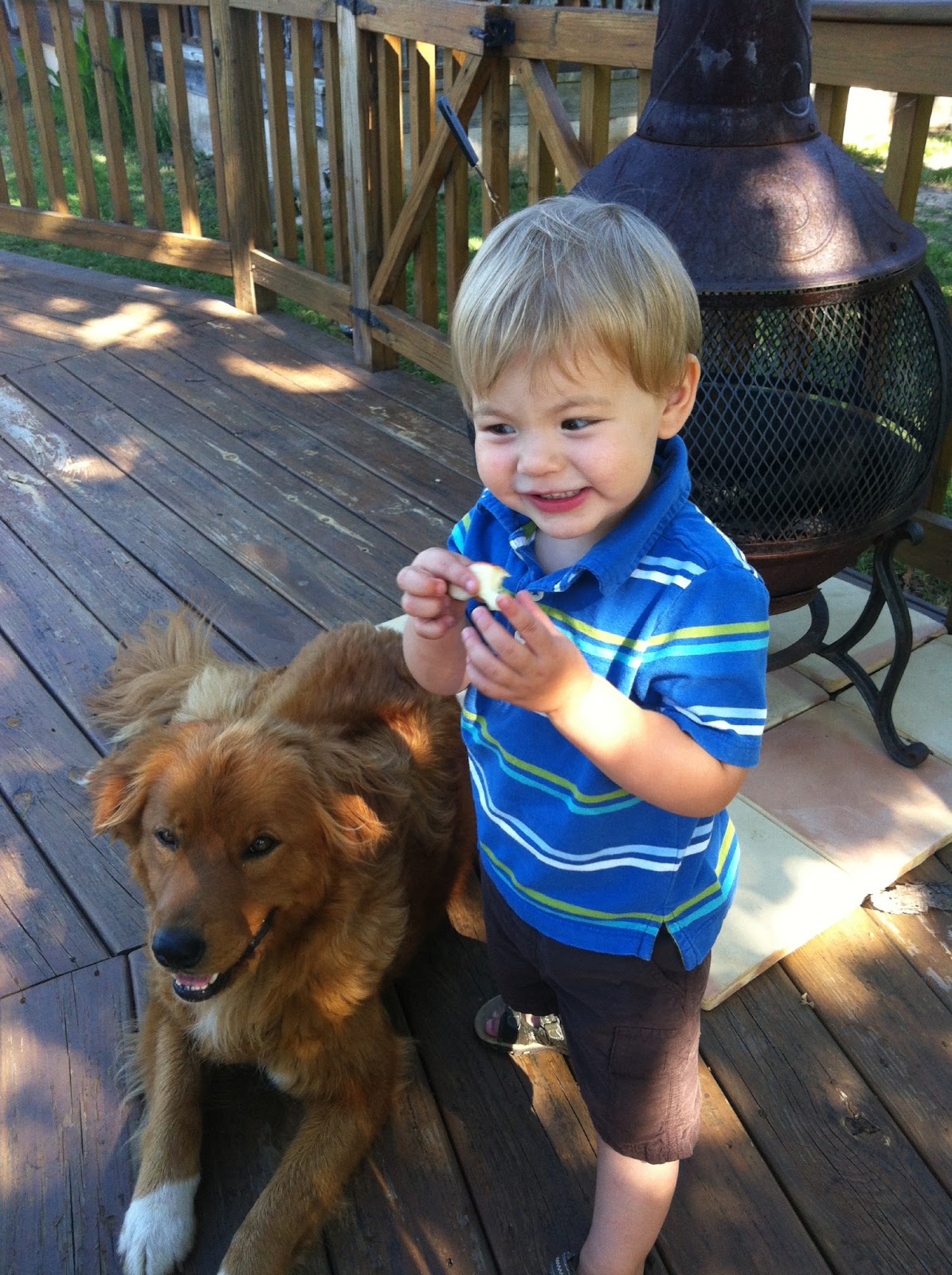 This dog is named Doug cause he looks like the dog on Up.

We spend a lot of time outside and rarely watch TV. I've been doing a lot of reading outside while Eli plays and I even take my computer outside and work. I have lots of mosquito bites but the fresh air is nice.

Other than the mouse visitor we had the first week we haven't had too many unwelcomed critters. There is a turtle that comes to our porch every so often, but he isn't unweclome, he is cute. And when we go outside Eli yells "turtle!!! where are youuuuuuu". And then he spends a good five minutes looking for the turtle while I try and corral him into the car.

This boy is going to be sad when we leave our country cabin.

I have seen several snakes on the road that leads up to our cabin, and every time I see one I have to stop and get a picture (they have all been dead, I would NEVER stop for a living snake).

I have NO idea why I want to get a pic, considering I HATE snakes. They are just HUGE so I feel like I need to document it.

This is the snake we saw tonight. I made Luke stop so I could get a pic and then he jokingly started to drive away and leave me with this snake. I screamed of course. 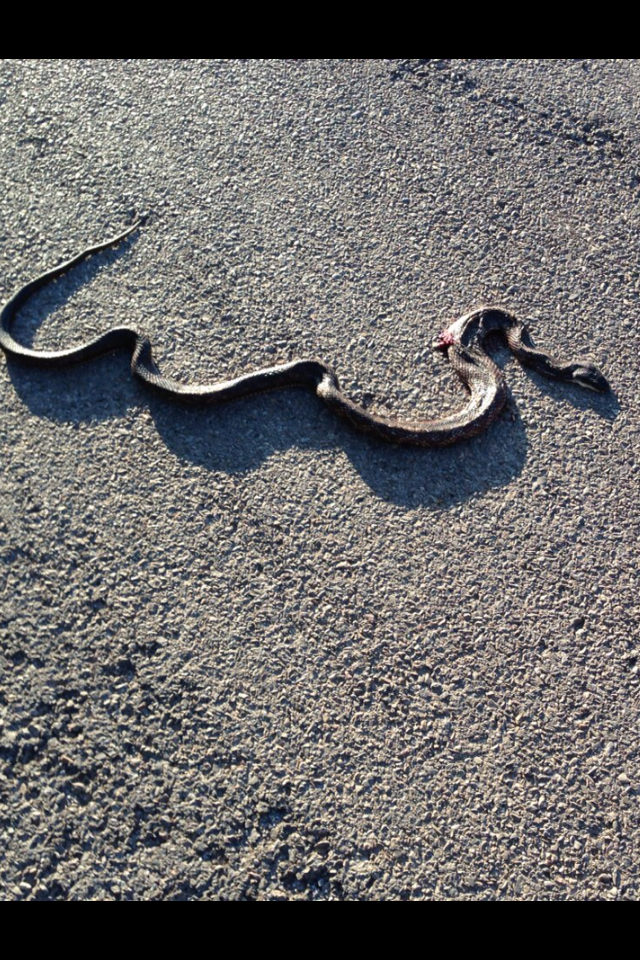 I also saw a HUGE snapping turtle yesterday, (think the size of a opossum) but by the time I turned my car around to get out and get a picture it had crawled into the grass and I couldn't see it.

It has definitely been a fun three weeks. I'm over not having cable and the slow internet has just become a way of life.

It has just been hard not feeling settled. I wish we would have known we were going to be here for three weeks and then we would have been mentally prepared.

But then again, what fun would that have been? Sometimes you just have to roll with the punches.

I'm actually going to be very sad when we leave our cabin. Until I watch new episodes of Real Housewives on my cable TV while drinking Starbucks coffee NEVER seeing a snake of any size. Then I will get over my sadness.