Well so far we have survived almost a full week in a cabin in the country with no cable and sketchy internet.

The internet has actually been working more often than not. Which is good because one night Eli was watching Curious George on the iPad and it kept pausing and starting trying to find an internet connection and he got mad and threw my iPad.

Clearly we take our TV seriously.

My iPad is now cracked in the corner. The first casualty of country living.

I've felt a bit like Laura Ingalls Wilder as I've tried to navigate my life living way out in the country.

There is no Starbucks nearby so I can now say that Sonic has VERY good coffee. I never would have tried it if it wasn't for it being the ONLY"restaurant" in town.

I'm sure Laura had that same problem in her pioneer days.

Speaking of pioneer days, I now know why they all died so young.

We spent about 85% of our time outside because basically it's the only thing to do. And I can tell you that if I don't get inside an air conditioned house with cable soon I could very well die of allergies.

I just solved all the problems of the pioneer world.

In other country news, we seem to have a little problem here in our cabin.

A little problem called a mouse.

We have tried numerous traps in numerous places and we can't catch the creature.

It's like we got the one mouse with street smarts who knows how to avoid every trap set before him.

So, being that we are out here in the country we have a wide assortment of animals to choose from to keep us company, so we invited several cats into our house to stay for the night to kill the mouse. 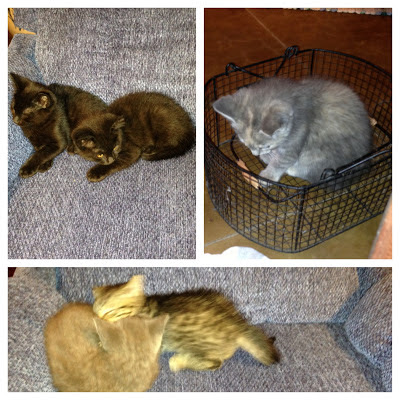 I mean, are we brilliant or what?

I looked over and saw this: 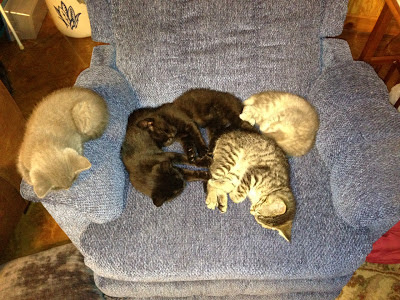 I felt that maybe they were resting up for their night of catching a mouse with street cred.

Time will only tell if it worked having 5 outdoor kittens run rampant in the cabin.

If you remember Eli was scared of animals prior to our {temporary) move to the country. Well he isn't exactly an animal loving boy now but he also isn't so scared.

He actually touched a cat today which is leaps and bounds in his animal hating world.

And he constantly wants to go see the "sheep" also known as goats: 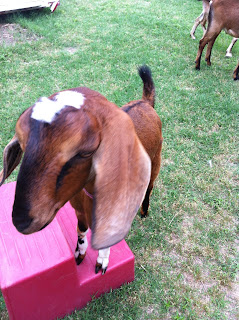 But then when they look at him he screams and runs.

And the wah-wahs also known as dogs don't bother him so much anymore. 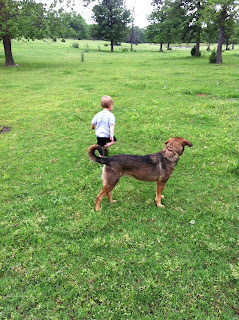 I'm not sure how long we will be staying out here in the country but until then I become a little more pioneer everyday.

Just give me some allergy meds and I'll be good. For a little bit at least.