We had a wonderful Easter weekend, it flew by but it was still great!

Friday we just stayed home and hung out. I had cooked a brisket in the oven all day which was a first for me. I've normally done it in the crock pot but I think I liked it better coming from the oven.

After dinner we went and got ice cream and then just came home and watched TV. I think Friday nights have become my favorite nights as a family. No need for Luke to go to bed early, no plans on the schedule, just hanging out together. So fun.

Saturday we ran some errands in the morning. It was a beautiful day and warm enough to wear shorts! I wish it would stay that way but it is supposed to get back down in the 40's this week. 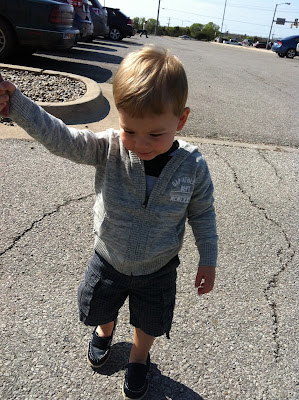 We went to Barnes and Noble to get Eli an Easter book, and we happened to go at the same time there was a story time. Eli wanted to listen to the story but didn't want to sit on the bench with the big kids. I think he looks so precious here just peaking over. He is growing up so fast! 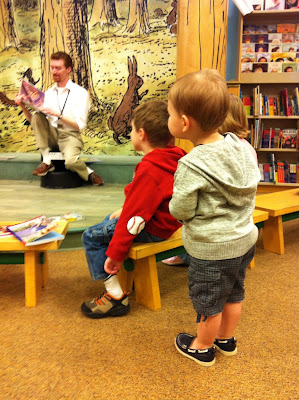 There was also a train table in the kids area so Eli was in heaven. We stayed here for about an hour looking at books and letting him play. 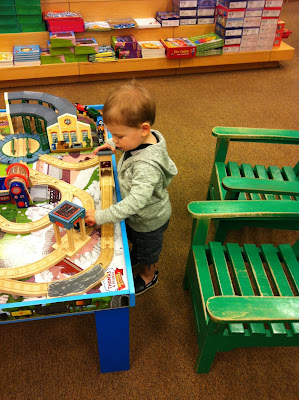 Eli had been asking for "pia" all day so that night we got some pizza. He loves it and eats about 2-3 pieces.

The next day was Easter, and aside from the meaning of the day, it was just like any other day for us.

Luke leaves very early in the morning so there was no Easter basket time with Eli, and we don't live near any family so we didn't have any family lunches or picnics to attend. Despite all of that it was still a great day.

I knew it would be near impossible to try and get a family picture that morning. I was working in kids church (where I had 23 four year olds, God Bless my weary soul) and I knew it would be chaotic after church. 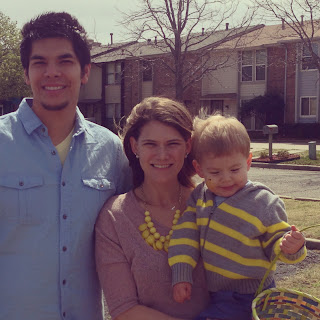 And because of the craziness of trying to get outside after church we ended up missing the Easter egg hunt. Which wasn't a big deal cause Eli didn't know what he had missed, and he had already done one egg hunt last week with my family.

He actually walked around and picked up all the broken plastic eggs and had fun doing that. 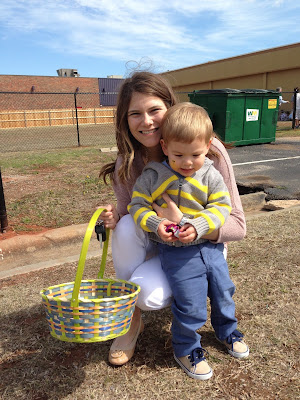 After church we ate our leftover pia (awesome Easter meal) and then went to a park to swing and feed the ducks.

That night after giving Eli his bath and putting on his PJ's we realized we had forgotten to give him his Easter basket. so we did that at the dinner table. 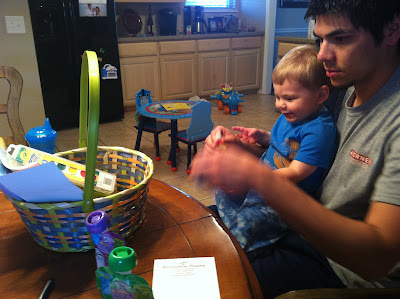 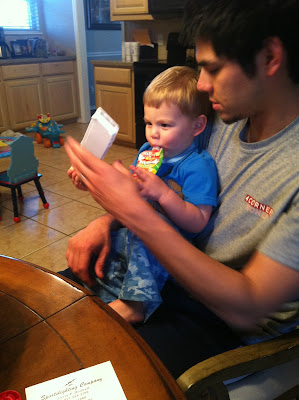 It was a great, low-key weekend.

but the angel said, "don't be alarmed. You are looking for Jesus of Nazareth, who was crucified. He isn't' here! He is risen from the dead! Look, this is where they laid his body
Mark 16:6