Friday morning I went and did something that I haven't done in over a year.

Drum roll......I got my hair colored. ( I can hear the hallelujah chorus now). I never intended to go this long without getting my hair colored but we were working on not spending much money and my hair coloring got put on the back-burner.

I don't even really know what that saying means, but my hair coloring was on the last back-burner there ever was.

It wasn't until my baby sister was so kind to audibly gasp when she "realized" that I was 29 and my other sister pointed out that I had numerous gray hairs that I decided it was time for hair coloring to be released from the back-burner and be brought to the FRONT- BURNER.

And so I got blonde put back in my hair. Woo hoo! 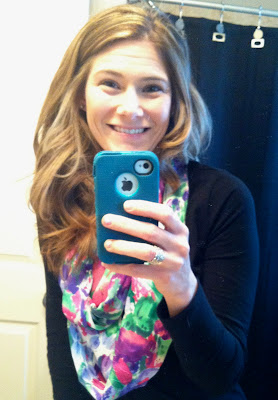 And now that concludes the vain part of my post....let's carry on.

My nephew spent the weekend with us and Eli LOOOVED having his favorite playmate here with him.

We did lots of fun things like a picnic in the park. Which sounded all fine and dandy and "we are the funnest parents EVER" until we got there and realized it is impossible for children to sit and eat when things like SLIDES and SWINGS and {nasty dirty} DUCKS are in sight. 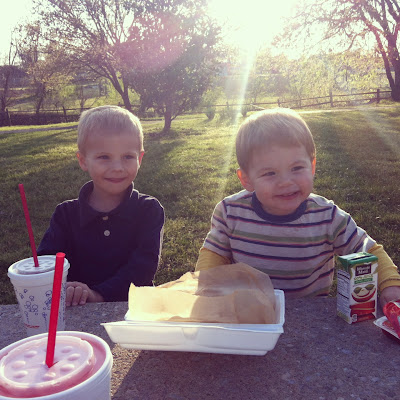 So Luke and I ate while the kiddos played.

Side note - why do kids not have to eat? It's like they can go for days living off of a morsel of bread crust and I feel like I'm starving if I haven't eaten in the past hour. AND Why do I end up eating most of Eli's meals?

I still can't figure out why I've gained weight recently.

After Luke and I finished eating four meals we ventured out to chase and/or look at the ducks. Well we didn't chase ducks but we chased the children who were chasing ducks.

I'm pretty sure it is frowned upon to actually chase the ducks. And I can only imagine how entertaining it is to watch a mom chase her toddler who is chasing ducks while yelling "ducka ducka ducka ducka ducka"

By the way, that's what Eli thinks ducks say. We have told him countless times that ducks say "quack" but he prefers that they day ducka. So when you say what does a duck say? He will say DUCKA DUCKA DUCKA.

This also applies when he chases the ducks. I'm sure the scared ducks are wondering why this kid is screaming ducka ducka ducka at them. 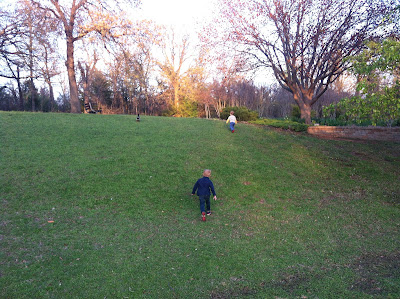 I wanted to send a picture of me with the boys to my sister and mom, and this was the best I could get.

I like to pretend pictures like this are all natural and show us just having fun amongst the grass and tulips but really I had to corral the boys for like 8 minutes prior to this and then Eli was bucking like a bronco the entire time trying to get out of my lap. 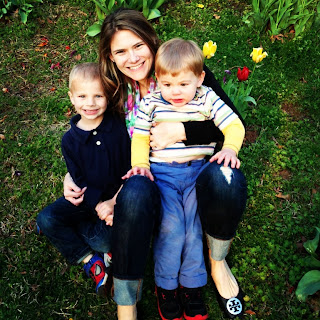 Now this is a natural picture..... 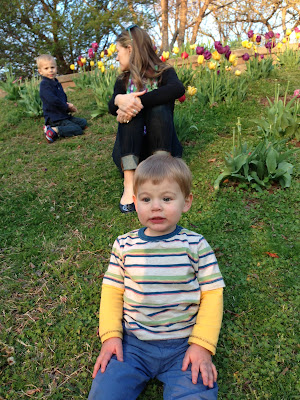 Saturday we had a full day of pizza with friends, lots of time at the park, a trip to Sonic and a tired mama trying to get two boys to nap, even going to extreme measures of using the iPad as "rest" time only to fail.

On a separate but related note I'm currently searching for the best cream to get rid of bags under my eyes. All suggestions welcome.