Artwork on a Couch

When Luke and I were first married I was so excited to do all the typical "married people" things together.

Like grocery shop. Furniture shop. Watch TV together. Ya know all the fun stuff.

Clearly I had high standards for our marriage.

During our engagement when I was crazy and maybe a little bit mean bride planning her wedding, Luke and I ventured to pick out some new furniture for our apartment.

I was just giddy about FINALLY getting to do married people things. Furniture shopping with my soon to be husband was the icing on my finally-getting-married-after-waiting-eighteen-years-for-my-boyfriend-to-propose cake.

We headed to the furniture store and came to three realizations.

1. We have very different taste when it came to furniture
2. We were poor
3. Neither one of us was good at avoiding and/or getting rid of those sales people who follow you around.

These were three things that could have broke us but we decided to push through and make the best of it.

We continued to walk around the furniture store with our new best friend, a middle aged woman named Cathy, who was bound and determined to help an engaged couple get their life started through moderately priced furniture. (or make a sale, whatever).

She led us to a couch and sofa set that she insisted was perfect for us. I looked at the couch and sofa and imagined Luke and I watching TV together on that furniture in our newlywed bliss. I imagined Luke sitting on the couch eating dinner that his beautiful bride had meticulously put together for him. There were a lot of unrealistic not-yet-married dreams happening in that few moments.

And now, for the past five years I have continuously regretted that moment when I pictured what I thought we would look like instead of actually taking the time to CHECK OUT THE FURNITURE WE WERE ABOUT TO BUY.

I'm not even sure we sat on it? Or touched it? We just bought it.

We were young and dumb.

We were finally going to pull the plug and get a new couch and sofa and then we had Eli. And not only was there less money around but we realized that babies are messy, and we would rather have that mess on old couches than a brand new beautiful (and comfortable) couch.

For the most part I had come to peace with my couches and didn't feel sick every time I looked at them.

And then tonight I walked into the living room to sit on the couch, looked at my couch and gasped.

I gasped so loud and shrieked that Luke came running, thinking something was wrong.

My couches were (are) now the home of the artwork of a certain two year old. A man in this house who shall go unnamed left a black ink pen on the couch and a toddler who will go unnamed got to work with that pen.

Just earlier today at church I had a conversation with a friend asking if I really needed to keep every piece of artwork that Eli ever scribble scrabbles.

I mean the picture of Moses from kid's church is cute and all but it was TWO lines of crayon. One purple and one green. I really don't think I need to keep that tucked away so we can pull it out 10 years from now and marvel at how Eli drew a line.

Eli was nearby when I said this, and I'm now convinced he was hurt and decided to put his artwork on a permanent place. LIKE MY COUCH.

I have been told that rubbing alcohol can get out ink. Or at least lessen the blow.

I will be drinking the other kind of alcohol as I try and get rid of the ink. 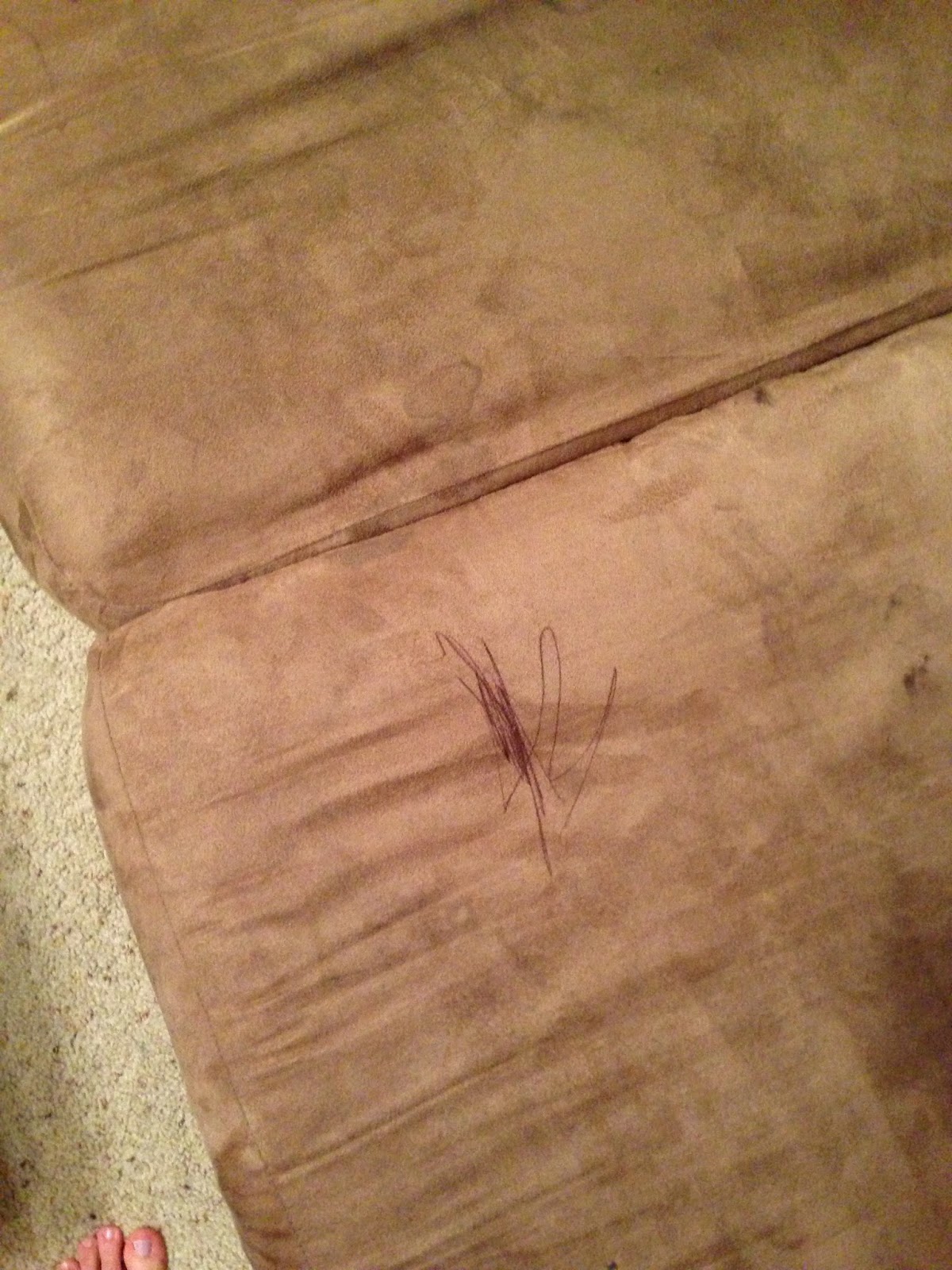