The Key to Nowhere

There is a myth going around that the good Lord above gave every person a special talent of some sort.

Some can sing, or at least they think they can sing, we've seen enough episodes of American Idol to know that not everybody who thinks they can sing can actually sing. Some people can dance, and I'm not talking about that air humping stuff, I'm talking beautiful symbolic dancing. Others can paint or draw, and they use that gift wonderfully in their life.

Well it took me 28 years and one adult art class to come to the realization that I have no gifts. Zero.

I've always suspected that I was gift-less but people in my life who seem to be more "half cup full" kinda people assured me I did......they can assure me no more. The truth is out.

What led to this epiphany? Well tonight a group of friends from our church met at one of those paint your own canvas places. They seem to be popping up everywhere and like all the fro-yo and cupcake stores that are opening up everywhere I feel like people are asking two questions..1. Why didn't I think of this? and 2. How long will this fad last?

So anyways we arrived at the paint room and everybody seemed to be nervous about their painting, while I remained the cool, calm, positive minded person - which is rare for me. I declared that all our paintings would look great, that they walk us through what to do every step of the way. Just relax I said with such ignorant ease.

This is yet another example of how I take control and make statements that aren't necessarily true but they sound authoritative and true so people believe me. I blame this weird trait on being the oldest child.

However my statement could not have been further from the truth, and sadly I was the example of how not every person who walks through those doors and pays enough money that could have bought  a decent set of groceries can attempt to paint a picture that they easily could have bought at Hobby Lobby on their 50% off day.

The picture we were painting was already traced out for us on our canvas, which seems simple enough. I mean we work on staying in the lines in Kindergarten right? How hard can this be?

Very. Put a couple of paint brushes in my hands and I lose all sense of control. I couldn't get my hands to move the right way. The teacher would say to paint a soft stroke and my stroke would look like I had stroke while painting the line.

While others were stressing about straight lines, or correct shading I just wanted to be done. Clearly painting was not my thing.

The instructor came over to help me at one point and used the words "Holy Mary what did you do?" then he had me get up so he could fix it. I'm pretty sure that a paint your own canvas class means YOU PAINT YOUR OWN CANVAS but mine was so bad he needed to intervene.

It wasn't a total awful moment because I used the time to snack on chips and queso which can make pretty much any situation better. Even the sudden realization that you have been lied to your whole life and you have absolutely no talents.

Before the painting began. I was so young and youthful with the whole painting world ahead of me, I had no idea what was in store: 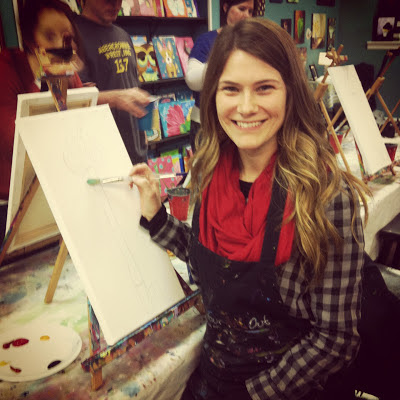 After I was done painting my wonky key. 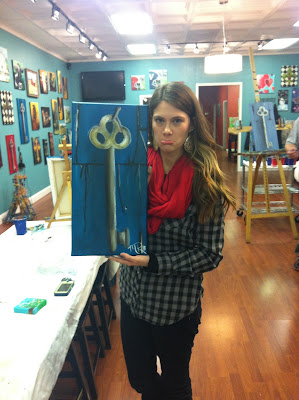 Anybody want to buy a wonky key?
Posted by Megan at Monday, February 11, 2013