If you read this blog a few weeks ago you will remember that I signed Eli up for gymnastics. He hated the first session but I had an optimistic outlook that the future classes would go better.

Better can be a relative term.

Just last night I told Luke I was dreading going to gymnastics. And with that sentence I felt like I was a middle school student who was being forced to train day and night because her parent's wanted her to be an Olympic star.

But that's not the case, I'm just a mom who thought it would be fun to put her child in a 1 1/2 to 2 year old gymnastics class that meets for 45 minutes once a week. At this point I think I would rather be the overworked middle schooler trying to make it to the Olympics. Toddler gymnastics just ain't working for me.

Being a person that wants to make the most out of every single cent there is no way I would miss a gymnastics session, we will be there rain, shine or 200 tantrums, I paid the money so I must face the time.

This morning I tried to muster up my best most excited chipper voice and asked Eli if he was ready for gymnastics to which he replied "NO!"

We got in the car and as we made our way to gymnastics Eli started excitedly shouting "nacts" ("gymnastics" in toddler terms) and play!!!! So it sound like this:

This was music to my ears and I knew it was a Valentine's miracle from above. Or maybe it was just God granting the prayers of our teacher/coach who probably wishes she would never see us again, or that Eli would fall in love with gymnastics.

Most of the class went about as well as a class of five toddlers can go. Eli was actually enjoying the session and was actually listening to his coach and doing what she said! I was in shock but doing everything I could not to rock the boat. Don't look directly at it, don't talk directly to it, just let it be.

Then we hit the trampoline area where the kids take turns jumping on the trampoline. The coach always shows the kids all these fancy tricks to do and then they get on there and just jump their little hearts away sans fancy tricks, while us moms stand at the side and say, "Open legs, close legs, now kick" and the kids still continue just to do whatever the heck they want.

Somebody should really film this.

It was Eli's time to move away from the trampoline and this is where he lost it. He wanted to stay on the trampoline and he expressed that in the best way he knew possible; a full blown tantrum. As I was pulling him away from the area I looked out the window to the viewing area and noticed a very handsome Indian man watching us, it was my husband, praise the Lord.

Can I just saw at that moment I was secretly thrilled he got to see Eli meting down in action. Sometimes I think..... wait...... I KNOW he thinks I exaggerate Eli's fits. This was like the best vindication of my life.

I tried to steer Eli to the next area so that Luke could see him in action, but Eli also saw Luke at that moment and went crazy.

Have I mentioned Eli is completely obsessed with his dad? Like I could leave and I'm pretty sure he wouldn't notice. As long as his dada is with him he is perfectly content.

I'm the one who grew him in my body from a tiny fertilized egg into a full grown human being, while dealing with bouts of nausea and heartburn so bad I thought I was going to reach into my chest and rip my heart out, while Luke sat on the couch glancing at me telling me he had really bad heartburn one time in high school so he could totally relate.

Luke came into the gym and completed the remainder of the gymnastics session with us, which was a lot fun and I'm so glad he got to see it.

After our session ended we went to lunch where I asked Luke what he thought. He told me he was a little worried because the boy next to Eli was much taller and stronger and seemed to have more athletic abilities than Eli and would totally be first draft in the NFL while Eli was overlooked.

Because two year olds running around like chickens with their heads cut off is clearly the same as the NFL DRAFT.

We had a fun Valentine's lunch and I was able to be the photographer for these two best friends. 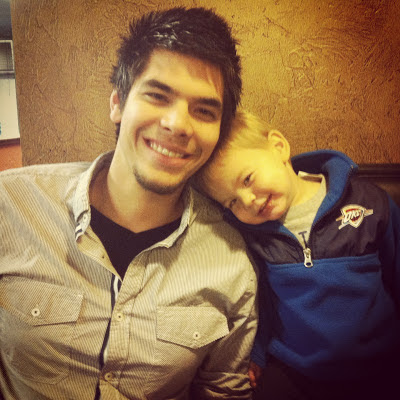