A Funfetti Link Up

One of my favorite things to do at night once I'm in bed but can't seem to fall asleep is lose myself through the mindless game of pinning everything I can on Pinterest.

Oh, and yes I have trouble falling asleep after chasing Eli all day, I've never been a person who needs much sleep.

In college my friend and I would sit in the hallway till the wee, WEE hours of the morning talking about anything and anyone, and then I would get up about an hour and a half later for my English class.

I was about to say that I have no idea what I learned in that English class....but actually I do remember one thing. We had to give speeches and there was an older man in the class who was getting his degree late in life (which is so awesome, kudos to him). Well he gave a speech about his life as a former truck driver that scared THE LIVING DAYLIGHTS out of me. I will never look at truck drivers the same.

His point was to help us know where their blind spots are and blah, blah, blah but it was terrifying. And might explain why when I see a semi truck on the highway I speed up past it like I'm in some sort of Toyota Rocket Ship.

And I for sure remember what my friend and I talked about because we would always talk about this boy who I had a crush on and I swore up and down in all my college freshman innocence that I truly deeply LOVED him. Yes I used the word loved. No I hadn't ever really talked to him.

No his name was not Luke and yes I later realized that I wasn't really in love with him. I can still hear my friend shouting at me in that college dorm hallway at 4am "THERE IS NO WAY YOU REALLY LOVE HIM". While I maintained my declaration of love.

All of that was a long way to explain that I like to look at Pinterest on my phone late at night when I'm just chillin.

Yes I'm long winded and yes I'm 28 and just used the word chillin. I try and stay young. Blame it on lack of sleep.

So several times throughout the week I stay up late and pin, pin, pin. I pin cute outfit ideas, I pin some workout ideas, I want to pin ideas for the next baby nursery but I do not want people to assume I'm pregnant (I'm not) so I don't. I pin organizing tips and cleaning tips, which sadly has not changed any of my organizing or cleaning abilities.

But mainly I pin recipe ideas. Pasta recipes, mexican recipes, crockpot recipes, dessert recipes. You name it, if it's food I pin it!

Well my friend Sarah hosts a monthly "Proof is in the Pin" post which basically encourages you to actually DO the things you PIN.

She's that encouraging type of person. Which comes in handy when I need a pep me up. She gets lots of emo texts from me. I've heard she's changing her phone number soon....

Anyways, (man I keep getting off track tonight) I decided to participate in her monthly challenge this month because I actually did some of the things I pinned.

And by that I mean I did one thing I pinned and it was a recipe that required 3 ingredients and no cooking....obviously if it's a challenge I will accept.

I made this delicious Funfetti Dip  that I found here: Eat Yourself Skinny 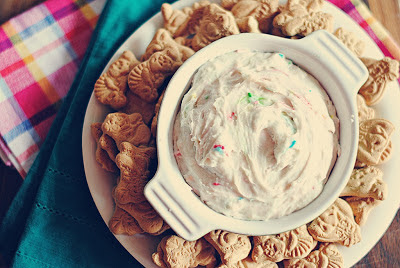 (picture taken off the blog above, it is not mine but I'm an awful photographer and this picture is great.)

I'm basically a fan of anything with the words "fun" and "fetti" in them so this was a total no brainer for me.

It was really easy and super yummy. We snacked on it with some animal crackers which boasts on it's container that you can eat 13 for only 100 calories so I felt like it was a pretty harmless snack.

Luke tried eating the dip with an apple and made the worst face ever and said they were not good together, just FYI.

The recipe calls for plain yogurt but I might try vanilla next time just to see.....

Well sadly that's my only pin! I was planning on sharing more than one pin but I just went back through all my pins and I have not done anything else.

Funfetti Dip and nothing else - that kinda explain my talentless life (see yesterday's post of my painting of a key that Luke asked me today if I thought we could sell it on ebay because there is no place for it in the house....)

He also told me next time I get the urge to paint to let him know and he will go to the store and buy me the supplies for less than what I paid for last night.

And then I emo texted Sarah for a pep me up talk. She loved my key.