A Bachelorette and a Pirate

A couple of weeks ago I had an idea that I thought was monumental.

I decided I wanted to start a blog strictly for "fashion" and replicate outfits I see on pinterest using only items I found in my closet.

It made sense to me.....I am not a fashionable person so I like to look at magazines and now pinterest for outfit ideas and I get inspired seeing what other people wear so I thought I would start a blog to show this.

I shared my idea with Sarah thinking she would marvel at my creativeness and ask to be apart of this grand venture, but instead I was met with the exact opposite.

When I told her my plans she said "Ha, thats already been done, sorry".

Except it was never really a dream as much as it was just a spontaneous idea, but for blog purposes: DREAMS CRUSHED.

That was when she introduced me to the blog "Pinterest told me to". Which is adorable and WAY more creative and funnier than I ever could have been, so it's a good thing that got taken off my plate.

If you have not checked out this blog click over there right now, it is just so fun! And rather brilliant if I do say so myself.

So anyways, where was I going with this?

Oh yeah, I love to use Pinterest for outfit ideas. (I think I've said that like 5 times now), but it wasn't until recently that I've given my outfits more thought.

Sure in the past I liked to get dressed, and I wanted to look cute, but when I was getting dressed everyday it was just like blah blah.

But now that I put on something other than yoga pants just one or two times a week it has become fun to come up with an outfit. And sometimes I get carried away.

If we are getting out of the house even to the most mundane places like lets say... McDonald's I get dressed like I'm some celebrity who needs to look their best because the photogs might get a picture of me while sipping my McCafe Latte.

I have a problem of finding a happy median. I'm a go big or go home kinda girl. I'm either in sweat pants and a hat or a prom dress at Target.

After I was introduced to the Pinterest told me to blog I saw a picture on there from The Bachelor that I knew I wanted to recreate, something about it just appealed to me: 1. WHY do the girls act like this guy is buying them all this stuff WHEN WE ALL KNOW it's really ABC
2. WHY is every rose ceremony THE MOST DRAMATIC ROSE CEREMONY EVER
3. HOW long does every girl spend working out just for those pivotal hot tub scenes? Please go eat a donut and stop crying already.

"I KNOW I totally thought they were truly, madly deeply in love also"

Even though it is a bold lie. Yeah I lie at bible study, so what? It's about The Bachelor, it doesn't count.

This has become the longest post ever to simply say I recreated the outfit above using only items found in my closet and this is how it turned out: 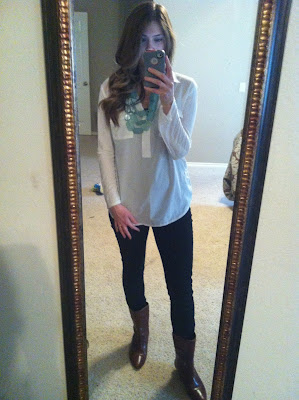 I love my short boots but I don't wear them a whole lot because I feel like Jake from Jake and the Neverland Pirates when I wear them. 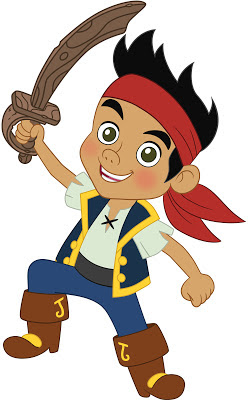 Clearly the resemblance is uncanny.

Do you ever recreate outfits you've seen on Pinterest? You should it's fun!

As long as you don't end up looking like a cartoon pirate.
Posted by Megan at Thursday, February 28, 2013