A couple of weeks ago Eli and I were in the grocery store and they had one of those giant inflatable Santas all blown up and waving around.

As we walked by it Eli exclaimed "SANTAAAA" which took me by COMPLETE surprise. Luke and I have never talked about Santa to him, not by any purposeful reason but Santa doesn't really come up in conversation January-November.

I had no idea how he even knew who Santa was, and Luke didn't believe me that he really said it. So that night we went through about 20 minutes of showing Eli pictures of Santa and saying hey Eli who is this? And he would scream SANTA. It was pure vindication for me. I didn't just imagine that Eli had said Santa and I was able to prove it to Luke!

Well over the days Eli would not only say Santa but he started saying "ho, ho". Yes Santa typically says "ho, ho, ho" but Eli leaves off the 3rd Ho. It is very frustrating for an OCD person such as myself but no matter how many times I worked with Eli on it he still only gives me two ho's.

The fact that Eli knew who Santa was made this season that much more fun. He loves our Santa figurines around the house and his picture with Santa from last year so I've been talking it up, in anticipation of our 2012 Great Santa Visit.

Which occurred today. It was going to be awesome. I would say "You get to sit on Santa's lap today!!" to which Eli would say "HO HO" it seemed absolutely perfect.

We made our way to the mall and took our place in line. We would point at Santa and Eli would smile at him. I knew this was going to go so well.

And I feel like I need to tell a side-story here. Last year we went to the Santa at our local mall and much to my surprise and unhappiness he didn't have on the regular Santa suit - he had on his "workshop" outfit. Also known as kind of a "rip off".

But because I'm a sucker for traditions I decided to go visit the Santa suit-less Santa so that our displayed framed Santa pics would have matching Santas. Priorities.

As we waited in line we approached a tree where Eli and I took a picture last year. I thought it would be perfect to recreate the moment. 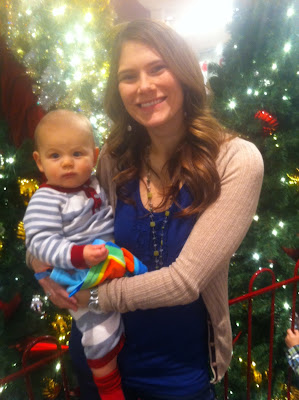 And then this year's pictures.... 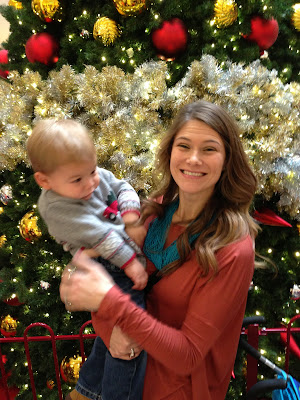 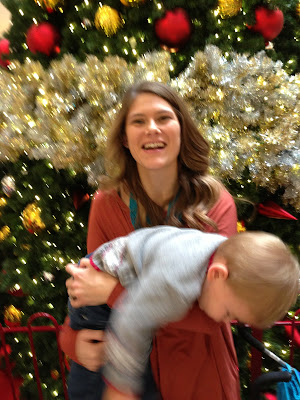 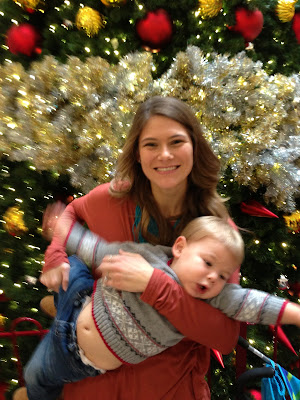 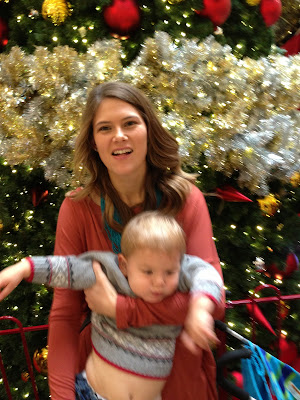 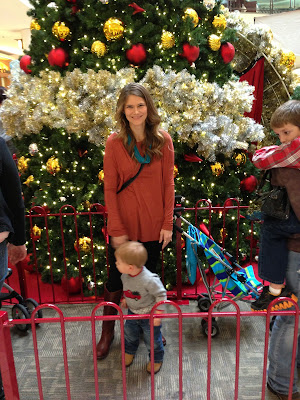 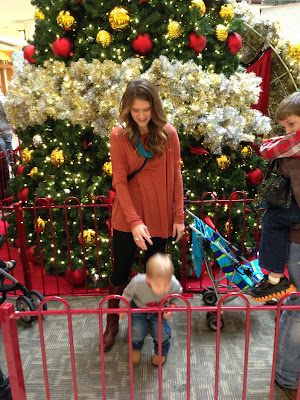 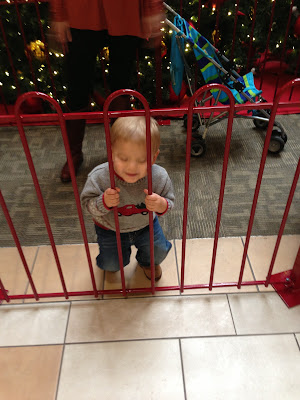 Well that went well... (also why has my hair not grown in a year? I should figure that out)

Despite our terrible attempt at a mommy/son beautiful moment captured on camera I still held out hope that Eli's encounter with Santa would be magical.

We kept getting closer to Santa and Eli kept trying to run to Santa. PERFECTION.

Then it was our turn. Eli started walking to Santa holding my hand while Santa looked on with his arms wide open (which would be creepy on any other given day).

The closer we got the slower Eli walked. Till he basically stood there looking at Santa with a look on his face that can only be explained as "oh crap I have to actually sit on that man's lap?"

This is where I win the best mom of the year award. I threw Eli on Santa's lap took off running and told the camera guy to snap the picture. We had already paid our RIDICULOUS fee so we were getting a picture. Perfect smile or not.

So here is Eli with his "Ho Ho" 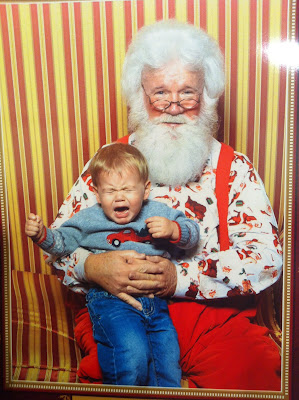 Please note Santa's death grip around Eli. Also, after today Luke and I had a conversation we've never had before. We debated whether we thought Santa's across America wear "protective cups".

As soon as I grabbed Eli he was fine and gave Santa a chipper goodbye.

It was a fun morning and one we will definitely remember!