Recently I learned something that has become invaluable to me.  I thought I had a problem that I was unable to solve and I found a way to solve it and now I want to share my wisdom with others because I once heard.....

Actually I didn't once hear that, I just googled "wisdom quote" to try and find something for this post and it was the first one that came up.

And really, the wisdom that I'm going to share with you involved how to get on a pair of tight boots, so maybe I should have googled a quote about being materialistic?

SO anyways let's get to the materialistic wisdom.

After several months of lusting over a pair of boots (clearly not  exhibiting one of the fruits of the spirit here) I finally decided to splurge and get a pair.

I actually found them on a site that sells them for a bit less than how much they normally retail for, the only problem is that once they are sold out that's it, you can't get that size again. So when ordering I knew I needed to get it right the first time cause there was no going back, Jack (I've been watching too much Duck Dynasty).

I waited not so patiently for the boots to arrive at my front door and low and behold one day they arrived and I might have squealed. Maybe. Probably.

I ripped open the box and sniffed that amazing leather (again, not proud of my lust here) and immediately fell in love.

I put on a pair of my socks and attempted to put on the boots. ATTEMPTED being the key word here. The left boot wouldn't budge. I would get my foot in but when I tried to move past the ankle area it wouldn't give. At all.

My friend Sarah was here and was able to witness it all and thought it was hilarious. It was the biggest White Girl Problem of my entire life and she was laughing before my eyes. Luckily she was able to capture the moment: 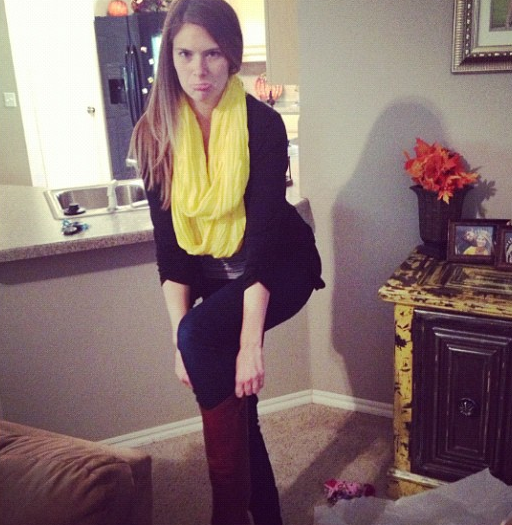 I called the company where I got the boots and they informed me they were all out of my size and I would have to just get my money back. Um. no. Not an option. My foot was going to go into those boots even if I had to drink some magical foot shrinking potions.

I did a little research and found that if you put a plastic bag over your sock it helps your foot slide in.

I tried it and my foot slide in like butter. Well butter going through a grinder, but still much better than before.  And once my foot was in I ripped the bag off.

It was the perfect solution! Now every time I put my left boot on I have to make sure I have a plastic bag handy to put over my sock.

I also make sure Luke isn't around because he rolls his eyes every single time and tells me that I'm crazy, which I reply: no, I'm a GENIUS.

Now this is where you need to pay close attention. Not all plastic bags are made alike.

For awhile I was using a Target bag and while it helped my foot slide in was hard to tear the bag away once in the boot.

The best bags I have found are very thin bags, think: Dollar Tree, Hobby Lobby and TJ Maxx. Even Wal-Mart bags work great even though they are a bit thicker than those others, they are still thinner than Target.

I bet your mind is blown. You had no idea there were so many plastic bag consistencies!

Stick with me. I am a wealth of knowledge. 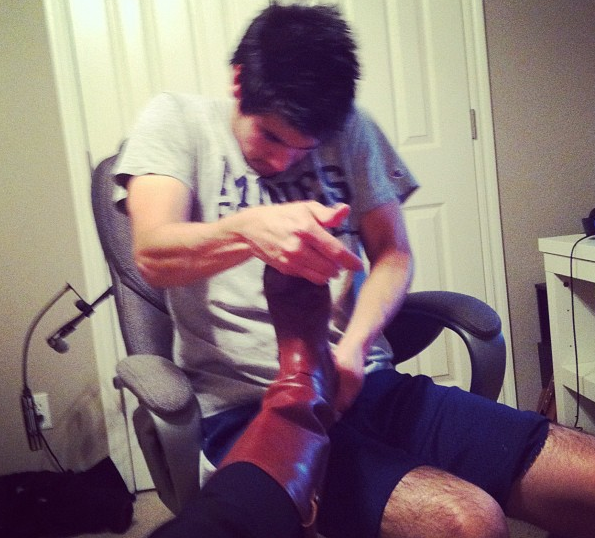 Beauty is pain. Or maybe materialism is pain?

Either way I hope my learned wisdom helped you in some way.

Maybe you just learned not to pay a dumb amount of money for a pair of boots you've never tried on.

Unless you have a magic plastic bag.
Posted by Megan at Monday, December 10, 2012