When Luke and I were looking at houses my first concern was always "where will our TV go?".

Which is a bit silly, yes, BUT nothing is worse than an awkward living room with less than desirable viewing of the TV.

OK yes, there are a lot of things worse than that, and I'm sure the top interior designer would tell you not to position your furniture around the TV, but for us normal non-fancy people we do like our furniture positioned around the TV so having a living room that accommodated this simple request only made sense.

When we first saw our house that we live in now I was taken aback by the perfect living room layout. It had a huge wall perfect for a TV with enough room to position the furniture around the TV. It seemed like a dream for any TV-aholic such as myself.

We bought the house, moved in, and positioned the furniture, it was then that I realized I had been going about this all wrong.

I may have had the perfect set up for taking in countless hours of mind-numbing housewives but I also had a GIANT BLANK WALL that seemed impossible to decorate.

I tried every brainstorming tactic short of hiring an interior decorator to fill the space but nothing seemed to come together. It was such an awkward space.

I wanted to get one of those big nice entertainment centers but those are expensive and it seems we have a million other places that need our money, giant blank walls were put on the back burner.

So a couple of weeks ago I made it my mission to take care of the giant bank wall on a budget. And 3 wall pieces, one hanging of a shelf, marriage counseling for hanging shelf, and a couple of decorations later our giant blank wall is covered. I can rest easy now.

This is the best "before" picture I can find right now. I tried to avoid taking pictures of the whole wall because it bothered me so much. I have issues. 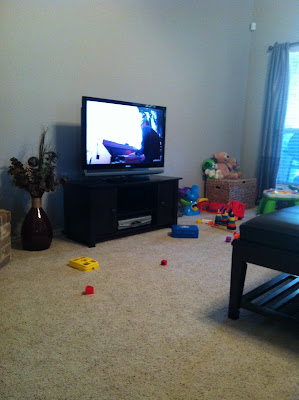 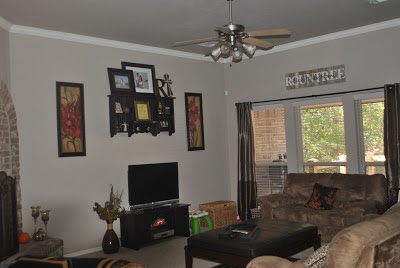 I love how it turned out! 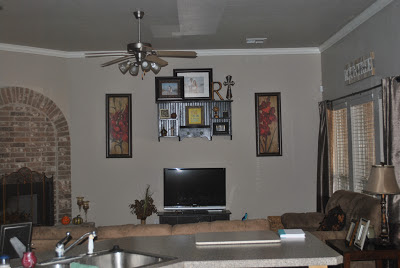 I found the shelf at a craft show I went to a couple of weeks ago through the vendor "Just Dreamin"
When I first saw it I thought maybe it had potential and the more I looked at it I realized it was perfect! 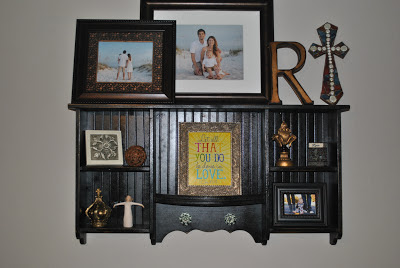 I found the printable in the middle on pinterest. 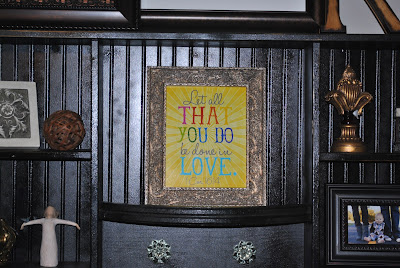 I'm just so relieved to have that wall covered!