Two weeks ago I blogged about us going to Luke's classroom to get it ready for the school year, a couple of days later he was presented with a job opportunity that he felt was best to pursue. After a couple of interviews and a job offer, he officially accepted the job and resigned from his job as a teacher.

While he is so excited about his new job he is also sad to leave the classroom. He learned a lot in his first year of teaching, and was not only a great teacher but he excelled in his job. On his last day of teaching he brought home a huge stack of cards and handwritten notes and letters from students saying how much they will miss him and how he helped them learn and really enjoy class. Luke assures me that they are just "dramatic" 7th graders but I know that he is extremely (and pretty annoyingly) humble. I can tell you I wouldn't have taken the time to write a hand written note to a teacher if I didn't truly appreciate them. I know his school is going to miss him.

We spent a year adjusting to Luke's schedule as a teacher, he had to leave very early in the mornings, he would get home late most days because he would go to the church before coming home to take care of his duties there. I couldn't call or text him during the day because he was always in front of the class and couldn't talk on the phone. When he didn't have lunch duty we were able to talk briefly during his lunch time but that was about it.

Now I can actually call him during the day and he came home and ate lunch with me and Eli. It was so great. We are excited about his new job and I'm excited to watch him grow again. I am so proud of him.

He had a meeting to go tonight so Eli and I went to a football game at the University where I work and Luke and I graduated. 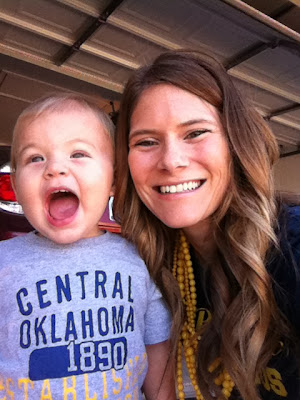 We had a great time, we ate dinner on the lawn while a live band played and Eli danced and danced. 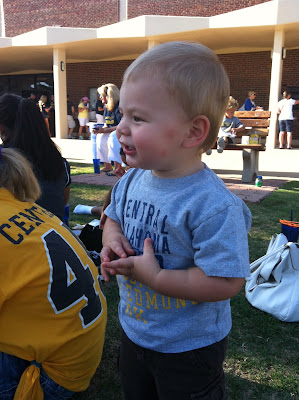 Then we went to the football game where Eli was thoroughly entertained for about seven minutes. After that he was done, done, done. Until the marching band performed and then that kept his attention and then he was done again.

We left at half time and arrived home the same time Luke did. Tonight while at the game I was thinking about how glad I am that we are still so actively involved with this university. I remember sitting at my first home football 10 years ago being SO nervous and now my baby boy runs around there and it just feels like a second home. I can't wait to create more memories there.