The Olympics will always hold a special place in my heart.

Not just because I can remember watching them growing up. I was on a giant road trip with my grandparents during the 1996 Olympics and I remember with each stop at a hotel each night we would watch the Olympics.

I also remember us missing the opening ceremonies because I pushed a button on our hotel wall that cut out all electricity.

WHY WAS THERE A BUTTON IN OUR HOTEL ROOM THAT CONTROLLED THE ELECTRICITY?

I still wonder that to this day.

It forever scarred me to not touch random buttons. My grandparents and I still laugh about it to this day.

Although they weren't very happy at the time when they missed Celine Dion singing.

The Olympics between 1996 and 2008 are kind of a blur. Those were also my teenage years so I'm sure I was much busier watching recorded performances of N'Sync and putting the VCR on slow motion to watch them dance than to watch the Olympics.

But out of all the Olympic seasons of my 28 years of life, the 2008 Olympics stand out the most in my mind.

Luke and I had just gotten married that summer and we were beginning our life together. At that time it was just normal, mundane life. Go to work, come home, cook dinner, eat, watch the Olympics.

But looking back those were such sweet, special times together. Learning each other.

We were in our rinky dinky ole apartment that I later hated, but at that time it was our little nest, and I loved it so much. I was finally married to Luke, finally living married life, sitting on the couch watching the Olympics with him. Ordinary? yes. But oh so special to me.

Last night we were watching the Olympics and Eli was running around in just his white Pampers diaper throwing his football, and ever so often stopping and screaming at the top of his lungs.

Everytime he does this Luke and I look at each other and just laugh. How did this little running, jumping, screaming, throwing temper tantrums thing come from us?

As the night went on Eli drank his nightly milk, ran around some more, tackled his dad, got tickled by his dad, slapped his dad and was then put in time out, drank some more milk, slapped his mom, all the while the Olympics played in the background. 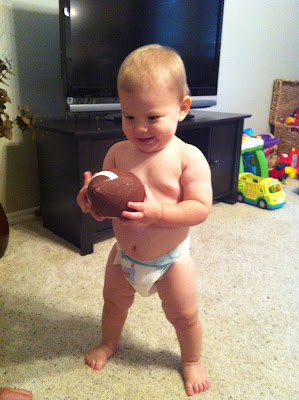 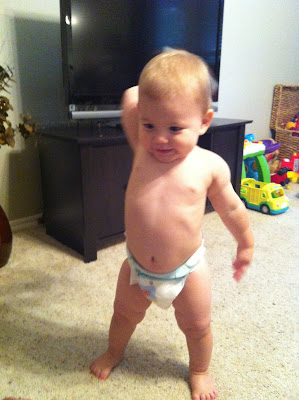 And looking from the outside in it seems ordinary, and right now through my "can't see past the moment" eyes it seems ordinary. But one day I will look back and remember the 2012 Olympics and how we watched it while our toddler ran around us.

And it will be oh so special to me.

I love the competitions in the Olympics, diving, gymnastics and swimming are my favorite comps to watch, but Eli running around throwing a football at us beats those any day!

And for the record, this post is proof that becoming a mother will make ANY moment in your life a sentimental mushy moment. Including simply watching the Olympics. It's a talent.