Lately I've let my guard down.

The worst kind of guard. I've allowed lies, insecurities and fears to slowly creep into my mind and heart.

The sad thing is I know how it happens. It always happens when I quit spending consistent quiet time with the Lord. When I quit exhibiting the self control that I know I have in my life and instead allow negative thoughts to creep into my mind.

Insecurity has been plaguing me lately. And for me its not insecurity about how I look or what material things I have, yes I love some nice material things, but I also don't put my hope and happiness in material objects.

Instead for me, insecurity comes in the form of comparison, comparing myself to others personalities. I've always had a complex with my personality. I feel like everybody is more likable, less awkward, more outgoing, less abrupt. Basically just a better person all around.

Let it be said that lack of time with God plus comparing yourself to others and dwelling on bitterness can not and will not equal anything good.

Last night while lying in bed I was having one heck of a pity party. I was entertaining every lie and negative thought that was coming my way. The bitterness had taken full control and the negativity came soon after.

Nothing was safe from attack I was evaluating and tearing apart pretty much every area of my life.

After some pretty extensive partying going on in the pity department, a verse from the bible popped into my head. It wasn't word for word but it was good enough to give me a minute to reevaluate was I was doing and what was going on in my mind and remember what I NEEDED to do.

The verse was one about staying alert and watching for attacks from the enemy who prowls around looking for someone to devour.

And then other verses started going through my mind:

The enemy comes to steal, kill and destroy.

I had a choice at that moment to entertain the negative, or entertain the positive. Both could be life changing words which direction did I want to go?

As I sat there, seriously contemplating whether I wanted to continue with my pity party or move forward with these words of life I decided to look at my life devotional for the day. I was already in bed with the lights out, with Luke asleep next to me, but I decided to turn on the lights and read the short devotional.

And sure enough, there in front of me was the very verse that was brought to my mind when I wanted to do nothing but entertain negative thoughts. The same exact verse. The date was June 19th and this was the verse for June 19th. Ok God, I catch your drift.... 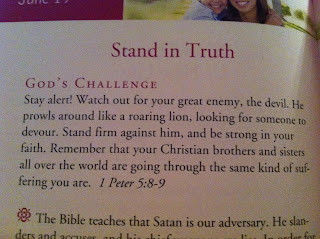 Part of my pity party was thinking about how God doesn't listen to me anymore and how lately it feels like I'm talking to a brick wall rather than the close relationship with the Lord that I have experienced in the past.

And then just like that He shows me that He is still there, still listening, still teaching me. One (of many) lessons learned.

Last night, after a record breaking pity party I was reminded just how important it is to memorize God's truth. In the moments when you least expect it and probably most need it those words that you once memorized are brought to life.

I'm not the best at scripture memory, but I want to get better and this was definitely the encouragement I needed.

.....take captive every thought to make it obedient to Christ. 2 Corinthians 10:5