I've never been much of an active person. I played sports until 8th grade, but after that you had to go through "try outs" to play sports as opposed to simply getting your parents to sign a form saying you are allowed to play, and insecurity set in. I didn't want to take the risk of not making the team so my career as an athlete ended there.

It was a pretty good career also. Right fielder is a pretty hard position.

In my later years of high school I started working out here and there. I would go with friends to a nearby gym and it was more of a social event than it was anything else.

Then I went to college and fear of the "Freshmen 15" set in so I immediately purchased a gym membership (I'm still not sure how I paid for that, graduation money maybe?) and worked out here and there but I still gained the Freshmen 15.

Then I quit working out and the weight went away. So for the next 4 1/2 years I didn't even think about working out.

But as the years have gone on I've realized the benefit of physical exercise, not so much for the weight aspect, but for feeling good and not sluggish, and being "physically fit" not "skinny".

And going along with the theme of yesterday's post, since having Eli it is hard to find the time to fit in the jogging that I want to do, and even if I find the time I hate running outside if it is above 90 degrees or below 70. So that doesn't leave us with a lot of months in the year....

I got a treadmill from Luke's parents for Christmas and I have used it almost every other day (I don't run everyday). Even if I just get on it for 20 minutes while Eli eats his breakfast in his high chair next to me, it's nice to know that I did something that day.

I recently found this image on pinterest that linked back to this blog. 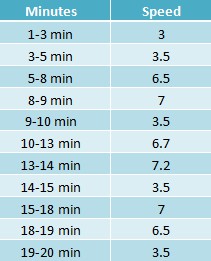 This a beginners interval run and she also has an intermediate and challenging running interval workout.

Funny story: I didn't know there were levels and the first time I tried it I did the "challenging" run. It was intense, and I thought my head was going to explode, you know that feeling where ALL THE HEAT IN THE WORLD is rushing to your head and your legs can't keep up and you think you are going to die?

So if you have trouble squeezing in some jogging time this is a good 20 minute pretty intense workout.

It has really helped me stay on track and really who doesn't have 20 minutes to squeeze this in? Just wanted to share!