Today is Luke's last day of school for his first year of teaching, and I am SO proud of him.

Luke never intended to be a teacher, he got his teachers certification on a whim and we both thought he would never really use it, it was just something "nice to have" and then one day he got a call and without pursuing a job we both watched as all the right doors opened up and in some weird way he became an English teacher.

To be honest I was a bit nervous for Luke as he headed into this new job, he came from a job where he had a lot of free range to do what he wanted, when he wanted, and could wear what he wanted, and now he was at the beck and a call of over a hundred students, and had a set schedule of when to eat and when not to eat. It was a big change.

And, since I'm being honest it was a big adjustment for not only Luke but also for me. In the past we would eat lunch together several times during the week, and that was no longer an option. We would also talk several times during the day and this was no longer an option. There have been times this year where it has been frustrating for me because I want to reach him THAT MINUTE and I can't. I could call the school and reach him, but for some reason I don't think he would find "do you want enchiladas or poppy seed chicken for dinner" to be a question worthy of interrupting his day.

As much as an adjustment as it has been, it has also been a joy to watch Luke grow. We know that this job was God-sent at just the right moment for various reasons. He had no idea, but he needed it.

It has been fun to watch him transition into "teacher mode" although I wish he would leave his disciplinary acts at the school. I've never been told "stop acting like my students" or "wow you are acting like a 7th grader right now" so many times in my life. Sometimes he even disciplines me like a teacher would a class. He needs to reign it in a bit at home and get out of teacher mode!

Aside from the crazy teacher mode at home it is fun being married to a teacher, hearing all the crazy, funny and exhausting stories that take place during his day.

A couple of weeks ago Luke told me that he remembers standing in front of his class the first week of school thinking, "there is no way I can do this, I am not ready for this" but he did it and he thrived. I've heard from numerous people about what a good teacher he is, and I'm so proud of him!

Not only did he learn a new job this year, but he maintained his role as worship pastor at our church as well as doing other jobs here and there. He works so hard for our family and I am so thankful for a hard working husband.


Luke's students wrote down some words that describeLuke and I thought it was so cute and funny. 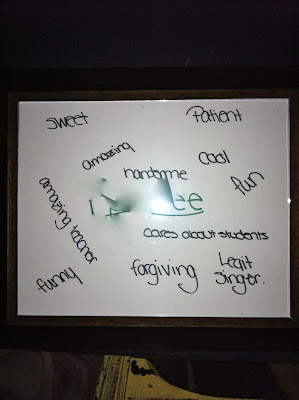 My very favorite description is "legit singer" mainly because he has never even sung for his students. Cracks me up.

I try not to do mushy, gushy posts around here becauseI feel like my blog (and Facebook if we are getting technical) is not the appropriate place to tell my husband how proud of him I am and how much I love him when I could just tell him in person, but I did want to share his success in his new job.

Everyday I thank God that he directed my path to meet Luke's path. There are many reasons why I love him, and his dedication to his work is one of those reasons!