Luke got up and left for band practice at church and Eli and I woke up and got our morning started.

Breakfast, a bit of playing, shower and getting dressed. Normal.

We managed to do all of this successfully and we were headed out the door right on schedule.

And then the whole morning took a drastic turn.

I rounded the corner of our bedroom holding Eli, on our way to the garage when I was stopped dead in my tracks.

There, before me, was my worst fear in all of its slithery, hissing, no legged fashion.

I have always claimed that if I ever saw a snake in my house I would fall down and die right there. This was before I had a child to care for, laying down and dying was no longer an option.

As I stood there frozen, staring at the snake I started shaking. Not a small tremble through my body but a full on, convulsing in a self inflicted I HATE SNAKES sort of shaking,  wondering WHY this was happening to me.

I'm a good person!! I mean I gave up aspartame for goodness sake, how much more of a good person can I become?!?!

As I stood there shaking and staring at the snake while holding a laughing baby who thought my shaking was all in fun I did what came naturally. I called Luke. I knew there was nothing he could do but I wanted him to know that he left his wife and child at home ALONE WITH A SNAKE.

He didn't answer. I called two more times and no answer. It's a good thing the snake wasn't attacking us and holding us hostage in our bedroom.

I was still standing in front of the snake watching it to make sure it didn't move while wrestling with Eli who wanted down on the ground BY THE SNAKE.

I then called my dad, again, not sure what he could have done but it felt right at the time. He wasn't available but my mom who I spoke to told me to just "pray for strength".

Now, we know I'm all about prayer, and I love the Lord, however, praying for strength in this particular moment was NOT GOING TO MAKE THE SNAKE DISAPPEAR.

As I was contemplating taking out a screen and escaping through a  window I looked over and noticed a plastic tub in our bedroom. PERFECT. I would put the tub on the snake, trapping it and escape the house unharmed with my child on my hip. Brilliant.

I put my baby down who immediately went lunging FOR THE SNAKE, so I had to lock him in his room. I then got the tub and stood as far away from the snake as I could while still being able to place the tub over Alfred (I named him that). I watched for a bit. He seemed confused as to why he was trapped and didn't look like he was going to escape. 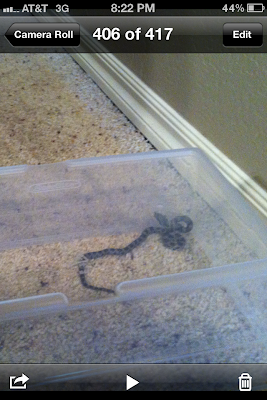 I congratulated myself on my genius thought of putting the tub over the snake and for staying brave when all I really wanted to do was scream and cry. A baby changes everything. I'm convinced before Eli I would have crawled on top of a counter and not moved until Luke got home.

I grabbed Eli, hopped in the car and shivered the entire way to church with thoughts of snakes crawilng on my body.

When we got to church I made sure everyone within shouting range knew that I had wrested with a snake that morning. Several people asked if I had put something heavy on top of the tub so the snake couldn't slither out.

I'm sorry, as weird as it may seem I am not skilled in SNAKE TRAPPING. I never thought to put something heavy on the tub I just wanted out of the house.

When we got home Luke and I tiptoed into the house and much to our horror discovered my awesome snake trap did not hold up. We stared at the empty tub both realizing at the same time that there was a snake loose in our home.

And then I died.

At least I thought I was going to. It was traumatic.

I started feeding Eli his lunch and left Luke to hunt out the snake.

It was at this point and moment in my life that I realized that my big, strong, handsome husband was indeed scared of snakes.

That would have been nice to know before I said YES when he got down on one knee.

I watched him prance around the living room similar to a little girl playing hopscotch while looking for the snake, all while holding a shovel. It was not his most attractive moment.

We finally located Alfred behind the couch and thus the snake chase began. Luke brought in several boxes, shovels, and brooms in his attempt to do something. I'm still not sure what he was trying to do. I know the ultimate goal was to get the snake out of our house but his means of going about this seemed a little strange to me.

I have five different videos attempting to film Luke and Alfred. All met with a "TURN THE CAMERA OFF" So rude.

In what may be known as the longest, most drawn-out snake capturing story ever, Luke managed to catch the snake using a cardboard box and shovel.

It was a few hours after the snake left our house that I realized I was suffering from SPTSD; Snake Post Traumatic Stress Disorder.

Every corner I turned, every cord I saw, every shadow on the ground I thought was a snake ready to jump out at me.

I still see snakes out of the corner of my eyes, and don't even get me started about the blanket that grazed my shoulder tonight when I sat on the couch. I screamed so loud. It was terrifying. I'm still recovering.

For the record the snake was a "rat bull" snake and is not poisonous, nor was he very big. HOWEVER when it comes to a snake in my house I don't care what size it is or if it is poisonous or not, I WANT IT OUT.

We have been 24 hours snake free and I'm praying (literally) that it stays that way. I really don't want to have to move.
Posted by Megan at Monday, April 23, 2012