The Party That Almost Wasn't

Today was Eli's birthday party and it was a great time. I get super uber weird in party planning situations which is exactly why I almost didn't even have a party, but I knew I would regret it if I didn't do it.

It was a fun time and so many friends and family came to celebrate Eli's first year of life!

But the party almost didn't happen.

Fast forward to Wednesday. My best friend and her son drove up from another town to come help me get ready for the party. We decorated, prepared food and got almost everything ready. She noticed Eli was cranky but we both decided it was simply teething. He was getting three new teeth this week so it made sense.

That night when he went to bed I took his temp and he had a fever. Again, teething was the culprit in our minds.

The next morning Eli had his one year appointment. I mentioned all the symptoms to the doctor he thought it was maybe his ears, so we checked his ears and no infections. He then suggested we give him a flu swab to see if he had the flu. He thought he absolutely did not have it by how normal he was acting, and I thought there was NO WAY he had it but it was better to check.

And wouldn't you know. His flu test came back positive. Eli had the flu.

Here I was sitting in my fully decorated house, looking at all the food that was ready and watching my baby who was acting completely normal and knowing I needed to cancel the party. I was so upset. A little too upset. Kind of ridiculous now looking back. But I had put so much effort into making this day special for Eli and our guests and I was so sad to think about canceling it.

Plus I felt like the word mom EVER that my child had the flu and I had no idea. Zero.

Anyways, to make a really long and dramatic story short, Eli's last fever was onWednesday night and the nurse and doctor told me as long as he hasn't had a fever in 24 hours we were good to go. I continued to monitor him and he never got a fever again after Wednesday night.

So after LOTS of disinfecting our home and calls to invitees I moved the party to Sunday. Just to give Eli one more day between the flu and the party (even though he was perfectly normal by this point).

I'm fairly positive he had the flu all week and we caught it on one of the last days (if not the last day). Worst. Mom. Ever.

Friday afternoon we were back in party mode after 24 hours of thinking it was going to be canceled.

Sunday morning arrived, and we were ready to go. The last hting to do was to get the cupcakes and Eli's smash cake.

And then it happened. As Luke was carrying the amazing smash cake he dropped it in the parking lot.

For the first time in my life I was speechless. I had no words. It was like slow motion as I watched the cake fall and then watched my husband TRY AND PUT IT BACK TOGETHER. 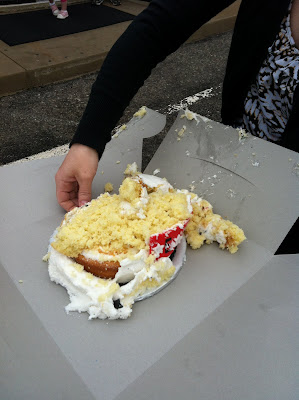 My amazing cake-maker was able to whip something up for us just in time for the party. Luke was so thankful.

Forever our children will wonder why dad isn't allowed to touch their birthday cake. FOREVER.

So we ended up having our party a full day later and with a revised cake but it was amazing. We had over 31 people in our home, loving on Eli, visiting, and eating the goodies. We are blessed with family and friends that love our son.

I can't wait to show all the pictures from the party, here are some sneak peaks: 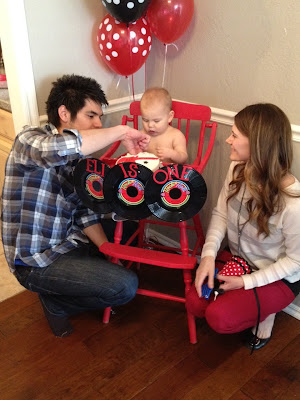 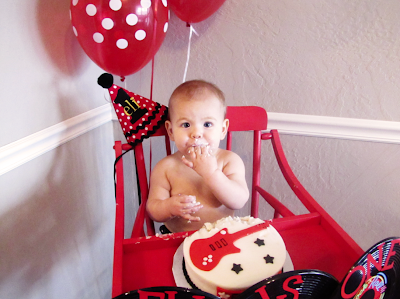 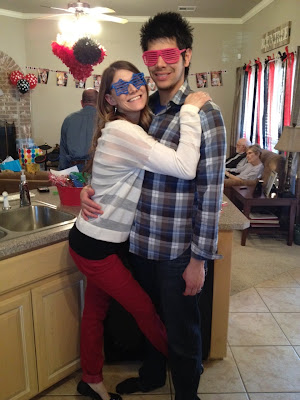 Happy first birthday to our son Eli. Fastest year of our lives.
Posted by Megan at Sunday, March 11, 2012