Today, Tuesday the 7th, is my husband's birthday.

And I remembered it was his birthday around 7:00am when he was leaving to go to work.

I had to run after him to tell him happy birthday even though I had been talking to him all morning.

This weekend, I knew his birthday was coming up, but then Monday happened and Eli was sick and had to go to the doctor and the doctor confirmed that he has a double ear infection and it was just a stressful day and I completely forgot that my wonderful husband's birthday was the next day.

I FORGOT MY HUSBAND'S BIRTHDAY.

I have to admit birthdays have never been a big deal to me. I'm not one of those people that makes a big deal about my birthday and declares it "birthday week" and all that.

In fact, last March I forgot it was my own birthday until I went to the Dr and had to write a check and asked what the date was, and when the receptionist told me it was the 14th I was shocked to find out that it was my birthday.

I had also just had a baby five days before so those days after are known as "CRAZY-TOWN".

I probably knew it was my birthday before I went to sleep the night before, but somewhere in the middle of numerous night feedings I forgot.

But it's still very wrong and sad to forget your own husband's birthday. I did manage to get Luke a card signed by both me and Eli and a small gift in time for his birthday dinner.

While eating dinner I asked him if he remembered what we did last year and he didn't. Which is probably good because I spent the night of his birthday crying on the bed about how much weight I had gained.

I think I really need to get better about this birthday thing.

I also topped off the night of crying about my weight gain with lots of Mexican food. Ionic or dumb?

And while we are on that subject next time I'm pregnant (way far in the future) I've decided to be one of those girls that is all belly. I blame Pinterest.

No eating Smores poptarts like they are being discontinued.

Basically all of that to say Happy birthday to my sweet husband. Watching him become a dad this year has made my heart jump out of my chest. I knew he was the best husband but I never knew (although I had my suspicions) that he would be the best dad. I am so thankful for him and can't believe that I got such an amazing husband and baby daddy. 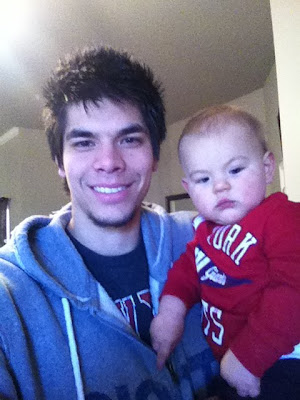