There is something about holidays that makes me forget to take out my camera and get some great pictures.

I have about 2000 pictures of Eli with dried baby food all over his face wearing a dirty onesie and mismatched pants.

But take a day where he is looking all cute in his holiday outfit and Luke and I are dressed and look nice and we are surrounded by family, and I completely forget to take out my camera.

But don't worry I do have my trusty phone pictures.

Our Thanksgiving week started off with these beautiful flowers that Luke brought me home, just to say he was thankful for me. I'm beyond thankful for that man. Flowers or no flowers. 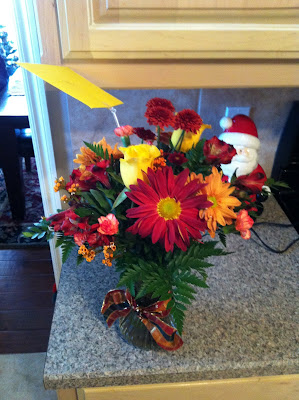 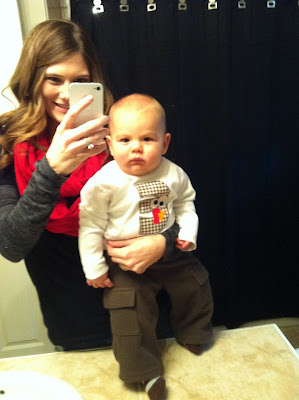 He slept through most of it, while I enjoyed the awful lip syncing (has it always been that bad?) and the floats that seem to be less and less each year.

We then hit the road and spent the next few days with family. Just how we like it. Kind of stressful at times but enjoyable almost all of the time.

Friday we went to a football game, Luke thinks it is important that Eli watch football his whole life. I think it doesn't matter if he watches football at EIGHT MONTHS OLD, however its important to Luke (and he brought me flowers this week) so I held in my opinion - which I might add is almost impossible for me to do and took Eli to the football game.

I'm sure he soaked in all the football and is currently running plays through his head as he sleeps.

Can you sense the sarcasm?

I might be a little bitter though because I had a bit of a traumatizing experience. I brought our Baby Bjorn and thought it would be perfect to use at the football game. It was already fitted to my body because I use it a lot during the day, so I told Luke I would just carry Eli in it even though it would be easier for Luke to do it.

That was before I realized we had parked about 2 miles away. Give or take a mile or two.

BUT IT WAS FAR.

I had a 21 pound baby strapped to my front-side trekking through a university campus. I serously felt like a contestant on the Biggest Loser.

If you aren't familiar with the Biggest Loser they strap giant sand bags to the contestants and make them walk across the desert while the people carrying said sand bags look and act like they could pass out at any moment.

Which is obviously JUST LIKE carrying a giant baby in a Baby Bjorn.

Here we are. If I look like I feel like I'm dying its because I DID. I was pretty convinced one of my ribs was cracked. I think it healed on it's own though because it feels fine now. 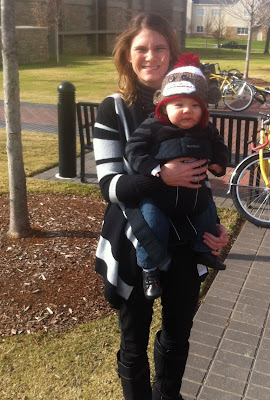 I did learn one thing from this experience. I could never be a contestant on The Amazing Race.

So that was our Thanksgiving. Oh and we ate a lot. I will never get sick of Thanksgiving food. We brought home lots of leftover and I am still eating and enjoying them. Luke is done with it all.

Such a wonderful week. And such a great time to reflect on everything I am thankful for. One thing I'm not thankful for? The Baby Bjorn. I would like to burn it.
Posted by Megan at Sunday, November 27, 2011