It took me longer than I thought it would to move Eli to his own crib, but when he was around 4 months old I decided I needed to quit procrastinating and go ahead and move him out of our room into his own room.

I never would have thought that it would be hard for me, but it was.

He has transitioned to his crib so smoothly and seems to love it. We did have a couple of rough nights here and there but for the most he loves his crib.

Before Eli was even born I remember seeing on my friend Jennifer's blog a post about letting her kids spend some play time in their crib. Well last week I was cleaning in Eli's room and remembered this post and thought it would be a good idea for Eli. So I put Eli and some of his favorite toys in his crib and let him play while I vacuumed and dusted in there.

He seemed to love it: 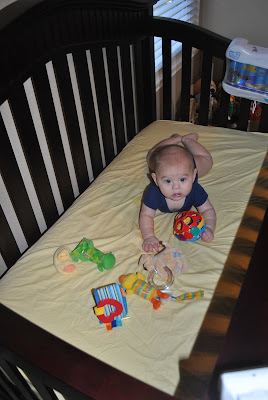 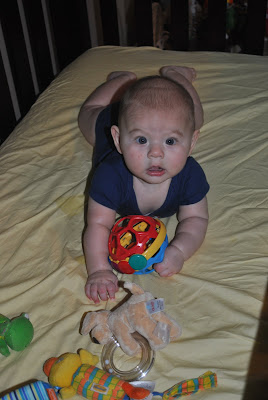 disclaimer: My child does wear something other than onesies. I feel like I only post pictures of him in onesies. I do have to say when we are home hanging out and not going anywhere he only wears onesies, they are comfortable for him.

When we first moved Eli to his crib he slept with his face in the bumpers so I decided to take them out. I do know about breathable bumpers but for us just taking the bumpers out out worked.

Until the other day. I walked in Eli's room to check on him during a nap and I found him like this: 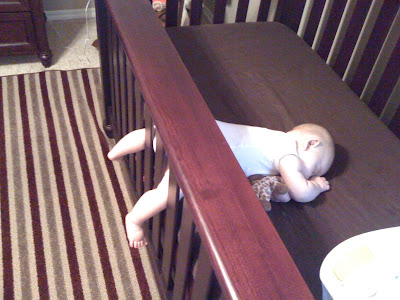 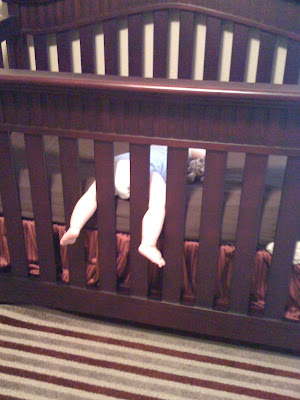 Poor baby boy!! Although I have to admit, he seemed to enjoy it and found it comfortable. I gently moved him back into his sleeping position (after snapping some pics of course) and he continued to sleep soundly.

This was a couple of weeks ago and hasn't happened since, so hopefully it was just an isolated incident.

I'm glad he likes his crib and plan to let him spend some more play time in there from time to time. I want his crib to be something he enjoys and not something he dreads.