Before I begin this post I need to make it clear that when I took all these pictures below I NEVER intended to put them in a very public place. Most of the time I take a picture to send to Luke or my mom only, however after trying 5 different baby carriers I decided to share my experience with each and the pictures help, regardless of how I look in them.
And I'm totally not a girl who only shows herself looking perfect. That really gets on my nerves. So here I am, un-showered, unkept, and in my daily outfit of tank tops and comfy pants. Word.
My baby carrier story begins with the BabyBjorn. You see before I was pregnant I never gave baby carriers much thought. I had a friend at church who used some sort of sling to carry her baby in but other than that I never thought about them or thought I would want one.
Then in October Luke and I went on a little trip and while at the airport I saw the cutest dad carrying his baby in a BabyBjorn. As soon as I saw that cute dad I knew I needed a BabyBjorn. Not for me to use but for my cute husband to carry our cute baby in while at the airport.
Necessities people.
So I added it to our registry and never thought about a baby carrier again.
Somebody gifted us with the BabyBjorn and I put it in the Eli's closet to use once he arrived. Again, not giving another thought to baby carriers. I had a BabyBjorn I was set.
Fast forward a couple of months. Baby Eli was here and I realized two things.
1. Just how flipping heavy that car seat is and lugging it everywhere is annoying
and
2. How many things I would get done around the house if I had Eli in a carrier and could use both my arms
So one day I remembered that I had the BabyBjorn tucked away waiting for Luke to use one day at the airport (p.s. we have no future trips planned, nor does Luke have a clue that I'm planning on him using the Bjorn). So I went and got it and put baby Eli in it.
He looks SO tiny in it: 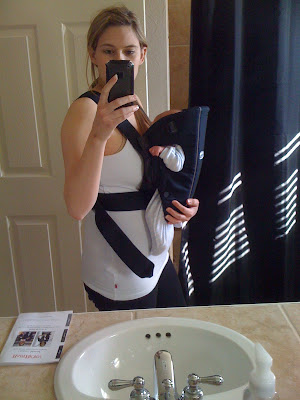 I liked the BabyBjorn but it wasn't what I had in mind for a carrier for myself. In my opinion this carrier would be good for use at an airport (I mean how many times can I beat a dead horse?) or hiking (I've never hiked in my life) or at the zoo or something like that.
But I wanted something for more daily use, such as shopping, chores around the house etc.
Then I remembered that I already had a sling. While I was pregnant I received a free code for a Seven Sling. I was so excited when I pulled out my sling. I thought it was perfect and just what I was looking for. I read the instructions about 20 times and could never get it right. Then I figured out I had ordered the sling way too small. I went by the sizing code but clearly I was wrong.
Eli smooshed in the Seven Sling, he looks miserable: 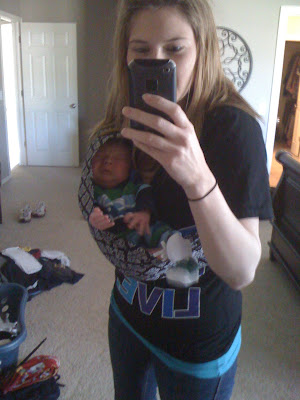 There was no way this was going to work so I started researching wraps/carriers/slings. I had NO IDEA there were so many options. Seriously there are a ton of options for moms looking for something.
I still liked the idea of a sling so I eventually decided on the PeanutShell Sling. From what I could tell it was perfect.
One thing I love about the PeanutShell Sling is how many cute fabric options there are. Very stylish. I loved this grey color and thought it would be easy to keep clean. Plus it had super thick sides that seemed like it would keep Eli safe. I thought this was a winner for sure. 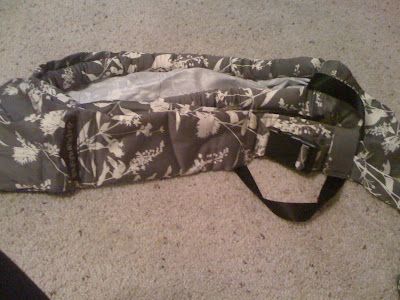 I brought it home and tried it on lots of times. I could never get Eli in it just right. His chin was always against his chest (which is a big no-no as it disrupts breathing). He looked very uncomfortable and I felt like he was far from my body. There was no way I could go shopping or run errands with him in this and feel like he was safe. It felt like he was just swinging around in front of my body, not very secure. So I returned it to the store.
I then realized that I needed something that was close to my body.
Lots of people on Twitter had been raving about the Moby wrap but it seemed so complicated to me. But after some persuading by friends I decided to give it a try.
The Moby wrap is great because you can get it at Target. Anything you can buy at Target gets bonus points from me! (however my Target only had one color, black).
I purchased the Moby, came home, watched the instructional video and put it on. It was like magic the first time. I have NO idea how I got it perfect the first time but I did. Here is Eli nestled in it the first time I tried it, he fell asleep instantly: 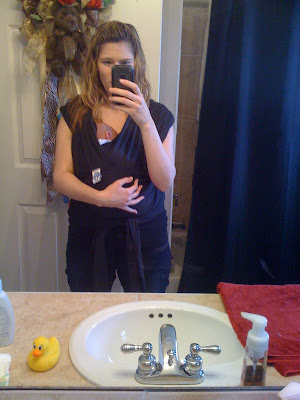 I was sold. I loved the Moby Wrap.
I love that you can carry your child in several different styles, Here is Eli sitting up: 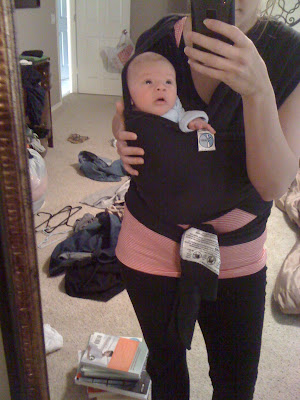 I thought I was done with my baby carrier search, but overtime I grew frustrated with the Moby.
First off, it is just one giant piece of fabric, so no matter where you put it on fabric is going to drag on the ground. I learned this the hard way at church one day during service. During the sermon I stood up and tied and retied this thing about 20 times trying to get it perfect. Inappropriate timing? I thought it would be a quick thing but it took several tries.
You have to get the fabric JUST perfect. It can't be too loose or too tight. Again I'm not sure how I got it perfect the first time. Every time I used it I would end up adjusting it a million times before getting it right. This started to get very frustrating. I still liked the Moby but hated that if I didn't get it just right it felt all wrong.
I decided to try one more carrier, the K'Tan. It is similar to the Moby but has much less fabric.
Ding, ding ding!!! We have a winner. The K'Tan is everything that I love about the Moby without all the fuss of messing with the excess fabric.
With the Moby I had to watch several videos trying to get it just right. The K'tan was so simple. I read the instructions and then put it on perfectly. So easy. Here we are the first time ever using it. Clearly Eli is a fan: 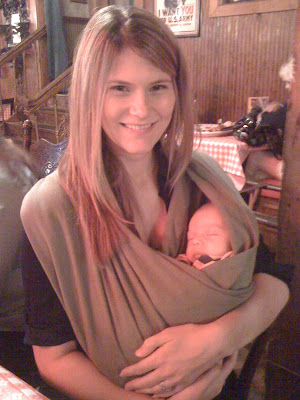 The K'tan keeps Eli close to my body and he feels very secure in it and he always looks comfy. Plus, like the Moby you can wear it several different ways. So far I've done the cradle position, and let him sort of sit up in it (sort of since he can't hold his head up yet). I'm definitely a fan of the K'tan and have already used it a lot.
Look how much Eli loves it! 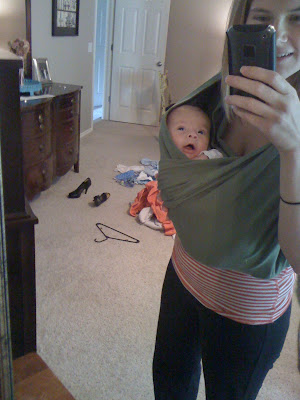 I will probably use the Moby from time to time as I think it is better for the newborn hug hold than the K'tan is, but the K'tan is definitely my go-to wrap.
So if you are thinking of getting a carrier/wrap/sling for everyday use I highly suggest the K'tan first and Moby second. You can't really fail with either but I prefer the K'tan.
This was crazy long and boring, but I hope that it helps someone somewhere.
And yes, my bedroom is always messy.
Posted by Megan at Thursday, April 28, 2011