I was eating lunch with some co-workers when I noticed that I was cramping. This wasn't anything totally new as I had been having menstrual type cramps since last week, but I did notice that they were a bit stronger than they had been the past week.

Plus I had just been to the doctor that morning and after checking me she said that she was almost positive I would deliver early and that Eli was "locked, loaded and ready to go." So it seemed kind of weird and appropriate that I would start cramping shortly after leaving her office that same day.

Oh before I go any further I have to talk about a fear of mine. I have always been afraid that I would go into labor and have no clue. It's just been a giant fear of mine for quite some time now. I've never had contractions so of course I had no clue what they felt like.

So when I started having cramps throughout the day I wasn't sure if my body was just cramping or if those were my contractions. I paid close attention to them and noticed that they were getting worse throughout the day. They would start in my back and would shoot through the front of my belly. They were painful but still not the screaming kind of pain that I imagined contractions felt like.

I had them all day and at home that night I started to get very flustered because I had no idea if these were contractions or if I just needed to use the restroom.

We were timing what was maybe contractions, or possibly just a stomach ache and they were somewhat consistent but ranged from every 3 minutes to every 7 minutes.

And now that we are talking about it, when was the last time that "bathroom pains" started in your back?? It's amazing the games your mind can play on you sometimes. Amazing and annoying.

Anyways, I eventually decided that I was in too much pain to ignore it and I was NOT going to have this baby in the bathroom floor. So around 12:30 pm we packed up all our hospital bags in the car and headed to the hospital.

I was hooked up to a monitor and checked out for about an hour. Eventually the nurse came and told me that I was indeed having contractions (ahh so this IS what they feel like) but I was not dilated enough to stay in the hospital.

She told me that I was definitely in the early stages of labor but it could go on for days or even a week or I could be back the next day to deliver. There was no way to tell.

So we went home and I barely slept a wink. The contractions were coming pretty consistently but not enough to do anything about.

On Tuesday morning I woke up later than usual (after sleeping for about 2 hours) and headed to work. I had no idea how long my contractions would go on so I saw no point in staying home from work.

Yes I was in a lot of pain. And yes I was uncomfortable, but what was the point of staying home and focusing on the pain when I could go to work and get stuff done?

So I worked all day and kept track of my contractions on a sheet of paper on my desk. Around 2ish my contractions became consistent but not very close together. Just about 8 minutes. But I could tell they were definitely intensifying as time went on.

Here is my contraction tracker at work: 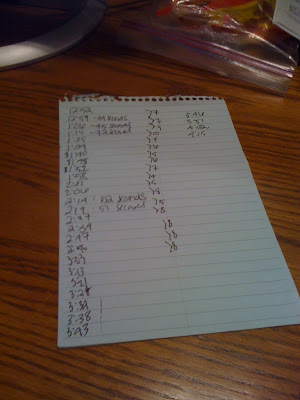 At about 4:30 I decided I couldn't take it anymore and headed home to take a hot shower and track my contractions. It was starting to get awkward being in so much pain at work. I was able to play it off earlier in the day but the longer the day went on the harder it was getting.

On the way home I was praying that the contractions would either move close enough together to do something or just quit all together, because this pain was not fun.

I do have to say that on the way home even though I was in a lot of pain, I stopped at Little Cesear's pizza to pick up some crazy bread. I had a contraction while ordering my bread sticks and had to stop mid sentence and breathe my way though it. I never explained myself and I'm sure homeboy behind the cash register though I was crazy, but I needed some bread sticks!!

I headed home eating my bread sticks the whole way. (eating bread sticks, and praying all while having contractions, I am an excellent multitasker) When I got home I hopped in the shower hoping that the hot water would help relieve some pain. Shortly after I got out of the shower Luke got home and started keeping track of my contractions.

By this time they were strong enough to bring me to my knees each time and definitely enough to make me cry.

I am a person who cries watching Full House, or cries when I'm watching a sporting event and the camera man zooms in on the losing team and you see the heartbroken faces of the players, however I rarely cry from pain.

Until I had contractions. Holy mother of pearl those things hurt.

Around 8:00 they were anywhere from 3-5 minutes apart, but I still didn't want to go back to the hospital for fear of being sent home again. I was a bit prideful and couldn't handle the thought of being sent home two nights in a row. So I just put up with the contractions.

Plus my contractions weren't consistent, some were close together and then some were far apart (never going more than 8 minutes apart). But I definitely didn't want to be sent home again, so I would just grit down and bear the pain each time one came.

I had told Luke that we probably weren't going to the hospital that night. There was no point in going and being sent home again.

Such a naive girl I was.

Around 9:00 my phone rang and it was my mom wanting an update, while I was on the phone with her I had another contraction. Hearing the pain I was in, she asked to talk to Luke and then told him that I was being extremely stubborn and it didn't matter if I got sent home again - I needed to get to the hospital A.S.A.P.

Luke agreed and once again packed up all our hospital bags in the car and we headed to the hospital.

I was in MISERABLE pain the whole way there. It takes about 25 minutes to get to the hospital from our house, but when you are having contractions it feels like a million minutes.

OK this story is getting pretty long so I will stop there and continue with arriving at the hospital and the actual birth part.

And just for fun look at what has been in my lap this whole time. Cute little burrito baby. 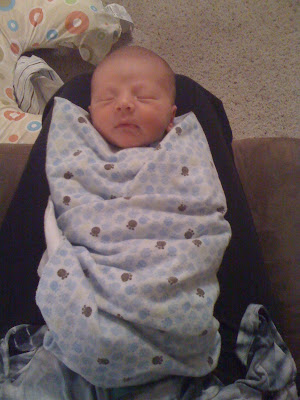 Definitely worth all those contractions.
Posted by Megan at Sunday, March 13, 2011