This weekend the meteorologists were predicting a giant snow/ice storm headed our way. Many people were skeptical but I have come to have full faith in the weathermen.
It seems as technology advances they are correct way more times than they are wrong. I will admit I was once a weatherman skeptic, but now I trust them fully.
So just as predicted Monday night the snow started coming down hard. By Tuesday morning we were completely snowed in.
And I started to panic. I've never before panicked during as now storm. In fact most times I enjoy it, however I've never been pregnant during a snow storm. Tuesday morning when I realized we could not get out of the house, I started freaking out that I was going into labor.
I fully convinced myself that I was having labor symptoms. Minus the whole water breaking thing. I consulted a friend and she thought maybe I was just overreacting. Just maybe.
I think this must be what claustrophobia feels like.
After I decided I was in fact not in labor I enjoyed the rest of the day and was very productive. I was so proud of myself for how productive I was considering a move at a snail's pace. Maybe slower than a snail's pace, a baby snail's pace. Or an elderly snail's pace.
Around 1:30 I got a text that campus would be closed again on Wednesday so I toned down the productiveness a bit because I knew I had another day.
All things were calm until around 9:00 when the power started flickering. However I don't think flickering adequately describes what it was doing. It was going on and off for about 2 hours and would stay off for a good 30 seconds to a minute each time and then come on. It was SO weird and SO annoying.
Also I've mentioned before that I'm scared of the dark, but I guess Luke always thought I was joking. He was honestly shocked at how scared I was to think we might be stuck in our house in the dark all night. Poor Luke was snowed in with me when I had two major freak out's in one day.
Oh well, he's the one that married me!
I really had a meltdown and I might have gotten in the fetal position on the floor. And it wasn't just because I was missing the Real Housewives reunion. That was only part of the reason. The other part was because of the dark. Eek.
I started running around the house trying to find various devices that would produce light but did not require power.
We don't have any candles in our house (long story) and only have one flashlight, but I was saved when I remembered I had this head lamp. Thank you mom for getting this for Luke for Christmas. I have no idea what your reasoning for getting it for him was but it SAVED ME during Snowmagedden 2011!
Luke was much too amused by me wearing this head lamp. I didn't care. I need LIGHT. 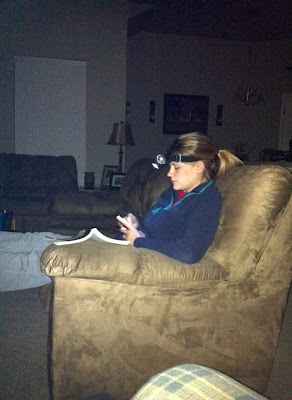 Finally after the power had officially been out for around two hours it came back on. I then sang the Doxology (praise God from whom all blessings flow......).
Today (Wednesday) I've been productive once again and then found out around 5:00 that the campus I work at will be closed again tomorrow! I plan to be REALLY productive again tomorrow. I'm loving this days to help me get ready for baby Tree.
Also, sometime in the afternoon I had the grand idea of taking my weekly pregnancy pic outside in the snow.
This resulted in more weekly fights than normal. And apparently I'm the bossiest person Luke has ever met. Rude.
But here I am at 34 weeks today. I've totally messed up my weeks on the blog because I did them the week before. So I don't have a 33 week update.
34 weeks in the snow: 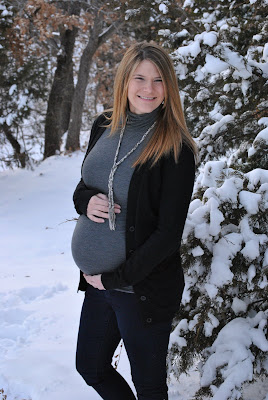