Crazy End to the Weekend

This weekend ended on a crazy note.


Sunday night I was in a car wreck on the highway. I had run to the store to get several items and ended up spending the rest of the night in the hospital. Thankfully I'm ok, the other person was ok and our sweet baby Eli is just fine.

I've tried to think back on various events in my life and I think this might have been the scariest thing I have ever been through. The fact that I am pregnant made it 100 times scarier.

After the wreck, I called Luke to let him know what happened and to come meet me. I then took to Twitter and asked my friends to be praying for Eli. I was just so worried about him. Later Luke told me he couldn't believe I thought to tweet in that moment, he wasn't upset just couldn't believe it crossed my mind. It crossed my mind because I knew there were prayer warriors that would honestly and fervently pray for Eli in that moment. I am so beyond thankful for the friendships I have made and for the people who prayed in that moment. There is a peace that comes from that, that cannot be described.

While waiting on Luke and the cops to get there I couldn't stop thinking about Eli and praying that he would move just a bit so I would know he was ok in there. I remember being told that sometimes drinking orange juice will get your baby moving around. I had just bought a gallon of OJ at the store (so random), so I got in my car and tore open that gallon and started chugging it like nobody's business. I needed to feel my baby move.

Eventually Luke showed up, and the highway patrol man showed up, we got everything squared away and Luke and I took off to the hospital.

We were there for about 5 hours and they monitored Eli's heartbeat the entire time and monitored me to make sure I wasn't having contractions. From the moment they hooked up the doppler they said Eli's heartbeat was strong and he was doing excellent. Praise the Lord. Such sweet words. They wanted to continue to monitor me for several hours though and I was just fine with that.

My poor husband was so so so sick and fell asleep almost immediately after we were told that Eli was just fine. I felt so bad for him that he was so sick. Here is my little snuggle bug in the hospital room: Doesn't he look so comfy? I definitely didn't look that comfy. 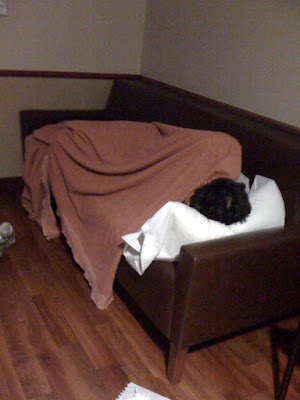 I couldn't sleep (imagine that, my adrenaline was still going strong) so I was forced to watch the 4 channels the hospital offered. There was NOTHING on TV except for some infomercials and some channel about newborn babies, which I thought was ironic considering I was pregnant, until I remembered I was in the maternity wing at a hospital. Not so ironic. Around 2:30 I found an episode of The Hill's. God Bless Lauren and Brody and their "reality" show.

Around 3:00 Dear John came on, I have wanted to watch that movie for awhile so I was glad to be occupied by some cheesy love story. P.S. that boy in that movie is cute.

And I'm so glad I have now recapped what I watched on TV in the hospital. Clearly somebody is a little TV obsessed.

Around 4:00am we were released from the hospital. Even though it was a long night, I loved listening to that little heartbeat for several hours. It was in the 140- 150's all night. And I'm talking about Eli's heartbeat not Luke's, I just listened to him snore all night. He doesn't usually snore but the sickness has caused the snoring.

When we got home Luke went to the guest room to sleep, trying to keep the sickness away from me and I just sat in bed for a bit before falling asleep.

My mind was racing and I eventually had to consciously shut my mind down. I praised the Lord for his protection and asked him to calm my mind, and then I fell asleep.

I am so thankful for the Lord's protection and don't doubt it for one moment.

I already had Monday off of work because of MLK day and Luke was way too sick to go to work so we just relaxed on Monday. I was very glad I had Monday off.

We are still praying that Eli stays put in my belly for the appropriate amount of time. Apparently in an effort to scare the HECK out of me, the nurses told me to watch for signs of contractions and labor, so we are praying that God would keep that little guy safe and put.

So that is the story of how I got into a car wreck at 7 months pregnant, not exactly something I would suggest.

And thank you to everybody who prayed that night, it was comforting!