When we found out we were pregnant, I knew without a doubt I wanted to tell our families immediately and in person.
Some people choose to wait to tell their families, and I for one do not know how people do that. I have nothing against it, but if pregnancy has revealed anything in my life it has shown that I am the WORST secret keeper of my own secrets EVER.
So we found out on Monday that we were pregnant and due to lots of events going on that week we knew that we weren't going to be able to go home to see our families until Friday. Looking back that doesn't seem like a big deal, but at the time it was the longest four days of my life.
But it gave me plenty of time to try and get creative. Try being the key word.
I tried to think of a fun creative way to reveal our pregnancy but couldn't really think of anything out of the box.
So eventually I decided to find a declious cookie cake and take it to my parent's house and casually say "Does anybody want some cake?" and then they would look at the cake and it would say "Coming Soon: Baby Tree!"
Genius.
Or at least it sounded good in my head.
So after work I ventured to my favorite store ever, Target to get a cookie cake.
They didn't have a cookie cake. What kind of bakery doesn't have a cookie cake? This could just be added to the long list of reasons why I have a love/hate/hate/love relationship with Target.
I looked at the other cakes there but nothing looked like what I had pictured in my mind. Plus I just really wanted cookie cake. It sounded delicious.
I was feeling defeated, until I remembered that there are about 10 other stores between my house and Target. I could stop somewhere else.
So I stopped at a local grocery store and was pleased to discover about 50 of the most delicious looking cookie cakes I have ever seen.
I'm not sure why there were 50, or how long they had been there, but I didn't care. I had a plan and I didn't want to change it.
I picked a cake and handed it to the guy working behind the counter and gave him a paper with the phrase that I wanted to be written on the cake in lovely blue icing.
I was also secretly delighted that this guy now knew my secret. Phew, one more person in the world knew I was pregnant.
So I waited anxiously for my cake to come back with the big beautiful words of Baby Tree on it, so exciting!
As the guy approached me with the completed cake I took a closer look at him and realized that he was not a guy/man but instead a guy/boy. We're talking a KID, a CHILD. Not someone who should be working in a bakery where people entrust their secret message to be written big and beautifully on a cake.
I mean was he even old enough to have his workers permit?!? I'm thinking his dad owns the store and just wanted his son to do something between school and bed besides play video games so he made him work at the bakery even though the kid has no idea what he is doing.
Because when I looked down to see the big beautiful words of Baby Tree on the cake this is what I saw: 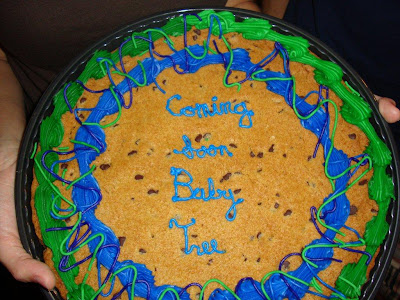 I'm sorry, what does that say? I can't read it because your FIFTH GRADE WRITING IS SO BAD.
Now I know why my English teacher in middle school always complained that students needed to learn how to write more legibly, because this is what teachers across America are dealing with.
I looked at the cake for about 2 seconds, but those 2 seconds felt like 20 years as I contemplated what to do: Ask him to do it again? Refuse to buy the cake? Pick another cake and take it home and write on it myself?
But of course I smiled at him, said thank you it's perfect and paid for the cake. I have issues with confrontation. Plus I decided that maybe I was overreacting. Maybe the cake wasn't that bad.
I decided to show it to Luke and maybe he would say it was the most beautiful thing ever, maybe I was just imagining it all in my head.
So I got home, got out of the car, went in the house and tried to mask my disappointment and excitedly showed Luke the cake.
He of course busted out laughing and said "Who wrote that?? You can't even read it."
I then had my second minor panic attack of the day and tried to convince Luke that I needed to stop on the way to my parent's house and buy a new cake.
He assured me that we didn't need another cake, that this one would be just fine, and funny. We all know he really just didn't want to spend the money on two cakes.
So later that night, we were sitting around watching TV and I told my youngest sister to go get the cookie cake so we could all eat some.
Reading that in writing it sounds bossy. I'm the oldest sister, I'm suppoesd to be bossy.
So my sister went over to the cake looked at it and looked back at us with the most confused look on her face ever. I told her to read aloud what it said to everyone and she looked back at me confused.
People, she couldn't read it. This is what happens when you get a fifth grade boy write your secret message on a cake.
Also, it was kinda dark where she was standing, but I still fully blame the person who wrote the words.
So she brought it over to my mom who was completely oblivious as to what was really going on, so my mom casually looked down and read the words aloud like she was reading for the first time.
Very short and stacatto like.
"Coming.........soon.........ba-by.........Tree?"
It was at this point that it sunk in and they all looked at Luke and I and all gasped in unision. It was pretty funny. We then talked about all things pregnancy related. And also about how horrible the icing was on the cake. In fact my mom sent it to one of her friends via text and she wrote back "I can't read it what does it say?"
It was pretty stinking funny.
Here we are with our cake. Please excuse my hot-mess look. I'd had an emotionally exhasuting day with a cake. 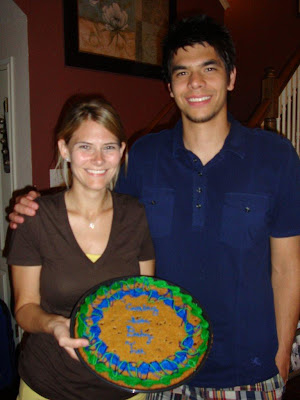 The next day we spent the day Luke's parents and gave them a baby bib with a card that said:

"They say being a grandparent feels like being in heaven, you'll soon find out in 2011"

A poet I am not. But it worked and they were really excited.

Needless to say our families were shocked and did not see this coming at all. As there had been no baby talk previously and we were on the "5 year plan".

So it was really fun and made the surprise even better!

As per usual Luke was right. The cake was fine and everybody thought it was funny. Plus most importantly it was very delicious.

So the lesson here is to never judge a cake by the writing on the outside. It may still taste good.