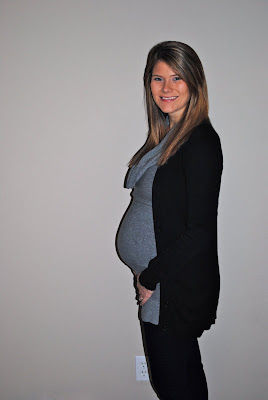 We are officially in the 3rd trimester! WOW!
I'm wearing jeggings in the pic above and I debated whether to take another picture for the fact that my belly is large and in charge and I FULLY blame the jeggings, and also cause I'm just that vain. However these weekly photo shoots are dangerously close to getting on Luke's nerves and I think if I would have asked him if to take my picture again after I changed clothes it would have sent him over the edge. I mean he would have done it cause he's the nicest person ever, but not without some grumbling. And I decided it wasn't worth the grumbling.
How Far Along: 27 weeks (actually I'm 28 weeks tomorrow but I like to recap the week before)

Total Weight Gain/Loss: This is a really personal question and I refuse to answer. Just kidding...but really the farther along I get, the more I realize how much I don't want to answer. Right now I'm at 26 pounds. I think this is the first week that I can see the weight in my face.

Maternity Clothes: All maternity pants and most shirts. The shirt pictured above is not maternity which could be why it looks SO TIGHT. We will retire that shirt now.

Movement: He moves A LOT at night. I didn't feel him much this weekend and it got me really worried. I came home from church on Sunday and drank a large coke trying to get him to wiggle around and move. Today my Dr told me if i put my phone on vibrate and put it on my belly it will get him to move.....interesting. He has been moving a ton today. I like to lift up my shirt and watch my belly move all around. I suggest only doing this in the comfort of your home.

Cravings: Just a cheeseburger on Sunday night. I could feel it in my bones I had to have it so bad.

Symptoms: Sleep has still been pretty bad this week. I have this horrible pain that I get from sleeping on my side, the only way to make it go away is to sleep on my back and while pregnant you aren't supposed to sleep on your back every night. I might try putting a pillow under half my back to make sure that I'm still elevated a bit and to hopefully help the pain. We will see if this helps. Also heartburn is coming back and I wake up with really bad leg cramps.

Best Moment this week: Spending the weekend relaxing with my husband. It feels like we are always on the go so it's nice to have a weekend here and there to do absolutely nothing but be together!

And my favorite husband quote of the week:
Luke: We should have waited till Christmas to tell our parents that we were pregnant that would have been fun.
Me: Ummmmm Don't you think they would have noticed that I gained some weight?!?!?
I don't think he thought that one through.
And a question:
When I was at my Dr.'s office I asked if I was going to have another ultrasound and she said as long as I continued to progress like normal I wouldn't have another one.
I have really been itching to see our baby boy again, and it seems like forever until March (and somedays it seems like March is tomorrow). SO I've been debating whether to go ahead and get a 3d/4d ultrasound. It will be a pic price (in the mid hundreds). So do you think it's worth it?!? Did you have a 3d/4d ultrasound when you were pregnant? Was it worth it? Did you not get it done and regret not doing it?
I would get it done in Mid January. Part of me thinks I need to just wait and see our precious baby when he comes out in March and the other part of me wants to pay the $$ and see him now.
Thoughts?
Posted by Megan at Monday, December 20, 2010