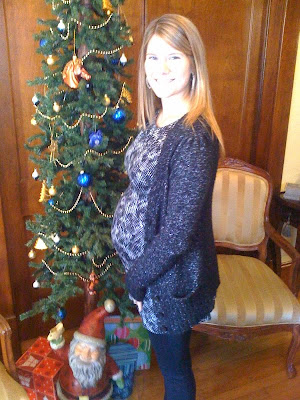 I had stuff to do after work and knew I wouldn't see Luke till later that night when I was tired and sleepy looking so I had a co-worker take this picture at work. The sunlight is hitting my face which makes me look very angelic looking, don't be fooled. Also, we are focusing on the belly here, not the face.

Also in pregnancy news: sometime between Saturday and Tuesday I grew A TON. Actually I think it was Eli who grew, but still I got large(er). I can definitely tell he is bigger in my stomach, as I feel him in more than one place at a time. Plus my belly button has started doing weird things. I have a very deep belly button so I dont think I will get an "outie" but it has started changing shape according to where he is sitting. It's so funny to watch!

How Far Along: 26 weeks (actually I'm 27 weeks today but I like to recap the week before)

Total Weight Gain/Loss: I'm up to 21 pounds, but I mean really who is counting at this point? (besides the Dr. who will probably give me the smack down at my next appointment)

Maternity Clothes: All maternity pants. And if I'm going to be honest (which, when have I not been?) those are getting a little snug also. I'm not sure what I will wear in February but I'm looking for work appropriate Pajama pants. Shirts are all pretty much maternity. If I could go back in time I would have bought a size up in maternity pants instead of buying my usual size.

Movement: I'm not sure how much babies are supposed to move at this point, but he mainly just moves around at night. I feel him some during the day, but at night he is having a party in there!! Love of big movements and I feel movement on both sides of my belly at the same time. He's having fun in there and he is definitely bigger!!

Cravings: Nothing in particular. I honestly feel like my eating habits aren't that different from what they were pre-pregnancy. And every time I say this Luke busts out laughing, so apparently he thinks differently.

Symptoms: Little to no sleep has finally hit me. I have been tossing and turning every night this week and I think it's because he has been growing so much. I am exhausted during the day. I went to bed at 9:00 last night, I think the last time I went to bed at 9:00 was when I was 5 years old. Plus I wake up many times a night to go to the bathroom, most of the times they are false alarms, even though I felt like I was about to wet the bed!

Best Moment this week: Spending time with college friends talking about kiddos and pregnancy, and also feeling him a lot more.

And my favorite husband quote of the week:
Whoa, look at your belly, and you still have 3 months to go!!!


Always a source of encouragement that one.


And for the record, Luke's comments never bother me. He tells me all the time how beautiful he thinks I am while pregnant and mushy stuff like that. I choose to share the hilarious stuff he says when not thinking because it really is funny to me.


And a front shot. I can't get over how much I grew in a few short days! I'm loving watching this "science experiment" with my body. My mom told me to just get ready cause it's about to grow a lot more! 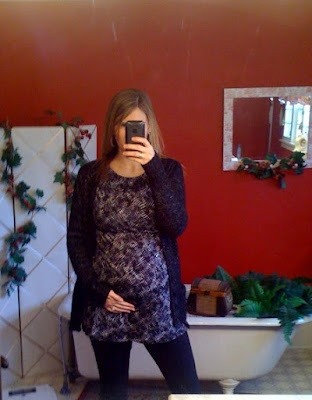