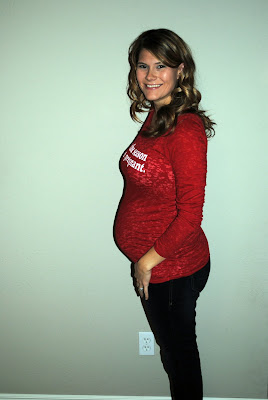 How Far Along: 24 weeks (actually I'm 25 weeks tomorrow but I like to recap the week before)

Total Weight Gain/Loss: Well last week at the doctors office it appeared that I had gained 18 pounds, then I have weighed myself a couple of times after that and I have come up with only 15 pounds. Including weighing myself on the Wii Fit and we all know the Wii fit don't lie. So who really knows? I did have a sweater and boots on the day I weighed myself at the doctor's office so it might have been off a bit. I need a scale at home so I can weigh myself in the nude.

Maternity Clothes: All maternity pants. Shirts are a combination of regular and maternity. But getting to be mainly maternity.

Movement: I've been feeling him more and more lately. It doesn't feel like swift "kicks" it mainly just feels like he's rolling around all in there.

What I miss: I have started to miss diet coke a lot. I was drinking regular coke but cut that out once I hit 18(ish?) lbs so now I just miss coke in general.

Cravings: Nothing in particular. I honestly feel like my eating habits have been the same minus a few cravings here and there.

Symptoms: I thought my heartburn was bad last week but this week it has been AWFUL. Like so bad my eyes will start watering from the pain. Also, insecruity....does that count as a pregnancy symptom? Comments from other people sure don't help.

Best Moment this week: Purchasing the nursery furniture! It's so exciting to start getting things ready for our sweet little Eli!

And my favorite husband quote of the week:

I don't have an exact quote from Luke this week, but it was fun to talk about what Eli would be doing this time next year at Thanksgiving. How he will be 8 months old and probably moving and scooting all around. So fun!
Posted by Megan at Tuesday, November 30, 2010