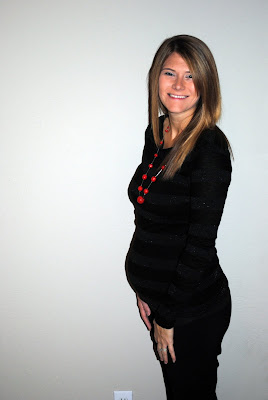 I realize that I make a disclaimer about every picture, maybe I'm insecure. Whatev. But I have to tell you this is a weird picture, I look like I'm trying to be sexy with my hair in my eyes or something. I can assure you I'm not. Truth is Luke was in a hurry and we basically had one shot. This was it. Fun times.
How Far Along: 20 weeks (actually I'm 21 weeks today but I like to recap the week before)

Total Weight Gain/Loss: I'm up to 10 pounds! I gained 6 pounds in one month. My dr said since I didn't gain any during the 1st trimester this was ok, but if I did it again she would have to "get on to me." Snap. She also reminded me that I have Thanksgiving at the end of the month and I need to "take it easy". Um... clearly this woman doesn't know me. I never "take it easy" when it comes to food. Especially at holidays.

Maternity Clothes: Combination of both maternity and regular. This week I wore one of my favorite shirts from the Limited. I've had it since college and it is an XS. However, after I wrote it yesterday I'm guessing it is no longer an XS, but also, after my 6 pound month, I think I will never been that size again so we're ok. Plus we all know an extra small about 5 years ago is now equivalent to a large.

Movement: I feel him every so often. Still not as often as I would like. I need him to start doing some aerobics in there or something so I really can feel him.

Sleep: Sleep has not been fun. I have been waking up with this AWFUL pain in my side. I sought the advice of my trusty friend El Interneto, which told me that its because I sleep with a pillow between my legs, but not between my feet which is causing some sort of weird alignment and messing up my hips. I'm not sure how accurate the El Interneto is because he has also told me I have various diseases and that my according to the quiz I took, I'm among the few people in the world who can truly consider themselves a genius.

What I miss: I still miss my precious deli meat. I also miss not worrying all the time. I know that sounds weird, BUT now that I'm pregnant I worry about everything. The other day at the Notre Dame game I hit myself in the stomach with the bathroom stall door and then I spent about an hour worrying if it had hit Baby Tree in the head. I begged God to let me feel him move so that I would know the bathroom stall didn't hurt him. Then I went to the bathroom AND HIT MYSELF IN THE STOMACH AGAIN. I mean really.....Did I learn nothing the first time?!?! My friend told me something about how our the baby is safe in the womb and we could be carrying fragile china in there and it wouldn't break - but it still doesn't stop me from not worrying. I have always worried enough about my own sanity/health. It's hard to worry about another human being. And for some reason I have a feeling that won't go away once he is here......


Cravings: Nothing in particular this week. Just food.

Symptoms: Just the insane pain in my hip. Ouch.

Best Moment this week: Going to Chicago with Luke's family. We had a really good time. Baby Tree has now been on a trip in September and a trip in October. I told Luke we need to take him somewhere really good in November!

And my favorite husband quote of the week:

Geez....somebody is getting a little sensitive about their hair.
Posted by Megan at Wednesday, November 03, 2010