Truth time: I've been sitting here for about an hour trying to figure out how begin this post, but I have absolutely not idea what to say.

It could due to the fact that this is a completely boring and pointless post but I like to document our changes to our home, plus I don't think I can make every post pregnancy related, that might get boring.

So here we go, our story of how we (Luke) got rid of an ugly room.

We have (had) this weird sun room/room full of rotting wood and nails on the back of our house.

The previous owners turned the back porch into this makeshift "sun room". The living room windows look out into this "sun room" and we never open our window because this room was so horribly ugly.

I, however have mixed feelings about this room. You see when we moved into the home we immediately made a decision to get rid of that room. Actually we decided to get rid of it before we moved in, from the moment we saw the house we knew it was wretched and did not belong.

Then a neighbor told me about how the previous owner was in his 80's and built the sun room for his sick wife so that she wouldn't get bit my mosquitoes when sitting outside enjoying the day.

Doesn't that sound like a story that you see on you tube?

So I of course then had an emotional connection and expressed to Luke that I did not want to tear it down.

Yes it served as a giant eye-sore to the house, yes it blocked sun light from coming into our living room but it was built with some poor man's BLOOD, SWEAT, and TEARS. This sun room was not coming down on my watch.

That is until Luke and his parents tore it down on Friday.

Apparently Luke doesn't care about old sweet men who love their wives like I do.

Now that it's down I have to say I am SO glad it's gone. Our living room is so much brighter and it was just plain ugly.

I just try to pretend the story that the neighbor told me was just a made up story to tug at my heart strings.

Here is the room before: 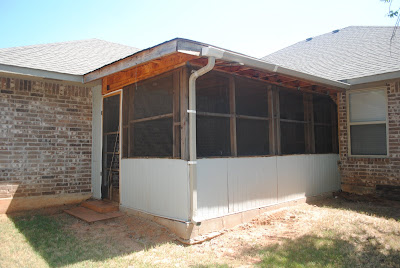 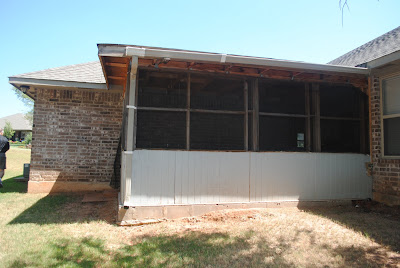 The inside of the room, which I might add is the worst picture I have ever taken in my life, let's just pretend that its artistically crooked, instead of proof that not only do I not know how to work my camera but apparently I have no idea how to hold it. (those back windows look into our living room) 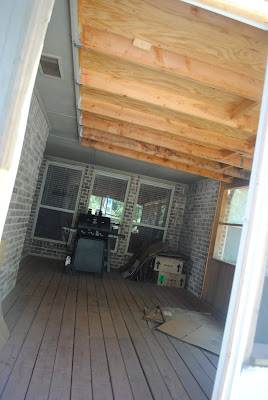 Tearing it down. Such a cute little worker: This picture sort of makes Luke look like he has a big butt, which I can assure you he does not. But I also feel ok saying that since my butt is growing at a record speed. 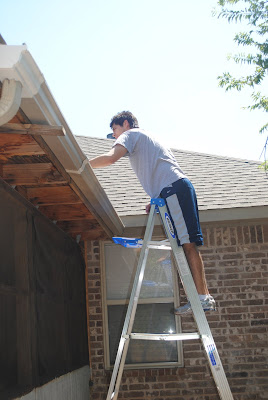 Obviously it still needs some work. We need to stain the wood, and put up a rail and plant some flowers, but for now it's much better than it was before.

I heard some really mean man who doesn't like kids and only lived with cats built it.

At least that's what I choose to believe. 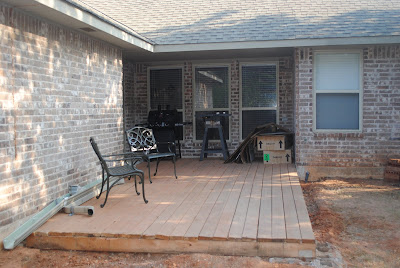 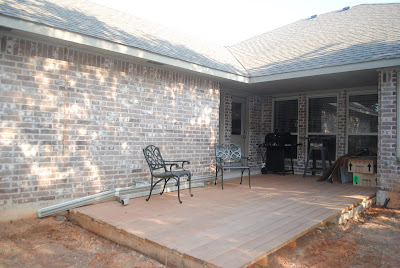 That rain gutter just chilling on the ground sure looks nice. So do those moving boxes in the corner after we've been in our house for almost six months.

The Tree's keep it classy around here.

Also while Luke's parents were here this weekend they bought us some new patio furniture for our anniversary present.

I'm still shocked by this whole buying other people an anniversary present but I definitely appreciate the generosity.

Those two chairs on the back porch were new and then we put a cute bench and table on the front porch: 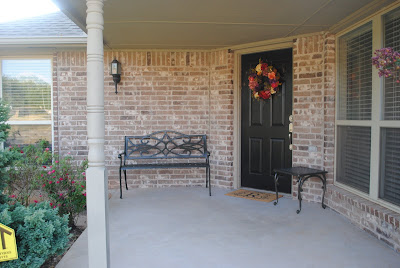 I love it! I plan to get a Fallish wreath and put a potted mum on that table.

So ready for Fall!

So that was our latest house project.
Posted by Megan at Tuesday, August 31, 2010