We survived the Ice Storm 2010!
However, I feel like I need to admit that all of the food from the picture in my last post is gone.
Hi, my name is Megan and I like to eat. A lot. Especially when I'm bored.
There I fee better.
Friday we did not leave the house at all. It was sleeting and snowing outside and I do not leave when it does that.
I mentioned before that Luke wanted a new TV, well when he called me Thursday on his way home from work he said he was going to go price new TVs.
The weathermen were practically YELLING at people to get in doors and stay there and get off the roads and my lovely husband was driving around pricing TV's.
He got home about an hour or so later with no new TV, but instead he brought this with him 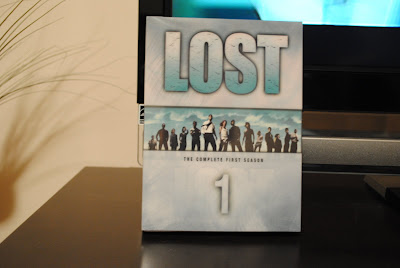 My friends, this is the best TV show EVER.
Lost season one kept us entertained throughout the Ice Storm 2010.
I have said it before and I will say it again, TV on DVD is the best invention ever.
What show would you choose to keep you entertained during an Ice Storm? The kind that makes you snuggle up on the couch and you could sit and watch the whole series and not move.
Or, am I the only one that could do that? I tend to be lazy on snow days.
Oh and if you watch Lost who is your favorite character?? I must know.
Posted by Megan at Monday, February 01, 2010