After 17 months of being married, and 17 months of procrastination I finally went and had my name officially changed.
I feel like a new woman.
I can't pinpoint exactly when it started but for some reason, somehow, somewhere in the past 17 months I developed a PHOBIA of getting my name changed.
It had nothing to do with commitment, or Luke or the actual last name, I was living the life of a Tree in every way, just not according to the government.
Which kind of seems like a crime or something. Hm...
Anyways, it was something that I kept saying I needed to do and then the thought of driving to the office and sitting there sounded horrible.
Pretty much every married girl that I had talked to made it sound like they went to hell and back to get their name changed.
And I had no desire to go to hell and back. So I continued to fake being a Tree.
I mean my blog name is Tales of the Trees, how much more official does it get than blogger?
But after about 20 panic attacks at different times I realized that I needed to get my name changed if I wanted to continue my life as a Tree.
I had too many different names floating around and I was beginning to think it might catch up with me someday.
Although it was sort of exciting to feel like a character from The Bourne Identity or something.
I have no idea why I just picked that movie. It just seemed appropriate.
Anyways......
I took off Friday afternoon and begged Luke to pleeeeeeeeeeeeeeeeeeeease go with me since he has Friday's off.
We arrived at the office around 1ish I took my appropriate number and sat down for what planned to be hours.
I had asked Luke to come so that he could keep me company during this trying time.

So here he is "keeping me company" 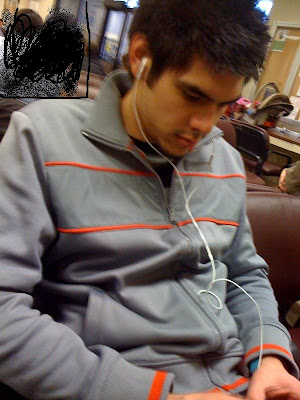 In case you're wondering as soon as we got there he put his headphones in his ears and started reading a book.
If that's not true love than I don't know what is.
We had been there for about 5 minutes when I realized that my bladder was about to burst. I gave my number to Luke and told him to listen for it, knowing that my number wasn't going to be called for another 6 hours.
I then went to the bathroom. We will not discuss this bathroom. If I develop a disease in the next 2 months I will know where it came from. That bathroom. I was thankful to be wearing a scarf because I used it as my face mask.
I came back to the holding room (or waiting room) to find Luke all in a tizzy. They had called my number but he didn't know who had called it and they moved on to the next person.
All I have to say is, "If looks could kill".
I'm pretty sure I made a baby cry from the way I looked at Luke.
He had one job, ONE JOB.
I may have even contemplated not taking his name at that moment.
So after trying to problem solve and walking around in a circle trying to figure out what to do, they finally called my number again.
And I looked at Luke like he better thank his Lucky Stars.
I eventually I got everything taken care of and finally changed my name.
Here I am so happy to have it done, and only a little bit mad at my lovely husband, all while wearing my red face mask. 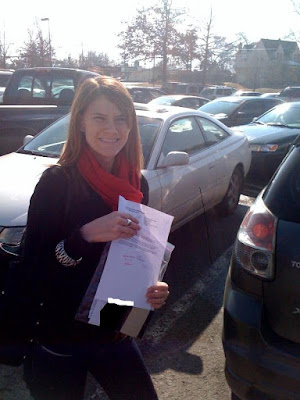 And it only took 17 months of procrastination, a 15 minute drive to the building, 1 almost throw-down with the husband in the waiting room and a 30 minutes wait.

Thats what I call success.
Posted by Megan at Friday, February 05, 2010