The other day I made this pot pie: 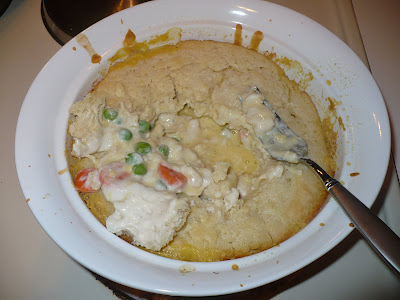 And I was very excited to eat it. Until I realized one little thing.

The chicken broth I used was expired.

Well, not expired by the date, but expired by the fact that I put an opened thing of broth in the pantry and not in the refrigerator, where apparently it was supposed to go.

And I didn't realize it until I had prepared the pot pie and it was in the oven cooking away just waiting to be eaten.

When I figured out that I had used 'bad' chicken broth I did what any normal person would do.

I got on google and researched if to see if it would still be ok to eat.

Then I got on WebMD to see what the side effects would be if we still ate the pot pie.

Just kidding about that last part. But WebMD did tell me the other day that I need to start wearing a neck brace at work. But I'm trying to go a whole month without going to the Dr. so I can't ask him about that one just yet.

Anyways between google and 2 calls to my mother and grandmother we concluded that this beautiful pot pie was indeed toxic.

So here sat this lovely, delicious-looking pot pie, made with lots of hard work, love, and frozen veggies, that we couldn't touch.

There was no way I was going to risk it, and I knew that my food crazy hubby wouldn't touch it with a ten foot pole.

In fact when he looked at it he said, ewww it even looks expired.

I had to explain to him that the chicken broth looked NORMAL that's why I still used it. This is what pot pie is supposed to look like (and if you're thinking, "no that's not what my pot pie looks like" don't tell me).

Over the last year I have really found a love for cooking that I never knew I had.

I love researching new recipes and trying them out, and most of the time I do a good job.

However there are times that I have slip ups like this, where I am close to poisoning me and the hubs.

Does anybody else ever have moments like this in the kitchen? Where your mind completely slips and you make a dumb mistake.

For the record I made a new non-toxic pot pie the next night and it was delish.

And I'm looking for a neck brace online.

Labels: Time in the Kitchen