Well Thanksgiving 2009 came and went and I totally didn't take one picture.

I dont know who I am or what happened to Megan but I'm sure she will be back to her normal obsessive picture taking self soon.


We had a nice and relaxing Thanksgiving spent with family and food. My two favorite F's.


We also spent some of Thanksgiving watching Football but I did not enjoy that part.


Oh I lied. I do have a picture. I took it with my phone.


Thanksgiving night Luke's parents (the Big Tree's) and I were wanting to watch Christmas Vacation but Luke just had to watch his beloved NY Giants.


This was our compromise. Two TV's. 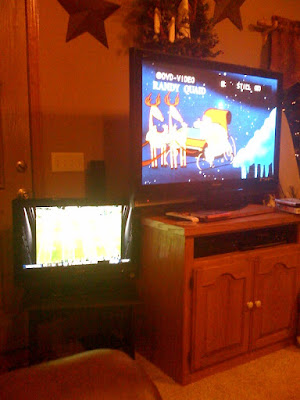 
I might consider putting two TV's in our living room at home.


Also on Thanksgiving break something sad happened. My laptop completely decided to die.


I knew it was going to happen soon but I was hoping I had another good year left in it, but alas I did not.


The reason it died was partly my fault, because instead of leaving it in one spot so that it could "survive" a bit longer I attempted to transport it.


It was all in the name of Twilight. I was determined to watch Twilight in the car from my laptop.


Well that never happened because it died.


There may have been some hyperventilating and "freaking out" wondering how I was going to blog (and perhaps watch Twilight that night).


But eventually I calmed down and realized there are bigger things in life than computers and vampires and werewolves. And blogs.


The next day my amazing hubby decided I could have my Christmas present a little early. I'm sure it had nothing to do with the fact that he was sick of hearing me whine and complain about my broken computer.


My present was already wrapped and waiting for me.


So, I am now typing to you from my brand new very own Macbook.


I had joked around with Luke about him getting me one but never really thought he would.


He is much too good to me.


Which is why we have watched nothing but football since I received my gift.


And it is also part of the reason why I have not blogged in a couple of days. I am still trying to figure out how to use this crazy thing. Luke has a Mac and I use it occasionally but up until last Friday I was simply a PC girl. This is going to take some getting used to.


I hope everybody had a great Thanksgiving!
Posted by Megan at Monday, November 30, 2009