*Edit: Apparently the Fall Equinox happened in September, this was just an effect of the Fall Equinox, please just humor me with this post. I was never good with Science (or whatever subject this would have been). Thanks and love*

Did you know that tonight (Thursday) is Fall Equinox?

Did you know that on Fall Equinox your broom will stand by itself?

I received a call from my BFF and Partner-In-Crime Tambra casually asking me if I had tried to stand my broom up.

I really didn't know how to respond to that question.

So I didn't, I just say there in silence.

To which she replied "I guess not, go try and stand your broom up on a hard surface"

She then told me that she was looking at her broom standing straight up.

So I went to the kitchen and got my broom.

And attempted to get it to stand up while Luke watched me like I had absolutely lost my mind.

After my broom hit the ground for the one hundredth time I decided she was pulling me leg and I wasn't falling for it.......anymore.

So she sent me this picture: 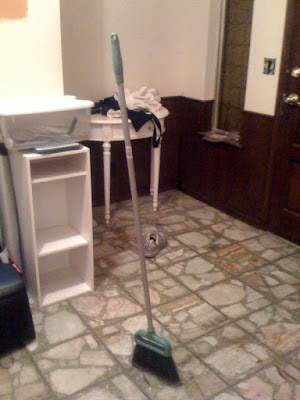 OF HER BROOM STANDING UP BY ITSELF.

After I got that picture I was determined to get mine to stand up. I tried for awhile longer and even went outside but could never get mine to cooperate.

Maybe its because my broom is hardly ever used so it really didn't know how to perform when needed.

And proved another reason why I need to get out of this apartment. Even my broom is so sick of this place it won't stand up straight on the appropriate Fall Equinox night.