Sunday was a day of minor misfortunes. Nothing big just minor and kind of funny.
The misfortunes:
#1 The Key:
It was Sunday morning and I was running late to church, which I hate to do because there is nothing worse than walking into church late and having your husband shake his head at your tardiness while on stage. Actually he doesn't really shake his head but I can tell what he is thinking just by looking at him. Or maybe its just my guilty conscience getting the best of me.
Whatever the case is, I woke up late and I was running around like a crazy woman trying to get to church on time.
I fixed my hair, gathered my belongings, ran out to my car, put the key in the ignition and this happened: My key completely and utterly fell apart. Please see below: 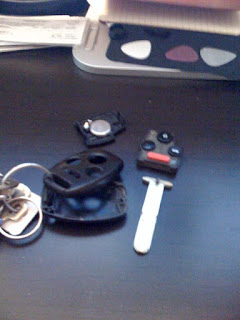 And contrary to what my dad thinks yes, it did just fall apart. I did not step on it, I did not drop it I simply put it in the ignition and it fell apart. And in case your wondering, it doesn't work like this, it has to be put together for some weird reason.
#2 The Pants
Yesterday afternoon I did something completely traumatizing. I guess I thought I was feeling a little too peppy that day and needed to bring it down a few notches. For some strange reason that I will never understand I pulled every pair of pants out of my closet and tried them ALL on. Some of them I have had since junior year of college, and some of them were just a wee bit too tight.
Normal people don't do this, I still don't know why I did this. Who tries on all of their pants?!?! Especially after being married for a year and gaining that lovely 'marriage weight'.
#3 The Candle
Yesterday we had some friends over for dinner, so as I usually would do I put a candle on the candle burner so that it would melt and radiate a pleasant aroma into the air.
Later that night I forgot it was still on, however I was reminded it was on when a picture frame fell off the top shelf and knocked the candle over, spilling the wax EVERYWHERE. Have you ever tried to clean up wax? You would think it would just peel up. No. No. it does not.
It made such a mess: (you can see it splattered on the wall on the left side) and it was all over the carpet - actually I say was, it still is. 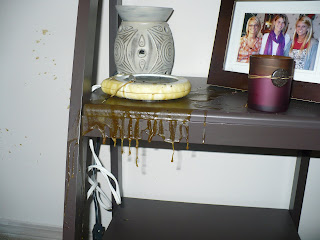 On our honeymoon picture album: 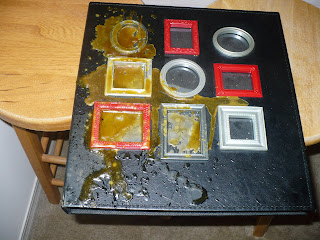 I have to be honest and tell you that I just left the wax like that and went to bed. I was so tired and the wax was already dry, I knew it would still be there the next day.

Which it was, and I am still trying to scrape up with a knife.

And as for the key, after my husband found out it would be over $100 to replace it, he decided we would glue it back together.

I'll let you know how that goes.