This weekend we celebrated our One Year Anniversary!
I know that everybody says it, but seriously I can't believe it has been one year already. It feels just like yesterday when we drove away from the reception and began our life together as husband and wife.
Seriously, crazy.
This weekend we had a couple of weddings to go to in Luke's hometown so we headed out on the road Friday afternoon.
We arrived in town just in time to get some of the best pizza ever. Because it was our anniversary weekend we decided that calories don't count and are non-existent.
Which would explain why we woke up on Saturday morning and headed to the donut shop to get some chocolate donut holes.
Later that afternoon we headed to the first wedding.
Here I am with my husband of one year after the wedding: Please forgive my husband's shirt. He literally un-tucks it between the ceremony and reception of EVERY wedding we go to, he acts like wearing a tucked in shirt is the most uncomfortable thing in the world. It's a good thing he doesn't have to do it for his job everyday! 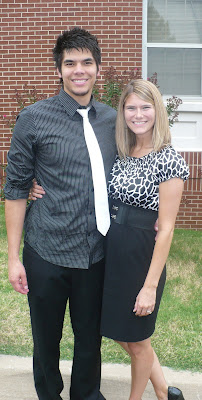 After the first wedding we went home and changed for the second wedding. It was just a reception because the couple got married in Hawaii, so it was a very casual event.
I wore a new dress I got a F21 (yes I got over my bitterness towards them and I am shopping there again). I LOVE this dress. I wish I had it in every color! So cool and comfy. Just my style! 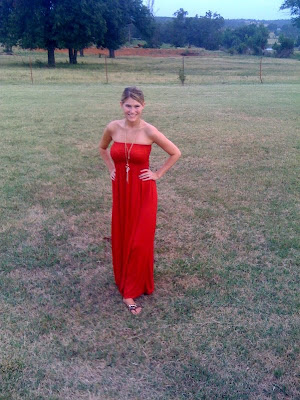 Today (Sunday) is our actual anniversary but it felt just like any other day. We decided not to get each other gifts because we are going on a trip, so instead we gave each other cards.
Luke's cards always make me cry, he always has the sweetest words, even though he has to read them to me because I can't read his writing!
After our cards we had a piece of our year old wedding cake.
My mom was in charge of storing the cake after the wedding and she took her job SERIOUSLY. She researched exactly how to store it so that it would taste the exact same as the day it was made.

It took me about 5 minutes just to get to the actual cake. There were several layers of foil. A picture of it after I unwrapped it: 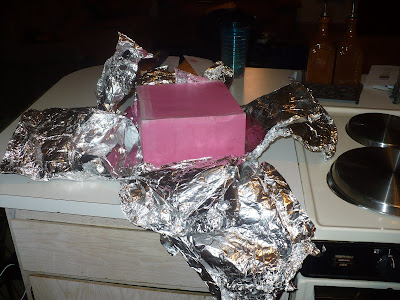 Inside the box the cake was wrapped even more, but we finally found it! 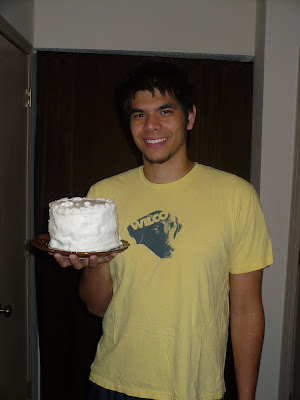 It was so good! Really good! Luke had two pieces....I just hope we don't get sick tomorrow.
It was a great weekend! I am so thankful for the past year and thankful for my amazing husband!

Hope you had a great weekend!