This weekend was filled with lots of traveling, fun, and having more Michael Jackson song's stuck in my head then I have ever had in my life.

As a self proclaimed entertainment news junkie, I have been glued to all of the news shows about MJ's life. It is all just so sad.
However, I wasn't able to watch as many as I would like (which is probably a good thing) because we were out on the open roads a lot this weekend.

Thursday afternoon Luke and I headed to Dallas for a little getaway. We were in Dallas traffic (which I firmly believe is straight from the devil himself) when we heard the uncertain news.
My eyes were stuck on my phone going to various entertainment news websites trying to find out what was really going on. Was it just a rumor? Was he in a coma? What was going on?!?!

Apparently everybody in the world was doing the same thing because none of the websites were opening. I really don't know how to live anymore if I can't access the Internet while traveling down the highway.
There were so many different news stories going around, it was hard to figure out what was really going on for sure, until I read Ryan Seacrest's tweet with the official news. I know that Ry Ry's words are as true and pure as gold.
Luke and I enjoyed our time in Dallas. Although I don't remember much of it, because anytime we were on the roads I made it a point to not look up in fear that I would see my life flash before my eyes.
I realize that I am making it sound like I'm from a one traffic-light town. I'm not. However I promise you I would never be able to drive in Dallas traffic.
My whole body tenses up when I have to merge into traffic going EIGHTY miles per hour and that happened a lot this weekend.

In fact I usually go a little crazy even when I'm in the passenger seat and Luke has to merge onto traffic.

He says I act similar to a cat locked in a car clawing and clinging to the walls trying to get out. That's a bit of a dramatic over-exaggeration if you ask me.

If I keep my eyes closed I am cool as a cucumber.
Friday after our Dallas Getaway was over we headed to Luke's parent's house to celebrate his mom's birthday.

Saturday Luke and his parents headed outside to work cattle. Yes, I said cattle. I have no interest in going near something that could potentially run me over in a split second, very similar to how I do not enjoy merging into oncoming traffic. All things come full circle.

Luke's dad told me that I should have helped them work cattle, I could have become a true cow-girl. This is how I felt about that: 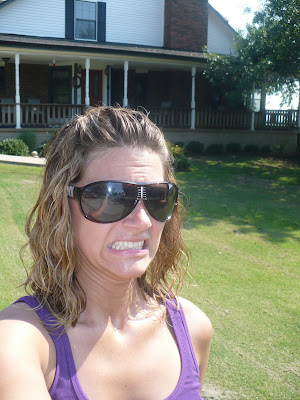 Sunday night after we were back home and cattle free, we went to dinner to celebrate our friend Jayma's birthday.
Me and Jayma: 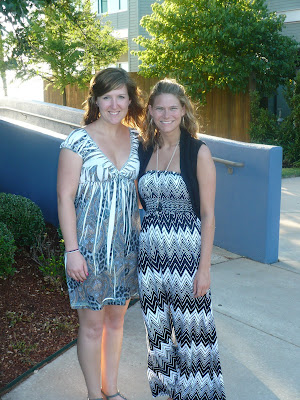 One of my blog friends Candice is best friends with Jayma, so it was fun to hang out with her for the night and share laughs!
Jayma, Me, Candice: 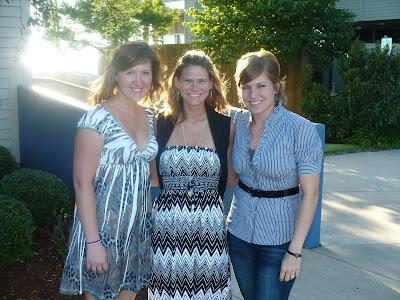 Then me and Luke went to see the movie The Proposal. It was really good and worth seeing in the theatre in my humble opinoin. Luke may have a different opinoin.
Hope you had a great weekend! I'm pretty sure I have the dance moves to Thriller memorized after waching the video atleast 15 times this weekend.