Birthdays and a Wax Rash

WOW! I am so relieved to know that so many of my blog friends can relate to my cooking fears. It seems that chicken won out as the most feared food to cook in the kitchen, and none of us are too scared to call our momma's when in dire need of some cooking advice. No matter how silly it seems.

And by the way, you all scared me A LOT WORSE than I originally was about chicken. After reading your comments I'm pretty sure my chicken is overcooked every time I cook it.

Tonight I took a much needed break from the kitchen and went to a friend's house.

My college friend Jamie had a party at her house celebrating her birthday. Luke and I had not seen Jamie, her husband, or sweet baby girl in awhile so we were excited to join the birthday fun.

We had a great time!

Jamie, her sweet baby girl, and me: 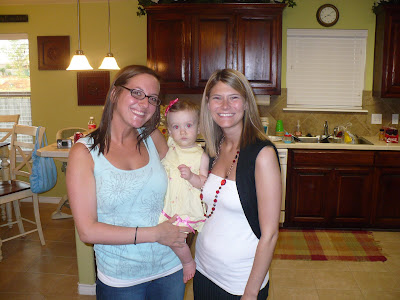 Luke and I walking out the door for the party fun! 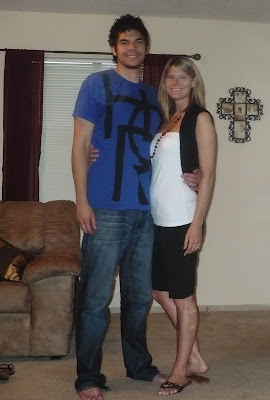 It was a great night!

In other non-related news: I have a confession: I seriously scarred my husband's face. Well maybe not scarred, but I did cause some serious temporary damage.

I think my husband is a beautiful man, but the boy has some crazy bushy eyebrows. Last year before our engagement pictures he took a little advice from his sweet fiance and got his eyebrows waxed, only to break out in a crazy rash a day letter. This was when he swore off waxing his eyebrows forever.

One year later a friend from church mentioned that her licensed sister would be in town waxing eyebrows and she had special wax for sensitive skin.

Thinking of my husbands brow's and how they were starting to get slightly out of control, I decided it was time for Luke to be taken off of his waxing-hiatus and I signed him up for a good eyebrow waxing.

Every well manicured man has a good woman behind him.

And please remember Luke is on a stage every week. It is my God-given role to make sure he always looks his absolute best.

However, it seemed that my brilliant scheme backfired.

Two days later, he had four very defined 'strips' of rashes on his face.

I begged him to let me take pictures for the blog, but he said 'nobody wants to see that'.

He is probably right, but really, we should have his wax-rash documented for future children to see forever.

I was sure that this was the last straw and my hubby was done with my 'brilliant schemes' when he then said these words:

People, I have created a monster.